According to the Conference Board of Canada’s economic outlook, there will be weakened growth in Central Canada, Manitoba and Alberta. —while Atlantic Canada, B.C. and Saskatchewan will see increases.  Reuters photo.

According to The Conference Board of Canada’s Provincial Outlook: Winter 2019, weakening growth in both consumer and government spending will impact provincial economies.

Alberta, along with Quebec, Ontario and Manitoba, will experience more modest economic growth this coming year. However, the Conference Board of Canada says other provinces will enjoy stronger growth despite current uncertainties, including P.E.I., which is leading with an expected growth rate of 3.2 per cent in 2019. 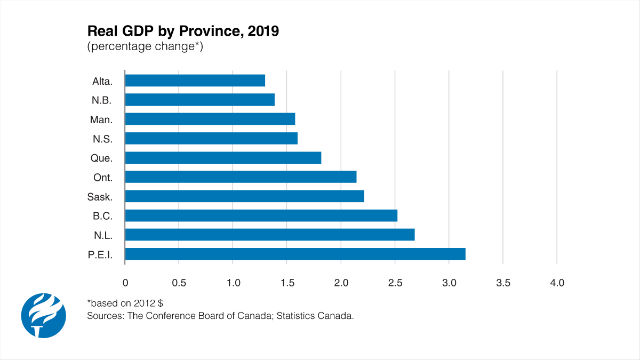 “The Conference Board of Canada expects Canada’s GDP to advance by 1.9 per cent in 2019,” said Marie-Christine Bernard, Director, Provincial Forecast.

“Overall, the outlook is mixed, with growth slowing in many regions of the country including Quebec, Ontario, Manitoba and Alberta, and the same is expected in 2020.”

Bernard adds “Atlantic Canada, Saskatchewan and B.C. will enjoy an increase in growth this year—despite the fact that there is easing in consumer and government spending.”

The Conference Board of Canada forecasts Saskatchewan’s trade sector will get a boost from rising global demand for potash, oil and agricultural products.  The think tank says the increased demand for its key commodities will boost the province’s economic growth to 2.2 per cent this year.

In Alberta, cuts to oil production and the declines in energy investment will slow economic growth to 1.3 per cent this year.  Despite the uncertainty in Alberta’s energy sector, employment in Wild Rose Country is expected to increase by 1.1 per cent in 2019.

Strong investment in British Columbia’s energy sector will help offset a correction in the housing market.  The Conference Board of Canada forecasts BC will post real GDP growth of 2.5 per cent this year.

Other highlights from The Conference Board of Canada’s Provincial Outlook: Winter 2019 include: