Summary: Markham interviews Sam Abuelsamid, engineer and EV analyst for Guidehouse Research, about Toyota’s new solid-state battery, which will have 500 kilometres of range and can be recharged in just 10 minutes.

This interview has been lightly edited.

Markham Hislop: Stories were emerging from Japan last week, about how Toyota plans to introduce a solid-state electric vehicle battery by 2025. Now, this would be a real game-changer because now we’re talking about 500 kilometres of range and a charge time of only 10 minutes that basically puts it in the same kind of performance category as an internal combustion engine car. And so to talk about this, we’re going to be discussing it with Sam Abuelsamid of guide house research. So welcome to the interview, Sam.

Sam Abuelsamid: Hey Markham. It’s good to be back again.

Markham Hislop: What’s your response to this story about Toyota’s impending announcement?

Sam Abuelsamid: What we are likely to see sometime next year is probably a concept vehicle that features solid-state batteries. We’ve actually been getting reports for probably about at least two years that Toyota’s working on solid-state and plans to introduce it in the first half of the twenties. And, you know, as we’re getting closer, it’s all starting to solidify. We’ll probably see the first concept next year, sometime.

Markham Hislop: Maybe you could explain, the different types of battery. What is a solid-state battery? How does it differ from the current lithium-ion batteries? 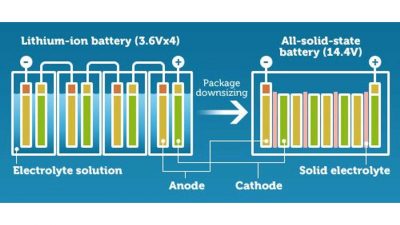 Sam Abuelsamid: So it is still a lithium-ion battery. The key differentiator is the electrolyte. The batteries that we use today typically have either a liquid or gel electrolyte that after you pack the, the anodes and cathodes and the separators into the cell, you fill it up, inject it with this electrolyte material that allows the electrons to flow back and forth, and that electrolyte material, that they use today because it’s not solid it’s possible for things to penetrate through it.

For example, if you have a short circuit in the cell, it can allow anodes and cathodes to touch each other to create a short circuit. And that’s what leads to your thermal runaways or your fires. And because the electrolyte material contains oxygen when it heats up, it gives off oxygen that feeds the fire.

It makes it hard to extinguish a battery fire. With solid-state electrolyte material, after you inject it into the cell, it cures and it solidifies, and it basically becomes like a ceramic material and essentially the entire cell becomes a solid block. Now things can’t penetrate and cause short circuits in there and that makes the battery to be more stable, allows you to charge at a much faster rate. Now you can get that 80% charge in 10 minutes that they claim without causing damage to the cell.

Markham Hislop:
Well, let’s talk about those performance claims because 500 kilometres of range and 10-minute recharge, it’s kind of like been the Holy Grail of battery technology. Are you confident that Toyota will hit those numbers? 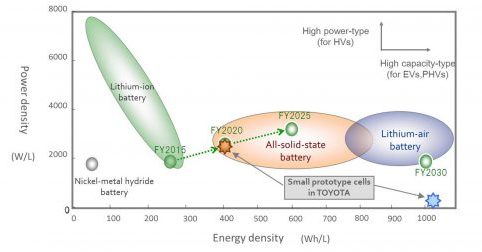 The thing that has been the big stumbling block so far for a lot of these companies is actually scaling up production.  What everybody’s been able to do is produce small sample sizes, smaller cells, but scaling that up to a full-scale battery, for a vehicle has proven to be much more challenging. Solid-state cells are actually what Dyson wanted to use in their proposed EV and they eventually abandoned it because they could not get that scaled up.

If we can get the manufacturing scaled up so we can get a vehicle-sized battery then it’s definitely possible.

Markham Hislop: I’ve been interviewing, battery scientists for the last five years and these newer chemistries have been in the lab for, you know, five, 10, 15, 20 years. It seems to me
that all of the battery advances that we’re seeing – and 2020 has been a huge year for battery announcements – it’s all been around the engineering. Is that a fair thing to say?

Sam Abuelsamid: Yeah. You know, figuring out how to, how to manufacture these things at large volumes and while also keeping them, stable and safe is the big challenge, you know, and how to reduce the costs. So, we understand how lithium ion cells work and how to make them better, but now it’s a matter of how do we do it in the volumes required to build, you know, 80 to 100 million electric vehicles a year. That’s been the big challenge.

Markham Hislop: Is it likely that we’ll actually see these new batteries introduced in production cars? We’ve been talking about GM’s Ultium battery (watch Markham’s interview with Sam about the Ultium), we spoke about that a couple of weeks ago and now we’ve got the solid state from Toyota. Are we going to see the anticipated sticker price parity with internal combustion engine cars by the mid 2020s?

Sam Abuelsamid: I think that’s very plausible. There’s a strong chance that we’ll get there.

GM is claiming the Ultium will get to price parity just with lithium-metal batteries, even before they get to solid-state. Certainly solid-state cells are another step that’ll help in that process. And GM’s also working on solid-state like everyone else. I think it’s certainly plausible that we’ll get there in that timeframe.