Legge, Business Council of Alberta, emerging as an important moderate policy voice during a time of immoderate policies

“We’re encouraging the federal government to view Alberta, and the county’s largest resource industries, as a welcome partner in a green recovery. These aren’t just Albertan ideas, or even western ideas; these are ideas that are broadly supported by Canadians of all types across the country,” says Adam Legge, president of the Business Council of Alberta, after releasing an IPSOS poll Friday showing that economic concerns are top for Canadians as the country recovers from the COVID-19 pandemic.

Alberta as a welcome partner in a green recovery? An actual working relationship with the Trudeau Liberals? And perhaps the most radical idea floated in Alberta since April 16, 2019 (the date of the last election): that natural resource industries should be encouraged to grow if “they are working toward fighting climate change.”

This is almost revolutionary, at least for the 2020 version of Alberta.

The more common narrative can be found in the letters sent by the ultra-right-wing Buffalo Project to policymakers earlier this week claiming, “The ‘Green Recovery’ plan promised by the West’s representative in cabinet, Finance Minister Chrystia Freeland, may be the undoing of our industries as we know it.” The Buffaloed are asking MPs and senators to block the recovery plan. This apocalyptic demagoguery is utterly unmoored from the reality of the global energy transition and the international commitment to combat climate change.

Legge is asking for a more sensible approach. He even comes armed with data to buttress his case.

The most important takeaway from the poll is that Canadians are worried about the economy, want Ottawa to prioritize recovery, but also want climate policies to be an important part of the policy response.

“These numbers point towards a broad consensus among Canadians on their priorities, and the fact that they want to see an inclusive recovery,” Legge in the media release. “Canadians are looking for a recovery that includes both the environment and economy, includes every region in this country, and includes the natural resource sector.”

Importantly, he calls on “business and political leaders alike to work collaboratively to deliver that recovery.” The focus on collaboration stands in stark contrast to Premier Kenney’s “fight back” strategy, which to date hasn’t produced the promised results – investment and jobs – but has generated a lot of political friction with Ottawa. Newly elected CPC leader Erin O’Toole advocates a similar approach at the federal level. 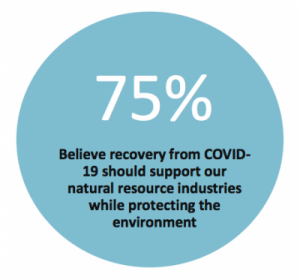 Support for switching from bridge-burning to bridge-building appears to be growing within the Alberta business community. Several months ago, Suncor CEO Mark Little co-authored a Corporate Knights op-ed in which he touted the collaborative efforts of groups like the Energy Futures Lab, which “shows what’s possible when we seek common ground and use past and current strengths to build what the future requires of us.”

He also called for federal leadership to support “disruptive innovation” in the Alberta-based oil and gas industry. Specifically, the creation of an independent agency like Premier Peter Lougheed’s AOSTRA (Alberta Oil Sands Technology and Research Authority) that “unlocked hundreds of billions of dollars of value from the oil sands in subsequent decades benefitting all Canadians.”

Surely it’s no coincidence that Suncor is a member of the Business Council of Alberta? Canada’s largest integrated oil and gas company has august company: Cenovus Energy, ATCO, ATB Financial, TC Energy, and many other titans of Alberta industry.

In April, the Council wrote Premier Kenney about how to successfully re-open the Alberta economy after the COVID-19 pandemic. Suggestions included creating a 20-year “economic and industrial strategy,” and re-examining “Alberta’s short- and long-term fiscal model in light of reduced revenues.”

In this April 30 video interview with Energi Media, Legge didn’t flinch from suggesting Alberta might finally need a sales tax. These days that’s a bold stand.

In today’s interview, I asked him three questions: 1) to provide an overview of the poll and why the data argue for a collaborative approach with Ottawa that includes supporting expanding resource industries that are working to reduce greenhouse gas emissions; 2) if the Council is intentionally positioning itself as a moderate voice on energy and economic policy? 3) if the Council’s board fully supports that position? His answers were instructive (readers can watch the interview above).

The thoughtful CEOs who understand the existential threat posed by the energy transition and climate change, and the need to act now, want change. They’ve chosen Adam Legge to communicate their message. Energi Media wishes him God speed because he has been given a daunting task.

Readers interested in a moderate, optimistic vision for Canada’s energy future may want to read The Energi Declaration, which includes a link to the Hydrocarbon Vision. Please sign the Declaration. Your support for a different energy vision and narrative is important.