As junior oil sector collapses, dragging down services industry and other suppliers, leaders like Buffalo Project retreat into Trumpian populism instead of confronting challenges

The Buffalo Declaration can only be understood as a form of populism rooted in Jason Kenney’s bid to unite Alberta conservatives and defeat Rachel Notley and the heathen NDP. 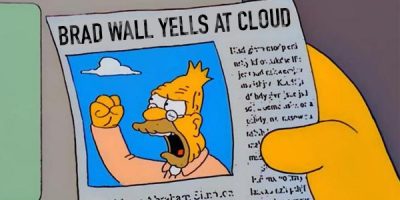 Like all forms of populism, the Alberta variant requires fearful and angry voters who see themselves as victims. Think of the document in question as 13 pages of hot buttons designed to send Alberta limbic systems into DEFCON 5. Abe Simpson standing on 4th Avenue in front of the Calgary Petroleum Club, shaking his fist at clouds.

What’s making Albertans so fearful and angry? Where did all those hot buttons come from?

According to the declaration, Alberta got a raw deal when it was created in 1905 and the “Laurentian elites” have been sticking it to them ever since. Ottawa takes an unfair amount of money for equalization payments to have-not provinces like Quebec (not true), deliberately sabotages pipeline projects by “strangling” them with regulations (also not true), and treats Alberta like a “colony” (so very not true).

That is the core of the Buffalo narrative.

It’s the work of the Buffalo Project, whose board is comprised of old, wealthy, conservative men, mostly hailing from the oil patch. Former Saskatchewan premier Brad Wall is an intermittent media spokesperson, popping up on TV news shows to warn one more time that “the West” is mad as hell again and not prepared to take it anymore.

Ironically, after a token appearance early in the Declaration, Saskatchewan disappears from the narrative. This is Alberta’s show, folks.

The entire document, from stem to stern, drones on about Alberta’s victimhood. It’s as factual as a Donald Trump word salad and makes as much sense. For instance, at one point the Declaration complains there aren’t enough Alberta reporters in the Parliamentary press gallery and demands adding more Western journalists as part of the “structural solutions” recommendations.

Like Seinfeld’s “Festivus for the rest of us,” the Buffalo narrative is about grievances. The key to understanding the grievances of a province that still has the highest per capita incomes and the lowest taxes in the country is understanding the two Alberta oil patches.

The modern Alberta oil patch has two camps. In some ways, there are two oil patches. How much in common do one million barrels per day oil sands bitumen miners have with tiny companies pumping less than 10,000 barrels per day of light sweet crude and natural gas?

The easiest way to understand the oil patch “have-nots” is to watch my 10-minute interview with economist Richard Masson about the capital crisis in the junior sector, which is in the process of collapsing. While the seniors – giants like Suncor and CNRL – are highly profitable and drowning in cash, Alberta has lost 55 per cent of its smaller producers since 2016. Prospects for the next few years are just as glum.

Revenue and cash flow trouble for junior producers, however, means double trouble for service companies, especially the smaller mom-and-pop operations in rural and northern communities, and the rest of the supply chain that supports the little companies.

All those failing businesses mean laid-off workers, 13,000 in the past year alone, 36,000 since the apex of the last boom in 2014, according to Calgary-based PetroLMI. And let’s not forget the senior oil sands companies adopting new technologies like automated oil sands ore trucks and artificial intelligence software that have allowed them to lay off employees – many of them well-paid white-collar professionals in Calgary head offices – while reducing capital expenditures and growing production.

The oil patch crisis may be most acute in the natural gas sector, which has lost critical market share in Eastern Canada to American shale producers from the Marcellus and been decimated by low prices.

The situation is so dire that last July, nine gas-weighted producers sent a letter to Premier Kenney imploring “the Government of Alberta to take swift and decisive action to restore a balanced and orderly market for AECO in order to capture a fair market price for Albertans’ natural gas resource and, at the same time, help avert a crisis in the natural gas sector which could result in widespread corporate failures, significant job loss and a further deterioration in investor confidence that will impair the Alberta gas sector’s ability to participate in any future recovery.”

Unfortunately, the only possible relief for Alberta gas producers is LNG development on the West Coast, but LNG Canada’s $40 billion liquefaction facility won’t start operations until 2025.

Within this larger context, Alberta’s crippling fixation with “foreign-funded activists” and anxiety over the Wetʼsuwetʼen First Nation blockade of the Coastal GasLink pipeline begins to make more sense.

When was the last time a public company returned almost half of its annual revenue to shareholders?

The Big 5 (Suncor, CNRL, Cenovus, Husky, Imperial) produce 80 per cent of Alberta’s oil, mostly from the oil sands. They have the financial resources to contract pipeline capacity, while the juniors are forced to sell on the spot market at heavily discounted prices. Oil sands CEOs issue press releases about the climate crisis and achieving net-zero emissions by 2050, while juniors fret about making payroll, can’t pay their municipal taxes, and bitterly resent higher regulatory compliance costs that only add more red ink to their bottom line.

The Alberta “haves” are enjoying a heyday the likes of which may never be seen again in Alberta. Meanwhile, the “have-nots” are going broke.

Not surprisingly, the leaders of the Buffalo Project and the industry organizations that support Kenney’s UCP government mostly hail from the suffering segment of the oilfield. The Buffalo Declaration certainly doesn’t contain the signatures of Cenovus CEO Alex Pourbaix or Husky Energy CEO Rob Peabody or Little.

Not even the heavyweights of the Conservative Party of Canada are onboard, yet anyway. Instead, we have Twitter blocking queen Calgary – Nose Hill MP Michell Rempel and Peace River – Westlock MP Arnold Viersen, who recently had to apologize to an NDP MP after he asked her if she had ever considering being a sex worker.

This is definitely not the A team, folks, and probably not the B team, either. In fact, third-string leadership is the great underlying problem of the Buffalo Project and its farcical Declaration.

Set aside an hour and carefully read – or reread – the Buffalo Declaration. Make up your own mind about the veracity of the stories. If you have time, Google reputable sources and investigate the claims for yourself. Reasonable people will quickly spot the many, many deficiencies in the Buffalo narrative. While  you’re at it, please test my reporting and analysis. Energi Media’s website and YouTube channel are a wealth of information about the global, Canadian, and Alberta energy industries, much of it not available from other media organizations.

The saddest thing about this debacle?

Important sectors of the Alberta hydrocarbon industry are facing existential threats, but instead of grappling with the difficult issues, instead of showing real leadership in the face of a significant crisis for many Albertans, the “Buffalo wing of the CPC” – as Twitter wags have tagged it – has chosen cheap populism and victimhood over pragmatic, results-oriented solutions.

Instead of stepping up, the Buffalo leadership is demanding more Alberta reporters in the Parliamentary press gallery, that Ottawa acknowledges the devastation “the National Energy Program caused to the people of Alberta” 40 years ago, that Alberta be recognized “as a culturally distinct region within Confederation,” and ensuring that “Western art is prominently displayed in national museums.”

Oh, sure, there are other demands, like immediately approving the Teck Frontier oil sands project, but the majority of the Declaration’s “structural solutions” are so inane they’re comical.

Unwilling or unable to confront the real crisis facing Alberta, the Buffalo leadership has retreated into Trumpian victimhood and revival fantasies that require the CPC forming the national government or Alberta seceding. The same magical thinking that believed the Kenney government’s “push back strategy” and the energy war room would actually succeed.

This leadership has failed Alberta and should be called on the carpet by Albertans for that failure.

More importantly, a new generation of Alberta political leadership is needed. One that acknowledges the energy transition and climate crisis, helps the oil and gas sector pivot to the low-carbon future, puts in place practical policies and programs to support junior producers and their supply chains, and recruits allies and builds political alliances across Canada instead of alienating the very Canadians Alberta needs to thrive and prosper in the future.

And now you know just how vapid, inaccurate, hyper-partisan, torqued, overwrought, blinkered, out of touch, myopic, and downright braindead the Buffalo Declaration really is.

Correction: MP Arnold Viersen was first elected in 2015 and is not a rookie. The story has been edited to correct our error.