Follow the money. Always good advice, and if you want to know the direction the global energy system is headed in, follow the capital Big Oil is investing in clean energy. Or even the capital Canadian oil and gas companies are spending on lowering their greenhouse gas emissions in an effort to become “cost and carbon-competitive” with international competitors. As super-majors like Royal Dutch Shell tack to the new winds, Alberta must adjust its sails accordingly and be an aggressive competitor in the emerging energy system.

I ask these questions after leading a session last week on electric vehicles and the future of Alberta oil for one of Calgary’s largest integrated oil and gas companies. The seven or eight people in the presentation were all late 30s or early 40s, middle managers tasked with some aspect of the company’s future direction. 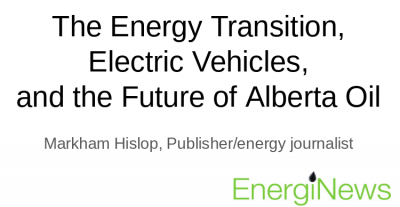 All agreed the energy system is changing and that might mean declining future demand for their products. Most thought the change would be slow, providing enough time for their employer to invest in new technologies and gradually phase out of old ones.

But several were worried change could arrive much more rapidly than expected, with devastating consequences for the company, their own careers and families, and Alberta in general.

I argued that if left entirely to market forces, the worldwide displacement of oil by electricity for transportation would take 50 to 75 years, with EVs gaining a 70 or 80 per cent market share near the end of the century.

But there are three potential technology disruptions (super-batteries, mobility as a service, and Chinese manufacturers driving down the cost of EVs like they did with solar panels) that could shorten that time considerably, with significant displacement of oil as early as the 2040s.

For Alberta oil producers, which routinely invest hundreds of millions and even billions in 20 to 40-year assets, the “three disruption scenario” is sobering.

Near the end of the presentation, I describe four scenarios, and the first one is especially sobering: “What would be the effect be on the Alberta oil sector if transportation electrification displaced five million b/d? Ten million b/d? Or even 20 or 30 million b/d?”

One of the participants immediately pointed out the obvious: that the post-2014 bust was caused by just 1.5 to 2 million b/d oversupply of world oil markets. Permanently removing consumption of five or 10 million b/d could be devastating to oil prices.

And Alberta, still a high-cost producer.

So, what to do? Everyone in the room was asking a version of this question.

Which gets us back to following the money. If Big Oil is beginning the pivot toward the new energy technologies, shouldn’t Alberta do the same?

One of the points that was lost in the public frenzy last spring when Shell Canada sold its oil sands assets to CNRL is that the Netherlands-based company long ago announced its strategy to divest of carbon-intense oil assets (like northern Alberta bitumen) and be much more heavily weighted in natural gas, which the International Energy Agency forecasts will be around long after coal (and probably oil) are in terminal decline.

The new approach explains why Shell paid $56 billion for gas producer BG Group in 2016, and why it used to proceeds of the sale to CNRL to pay off debt from that deal.

Dave Collyer, former Shell Canada executive and past president of the Canadian Association of Petroleum Producers, told me the natural gas pivot by corporate head office was probably the biggest driver behind selling the oil sands assets.

Friday’s story also pointed out that over the past five years, Big Oil has spent over $3 billion on renewables (mostly wind and solar power generation) alone.

Closer to home, pipeline giants TransCanada and Enbridge have both invested in solar and wind farms.

These are just a few anecdotes to illustrate the trend, which is that energy investors and large oil and gas companies are shifting capital to the clean energy economy.

Again, what should Alberta do?

As I’ve reported in many columns, oil sands producers are already developing and implementing new technologies to lower the carbon-intensity of their crude oil.

Now, it’s time for Alberta to shift its attention from upstream (oil and gas extraction) to downstream expansion like petrochemicals and partial upgrading of bitumen.

The global market for plastics is growing rapidly thanks to rapid Asian (primarily China and India) economic growth. The Americans – led by Texas, Louisiana, and Pennsylvania – have already invested $250 billion over the last decade in petrochemicals. And Canadians watch in envy as US LNG export facilities sprout like mushrooms while BC musters only the tiny Woodfibre plant near Squamish.

And let’s not forget the Saudis, who are investing around the world in downstream production.

The smart money is flowing into clean energy technology and non-combustion uses for oil and gas. Alberta has made a minor foray into this space by subsidizing two new petrochemical plants to the tune of $500 million.

Not only is much, much more required, but Albertans, British Columbians, and Canadians from coast to coast to coast must have an adult conversation about the future of the hydrocarbon economy that avoids the simplistic poles of stopping altogether or expanding production as if the Energy Transition is a hoax.

While Canada dithers, other nations are investing in the future. Just follow the money.