Eco-activists like Tzeporah Berman are adamant that expansion of the oil sands – which consist of bitumen that has the consistency of peanut butter and requires natural gas-fired steam to reduce its viscosity enough to extract, making for very carbon-intense crude oil – stop immediately and that a plan be put in place to phase out production within a very short time.

Given that the oil sands account for almost 10 per cent of Canada’s greenhouse gas emissions and production is slated to rise by 1.3 million b/d by 2030 to a total of 4 million b/d, her position has a fair measure of support outside Alberta.

But there is also a good case to do exactly the opposite and boost oil sands output. Why?

Because Alberta is the only jurisdiction that appears to be de-carbonizing heavy crude oil production.

Under Rachel Notley’s NDP, the provincial government has worked with industry to design regulations and standards that are likely to reduce the carbon-intensity to the same level – and perhaps even below – that of an average American crude oil, according to a 2017 study by the Canadian Energy Research Institute.

Imperial Oil’s Kearl plant, an oil sands mine, uses a paraffinic froth treatment that already produces crude oil whose carbon-intensity is only two per cent higher than the American average.

Oil sands companies using SAGD (steam assisted gravity drainage) for in situ production are busy substituting solvent (a light hydrocarbon that dilutes the bitumen instead of heating it) for steam and anticipate significant reductions in their steam-to-oil ratios.

Let’s assume for the moment that the producers successfully implement the new technologies.

About 10 million b/d of heavy crude is currently consumed by global refineries and that amount is likely to rise as Asian demand (primarily India and China) grows over the next few decades, according to Kevin Birn, director of the IHS MarkIt Oil Sands Dialogue.

Canada produces 2.8 million b/d, with the remaining 7 or 7.5 million b/d supplied by countries like Venezuela, Mexico, Colombia, and Nigeria. And, of course, California, which is usually ignored in the debate over crude oil carbon-intensity but supplies some of the dirtiest oil on the planet.

Based upon my preliminary research (which will be more extensive by the time I publish a long-term article on the topic in a few months), none of those countries is de-carbonizing its heavy crude oil. 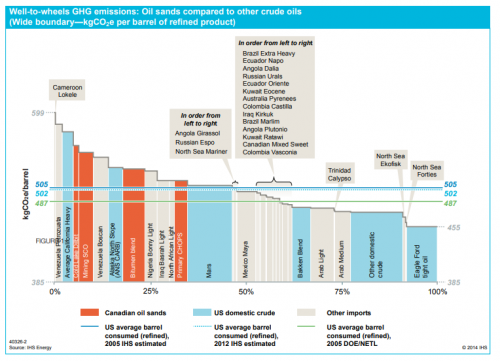 According to the chart from the 2014 IHS report, Comparing GHG Intensity of the Oil Sands and the Average
US Crude Oil, if Alberta producers can lower carbon-intensity to 502 kgCO2/b, they will perform better than 50 per cent of all crude oils and better than all of the heavy crudes.

If Alberta can reach IHS’ standard of 487 kgCO2/b, then it will outperform 60 to 65 per cent of all crude oils.

There are three good reasons to believe many, if not most, Alberta oil sands producers can reach this level.

One, oil sands companies understand the link between taking carbon out of the barrel and lowering operating costs.

Harbir Chhina, VP of technology for oil sands giant Cenovus, told me in an interview last year that the industry and his company are frantically innovating because they believe that new, better technologies can both drive down costs that will enable them to compete with all but the lowest global producers (think Saudi Arabia and the best Permian Basin fields) while dramatically lowering emissions.

The next big push for Cenovus will be low temperature solvents that are effective in a 100 degree Celsius environment.

“If we could make that work, that would drop our steam oil ratio by 75% which is a game-changer,” he said. “Lower temperature solvents is where the focus should be.”

Two, Notley’s government has introduced a suite of policies, regulations, and subsidies to help industry meet its goals.

The carbon levy and output-based allocations system was designed with the big oil sands companies at the table. It is designed to reward producers who reduce emissions below a government-mandated threshold, while penalizing those that do not. The threshold will be move ever lower over time so that producers continually innovate.

Combined with other provincial and federal programs, producers can tap into a robust ecosystem designed to support their drive for ever lower heavy crude oil carbon-intensity.

The commitment by both industry and government is impressive and something for Canadians, but especially Albertans, to be proud of.

Then why in the world would we want to hobble that effort and give up market share to heavy oil jurisdictions that do nothing to lower emissions?

Why let carbon leak from Canada to Latin America or Africa or the Middle East?

Instead, why not use the oil sands ever improving carbon and cost-competitiveness to grow production and take market share from less diligent nations in an increasingly carbon constrained global energy system?

But is the objective to reach arbitrary national goals or improve the chance of reaching the global 2C temperature increase target for this century?

Increasing Alberta oil sands heavy crude output by a factor of two or three or even four times as part of the effort to de-carbonize the existing global energy system is a counter-intuitive strategy.

Shouldn’t we at least consider it?