“This is not energy policy, it is Donald Trump-style, grievance-fueled populism pandering to the frustrations and anger of an industry that thinks it is under siege.”

Jason Kenney, Andrew Scheer, and Scott Moe speechified at the Energy Relaunch conference in Calgary Thursday and if this is the state of conservative thinking about energy issues and policy, Alberta is big trouble.

Before we discuss what the three conservative leaders actually said, let’s consider what they should have said. Or, more accurately, the elephant in the room they didn’t address.

Last week, heavyweight international consulting firm Wood Mackenzie released a thought piece entitled, Thinking global energy transitions: the what, if, how and when. The article is a companion piece to other studies that examined how the energy transition – from fossil fuels to electricity generated by low or no-carbon technologies – will affect super-major oil and gas companies (for instance, that Peak Oil Demand will arrive around 2036).

“The two primary drivers – renewables and electrification – are out of kilter. Renewables growth is well ahead of electrification trends but, in time, the two will converge. This is the ‘point of singularity’, when the world rings out the old and rings in the new,” according to the thought piece.

“We think this point of singularity will happen by 2035, less than 20 years away.”

Alberta is looking at global oil consumption peaking in the mid-2030s to mid-2040s, well within the planning time horizons of oil sands projects, for instance.

And let’s not forget a key point from Wood Mackenzie: during periods of rapid technology change, such as the one we’re in now, technical disruptions can come out of left field and significantly speed up market disruption.

The energy transition is real and it’s heading this way fast, but you wouldn’t know it listening to the speeches and comments from Kenney, Scheer, and Moe.

Kenney, in particular, is just a broken record of bad policy ideas. He set out a fight back strategy whose components he has been talking and tweeting about for some time.

The UCP leader is proposing five tactics that are aimed squarely at the grievances aired in the board room of the Canadian Association of Petroleum Producers and the lounge of the Calgary Petroleum Club:

2) the Alberta government will fund legal challenges against Canadian charities that oppose pipelines and expansion of the oil sands, such as the David Suzuki Foundation;

3) a Premier Kenney would call the CEOs of major Canadian oil and gas firms (read Suncor, Cenovus, CNRL that supported Rachel Notley’s Climate Leadership Plan in 2015) and instruct them to replicate Resolute Forest Products’ lawsuit against Greenpeace in the United States (which was dismissed in 2017);

4) the Alberta government and its agencies will boycott companies – he specifically mentioned HSBC, which did not in fact boycott Alberta energy companies – it thinks are punishing industry; 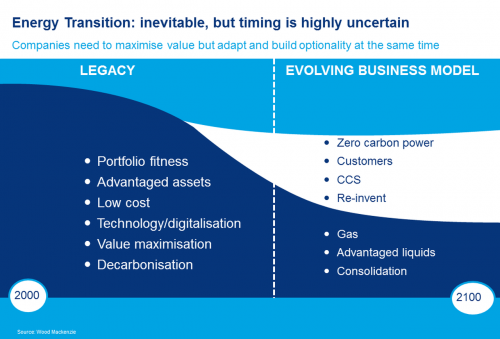 “I am serious about defending the vital strategic interests of Alberta using every tool at our disposal,” Kenney said.

Then, for good measure, he repeated the frequently heard complaint about how Alberta contributes so much to the federal equalization plan but gets no political support from receiving provinces for its pipeline projects. Just for good measure, he once again called out industry executives he claims foolishly embraces activists like the oft pilloried Tzeporah Berman.

This is not energy policy, it is Donald Trump-style, grievance-fueled populism pandering to the frustrations and anger of an industry that thinks it is under siege.

This is vengence, not vision.

In a recent podcast, Chris DeLucia of IHS MarkIt explained the different approaches toward the fast emerging low-carbon economy of the majors (Shell, Exxon, BP and in the Alberta context, oil sands companies)  and the independents (US shale drillers, for instance, and in Canada the junior and midcap producers).

For the independents, “they compete really as pure play oil and gas companies. They don’t really have scope for more direct involvement in the low carbon sector. But for the global integrated oil companies, and with them we’re really talking about the majors here, for those companies it’s really a different story given that they maintain more diversified portfolios beyond just the upstream segment.”

The majors are quickly – well, quickly for corporate giants – tacking to the new reality of the transforming global energy system, while the independents are focused on the nuts and bolts of their business after three years of downturn and the current uncertainty and volatility.

The same dichotomy is playing out in Alberta.

The big oil sands players are integrated (little exposure to the WCS/WTI differential), profitable, and deeply committed to being “cost and carbon-competitive” – the sector’s new mantra.

This is Notley’s sandbox. Oil sands CEOs helped develop her energy policies and they are the biggest beneficiaries.

The juniors and midcap producers are suffering mightily. Many have failed, a large number of those remaining are highly exposed to price differentials and still losing money, and they are barely hanging on.

If Wood Mackenzie is right about the global energy transition barreling down toward the oil and gas sector, Alberta has much bigger threats to worry about than the David Suzuki Foundation.