Prof. Dwight Newman appearing before the Senate on May 8

Contrary to Jason Kenney claims, invoking declaratory powers would be a minor clarification, assertion of federal authority over inter-provincial pipelines

For weeks now, Jason Kenney has been claiming that federal declaratory powers can “over-ride” any BC legal challenges to Trans Mountain Expansion. When Postmedia columnist Paula Simons challenged his claim on Twitter on May 25, he replied, “Before being dismissive, you might want to consult the Senate debates & witness testimony that led to this.” I took him up on that challenge. Turns out the situation is a bit less certain than the United Conservative Party leader claims.

Take this petition posted by the United Conservative Party – circulated on social media by Kenney and still up uncorrected on the UCP website – that says, “Prime Minister Trudeau can stop the BC NDP today. However, he has refused to invoke the ‘declaratory power’ of the Constitution to declare BC’s actions as being against the national interest.” 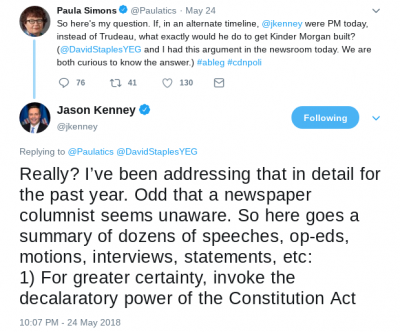 Or this June 6 video posted to Twitter by Kenney. He begins by correctly pointing out that the Canadian government’s purchase of most of Kinder Morgan’s Canadian assets still doesn’t resolve the constitutional uncertainty over the project or provide a clear strategy for getting the pipeline built, but eventually careers spectacularly off the track.

“So, if Justin Trudeau is really serious about it, instead of sending $4.5 billion to Houston, Texas, here’s what he could do,” he said.

“First of all, use his constitutional power to by passing Bill S-245, Senator Doug Black’s that says the Trans Mountain Expansion pipeline is ‘for the common advantage’ or in the national interest, thereby over-riding [emphasis added] BC delay tactics.”

The key word here is “over-riding,” which means to cancel or nullify.

Canada cannot cancel or nullify BC’s reference question to the BC Court of Appeals asking if it has the authority to restrict increases in the shipment of diluted bitumen through the province. Nor can it prevent BC from going back to court with another reference question or legal challenge.

BC has almost no chance to win the current case according to every constitutional expert I’ve interviewed, including Prof. Dwight Newman of the University of Saskatchewan, who addressed the Senate Transportation Committee about S-245 on May 8. 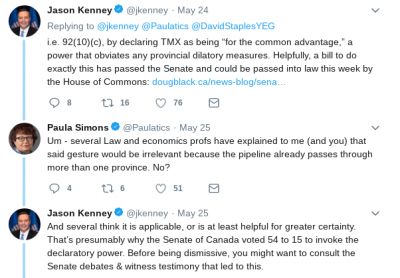 After reading Newman’s testimony, his written brief, and interviewing him, it’s pretty clear that the Trudeau Government can use the declaratory powers, but the benefits are far less than Kenney would have Albertans and Canadians believe.

Invoking Sect. 92.10(c) of the Constitution would do two things.

One, even though Sect. 92.10(a) gives the the federal government exclusive jurisdiction over “inter-provincial works” and decades of case law affirm the application of that section to pipelines that cross a provincial boundary, declaring Trans Mountain Expansion in the national interest would have a “symbolic effect,” according to Newman.

“It makes clear that the federal government is working to implement its jurisdiction,” he wrote in his Senate brief.

Two, just in case justices ruling on future legal challenges think there is some ambiguity on the issue, the message to Canadian courts is, “On the off chance you were wondering, this is our turf and we have every intention of keeping it our turf.”

“That may well count on its own and may help to confirm that federal paramountcy ousts various forms of provincial interference in the project.”

Paramountcy is an important constitutional concept. Basically, it says that if provincial laws clash with federal laws, the federal government always takes precedence.

Paramountcy has already been invoked twice by the National Energy Board (which is a superior court under the NEB Act) on the Trans Mountain Expansion project, once in 2014 and last Dec. BC challenged the latter decision and the Federal Court of Appeals dismissed the application.

Not every constitutional expert agrees that using Canada’s declaratory powers is worth the bother.

“It’s hard to see how that [using the declaratory power] would add anything to what’s already exclusive federal jurisdiction over approving this pipeline,” said Prof. James Coleman of the Dedman School of Law in an earlier interview.

In fairness to Kenney, in a tweet or two he has moderated his position a bit, claiming that at the very least using the declaratory powers would be ” at least helpful for greater certainty.”

But that’s not how the Canadian public – especially Albertans – are reading his comments. I know because I’ve had dozens of Energi News readers asking if he’s right.

Unfortunately, he is not.

The issue is much more complex and nuanced than Kenney claims. Which, I suppose, is what opposition politicians of all stripes always do for their own political benefit.

But it’s the role of the news media to hold those politicians accountable for their fudging of the facts.