Will it never end? Alberta Premier Jason Kenney takes every opportunity, no matter how crass, to shill for increased oil and gas exports. This time it’s the Russian invasion of Ukraine. Setting aside the Premier’s cold-blooded exploitation of a humanitarian crisis, there is one overwhelming reason to resist the push for more development: Alberta’s hydrocarbons are unethical. 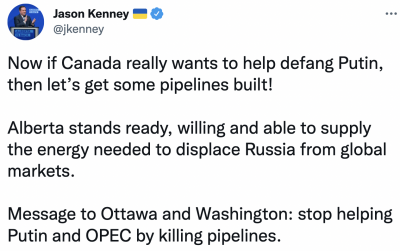 Kenny often parrots the “ethical oil” line made famous by alt-right activist Ezra Levant, arguing that Alberta oil should be preferred over hydrocarbons from “tyrannical dictatorships” like Russia and Saudi Arabia.

The Alberta energy war room even created a bizarre “tyranny index” to bolster this specious argument.

What’s the case for Alberta oil and gas being unethical?

The average emissions-intensity of bitumen is 69 kg of CO2e per barrel, one of the highest of any global crude (Europe’s average is 18 kg and Norway’s is 9 kg). Producers have struggled for years to reduce that intensity, with limited success.

The 37 oil sands tailings ponds contain 1.3 trillion litres of toxic material and some of the ponds are leaking. On paper, Alberta regulations require operators to reclaim the ponds, in practice only $900 million has been taken as surety against an estimated cost of $31 billion. And after decades of research, producers still have not devised a way to economically remediate the ponds.

The methane leakage rate of Alberta natural gas production is almost certainly above three per cent, the threshold for gas to be more climate-positive than coal. Accurate measurement of methane leaks has until recently been difficult, making industry and government data unreliable. The International Energy Agency recently noted that methane leaks are 70 per cent higher than governments are reporting.

Inactive and orphan wells are a serious problem in Alberta. Plenty of responsible operators follow the rules, but some unscrupulous companies do not. And the Alberta Energy Regulator and the provincial government seem reluctant to rein in the bad actors. As a consequence, landowners, municipalities, and taxpayers are saddled with unfair burdens. 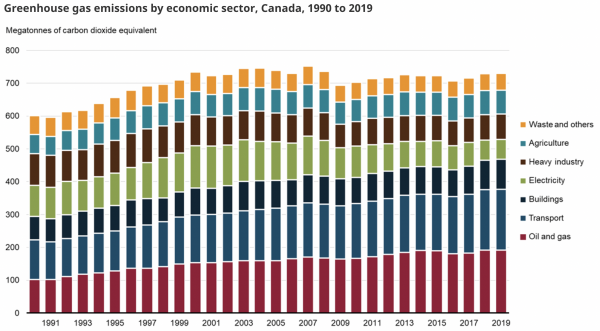 Finally, the oil and gas sector is the biggest contributor (26%) to Canada’s greenhouse gas emissions. The Canadian government expects oil production to grow another 900,000 barrels per day by 2030. Historically, as long as supply increases, emissions have not fallen. The evidence suggests that stricter government emissions regulations for oil and gas production will probably not have much effect for many years.

How can a rational person conclude that Alberta oil and gas is ethical?

Keep in mind that in 2019 I wrote “The New Alberta Advantage: Technology, policy, and the future of the oil sands,” in which I argued that oil sands producers had embraced climate science and policy, thereby earning the right to continue producing as long as there is demand for bitumen.

My argument is no longer valid. With the exception of Suncor, the only company planning to reduce emissions (35%) by 2030, the industry is dragging its feet. To make matters worse, the oil companies are asking Canadian taxpayers to foot $50 billion of the cost to reach net-zero by 2050, at a time when they are earning record profits, which they are giving back to shareholders as fast as possible.

It is an argument for the Premier and the CEOs to finally acknowledge the enormity of the problem and to clean up the mess. Sooner rather than later.

If the Canadian oil and gas sector wants public support for more exports and the infrastructure to get its product to market, then the industry has to earn it. The CEOs could start by replacing the Alberta Premier as their most visible pitchman. Then it can get serious about addressing the reasons why its products are unethical.

Until it does, expanding exports should be off the table. In fact, perhaps the time has come to consider the Canadian oil and gas sector’s greatest fear: a cap on production.