“[W]e are in that crisis position because of the incompetence and chaos and conflict that is constantly being generated by the UCP government.” – Notley

Rachel Notley is mad as hell at Justin Trudeau and Danielle Smith for recent comments about federal energy and climate legislation. She says her rivals are to blame for a deepening political crisis. This is nonsense. There is no crisis. This is a minor tempest in a tiny teapot as Alberta heads into the spring election. But it could be an opportunity for a serious conversation about oil and gas jobs and greenhouse gas emissions. Notley is the only one who can lead it.

Premier Smith has been fulminating about a Liberal plot to kill hydrocarbon extraction, the source of Alberta’s economic bounty and her government’s $12.7 billion budget surplus. Prime Minister Trudeau’s devious plot includes impending legislation, set to be introduced this year, for a Just Transition program and an oil and gas emissions cap. Compliant Alberta media are expected to amplify Smith’s outrage, but more is expected of Notley than yesterday’s feigned indignation.

“We are in what I would describe as a crisis right now, in that we have a federal government about to move forward on legislation that has wide-ranging consequences, particularly to the people of Alberta,” Notley told Don Braid of the Calgary Herald. “My view is that the federal government has to put the brakes completely on its legislative plans for this spring with respect to the sustainable jobs legislation, as well as plans for the emissions cap,” she added.

That’s not going to happen. Nor should it. As I explained last week, Smith is “rage-farming” to deflect attention from what may be the most awful three months any premier has had since 1867. Her polling numbers are in the tank. Twitter wags joke that the busiest member of her cabinet is the Associate Minister of Walking Back the Premier’s Statements. If rumours are to be believed, a whisper campaign is afoot to remove her from the UCP leadership. And she’s only been leader, and premier, three months.

Her government is a disaster of epic proportions. How epic, you ask? Her predecessor, Jason Kenney, was widely thought to be the worst premier in Alberta history, but he is now spoken of as a respected elder statesmen compared to Smith.

In reality, Smith is just taking Kenney’s “fight back” strategy of blaming every sparrow that falls on Trudeau to its logical limit. Striving for that limit has plunged Alberta into utter chaos, mind, but that’s the price 4.5 million Albertans must pay for the possibility of a UCP re-election.

To be fair, Trudeau has the luxury of watching, bemused, from 3,453 kilometres away, while Notley does not. She’s running a classic frontrunner’s campaign – keeping her helmet below the trench, not saying or proposing anything that might draw fire, and blaming every sparrow that falls on Smith. Sometimes, the UCP strategy of tying her to the Liberals and their minority government partner, Jagmeet Singh and the NDP, in the dreaded “Notley-Trudeau-Singh alliance,” requires her to unload the big guns on the Prime Minister, too.

Fear not, there are no bruised egos in the PMO today. This is the Alberta election silly season. Liberal mandarins know full well that when the moderate Notley was premier from 2015 to 2019, she cut deals with Trudeau all the time. Had she not, the Trans Mountain Expansion pipeline would be one more industry grudge against Trudeau instead of a $22 billion mega-project slated to begin delivering Alberta crude oil to the West Coast in 2024.

What Albertans should worry about is that the political bluster from Notley and Smith prevents a serous conversation about important oil and gas issues that is long overdue.

In his column, Braid claims that the federal oil and gas emissions cap is “widely considered a de facto order to reduce production.” He links to a Herald story in which Smith claims two billion barrels per day of production would be shut in. Economist Andrew Leach, who actually knows a thing or two about the oil industry, says that amount is “improbable.”

But the Canadian Association of Petroleum Producers commissioned modelling from consulting firm Navius that shows 600,000 barrels per day might become uneconomic. Navius is well respected and their analysis should be taken seriously.

But neither the news story nor Braid mention that Pembina Institute modelling shows that the industry can meet 2030 emissions. The Pembina model requires oil companies to increase their ambition, to not to do just that which is the least cost and most convenient.

While we’re here, let’s consider an idea that is presently verboten in Alberta: that if CEOs can’t elevate their urgency, perhaps some oil sands production should stop.

The most recent S&P Global study pegged the average oil sands emissions-intensity at 68 kg CO2e per barrel, which is already among the highest in the world. Some facilities, however, were more than double at just under 140 kg CO2e per barrel. Some of that production is at older projects whose capital costs are long since paid off, making them low cost and very profitable. Some uses the CSS (cyclic steam stimulation) extraction process, which has a high steam to oil ratio.

The emissions-intensity of CSS production has actually risen by 15 per cent over the past decade. CRNL, Canada’s largest oil producer, has been substituting solvent for steam in the Primrose field in northeast Alberta. Early reports show a 40 to 45 per cent reduction in emissions. Other companies, like Cenovus, have also been slowly adopting this technology for years.

Perhaps an emissions cap would light a fire under cautious, risk-averse CEOs? 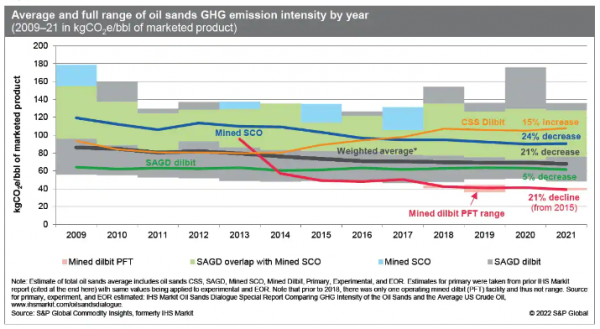 At the very least someone has to tell the oil sands CEOs that the status quo is unacceptable. That climate change is a crisis and emissions can’t be gently lowered over decades because that’s best for their profits and outrageously high shareholder returns. The CEOs want to decarbonize the oil sands on their own time table, at the lowest costs, and they want taxpayers to pick up most of the bill.

Smith is their chief cheerleader, don’t expect her to change dance routines mid-game.

The only Alberta politician with the chops and the backbone to deliver the message that oil and gas emissions reduction is an urgent priority is Rachel Notley. While premier, in 2015 she introduced the Climate Leadership Plan. Her industrial emitters carbon tax (CCIR) is the basis for the UCP’s TIER. She has consistently supported the industry, its workers, and lower emissions ever since.

Unfortunately, instead of substantive contributions from the NDP leader, Alberta gets yesterday’s remarks.

Where Does Alberta Go From Here?

The outrage over Just Transition legislation is too silly to engage with. Some serious people object to the name. Fine, call it something else. “Oil and gas worker adjustment programs,” perhaps. But the Alberta industry has lost 40,000 jobs since 2014 and, if a 2020 EY study is accurate, will lose another 40,000 to 50,000 by 2040 due to new digital technologies like artificial intelligence. Will governments withhold help for those workers because of a nonsensical political squabble? If they do, they should be sacked by voters at the earliest opportunity.

The real battle, at least in the short-term, is over emissions.

I can hear readers muttering, “but she has to get elected first!” And Kim Campbell’s maxim about elections not being the place to discuss issues comes to mind. In Alberta, however, there always seems to be some reason why the oil and gas sector’s future, especially emissions cuts, should not be talked about. Unfortunately, the time for prevarication is over, if for no other reason than that Trudeau and the federal government are insisting that Alberta finally address the issue.

If Notley refuses to lead the conversation, who’s left?