Senior executives from Canadian oil and gas companies gathered for a press conference Thursday to express their displeasure with the Trudeau government’s handling of Bill C69 amendments. The united front supports the widespread criticism of the new environmental assessment legislation, but the critics need to answer a few questions, as well.

Imperial Oil CEO Rich Kruger rejected the claim that Senate amendments were industry-friendly. “These amendments were adopted following nationwide input and extensive consultation, thoughtful negotiation and compromise on the part of industry,” he said  “This bill, in its current form, is unworkable from a major investor perspective, and continues to perpetuate a climate of regulatory risk and uncertainty.”

“The Senate amendments were a reflection of a diligent and robust effort to gather feedback from all Canadians and the Senate put forward a Bill that was balanced, workable and had broad support,” Suncor CEO Mark Little said in a press release. “Had these critical amendments been included, it would have done a lot to restore investor confidence.”

By independent senator Paula Simons’ count, the government accepted 62 amendments as written, accepted another 37 with minor changes, and rejected 81. Media reports have Bill C69 opponents inaccurately claiming the discarded changes were all from Conservative senators, leading charges of partisanship from Liberal opponents.

If the so-called “critical amendments” weren’t rejected for partisan political reasons, why did Environment Minister Catherine McKenna toss them in the round filing cabinet?

According to Simons, some of them were passed with the senators knowing full well the government would discard them. Passing legislation requires compromise, after all.

“We made a compromise in order to get the bill out of committee. We each accepted some amendments that we didn’t agree with,” she said. “But that’s bargaining, right?”

So, it appears some amendments were deep-sixed because they were obvious stinkers. For examples of said stinkers, I turned to Professor Martin Olszynski, who teaches environmental law at the University of Calgary.

The best example, one that appears to have been put forward by the oil industry, is the “privative clause,” which would make it more difficult for project opponents, including First Nations, to launch legal challenges, says Olszynski.

“We are very concerned that this amendment would undermine access to justice and the rule of law, by impeding the ability of citizens and Indigenous Peoples to seek judicial review of assessments of major projects – ones that could significantly affect our health and environment,” 50 law professors wrote in a June 11 letter to McKenna on June 11. “As Law Professors from across Canada, we urge that this amendment be rejected.”

Restrictions included in the privative clause include requiring applicants to seek leave from the Federal Court of Appeal in order to proceed with a judicial review, mandating that decisions under the environmental assessment process are “final and binding,” denying applicants oral hearings, and requiring a hearing to be held within 60 days, which is “unworkable given the heavy caseload of the courts.”

Olszynski said in an interview that his research shows less than 7 per cent of projects subject to federal review are challenged.

“You can understand why if you’re dealing with TMX or Northern Gateway that you want to restrict litigation. Of course, it wouldn’t restrict the litigation that matters, which is indigenous peoples,” he said, noting that rights to aboriginal consultation, for instance, are protected in the Constitution Act of 1982. “You can’t find a way around that.”

Another amendment tries to reverse the constitutional doctrine of federal paramountcy, whereby federal laws are paramount in the event of a conflict with provincial laws. This is particularly ironic because the National Energy Board cited paramountcy when ruling for Trans Mountain Expansion in disputes with the City of Burnaby in 2017.

“The is particularly egregious,” says Olszynski. “Perhaps there are grounds for a discussion about the balance of power over resource development, but it’s not the kind of thing you drop into a statute at the 11th hour — especially not by an unelected Senate and with hardly any debate.”

Another amendment appears to give the provinces a veto over the federal environmental assessments. In fact, Alberta Premier Jason Kenney signed a June 10 joint letter with five other premiers arguing that “Bill C69 upsets the balance struck by the constitutional division of powers by ignoring the exclusive provincial powers over projects
relating to these resources.” 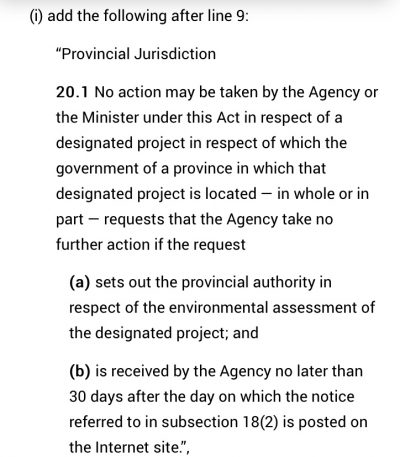 “For the oil and gas industry and conservative politicians, ‘shared jurisdiction’ seems to me ‘exclusive provincial jurisdiction’ and that’s just not right,” he said.

Both Simons and Olszynski provided other examples of problem amendments that failed to find their way into the version of C69 that will soon be debated in the House. A reasonable conclusion is that some, if not most of them, deserved to be rejected because they are unconstitutional or unworkable.

If that is the case, then why are the oil and gas executives demanding that clearly inadequate amendments be accepted?

Why is Jeff Tonken, CAPP chair and CEO of Birchcliff Energy, politicizing those demands by claiming that “the federal government is positioning itself to let the energy industry die so that they can get votes to get re-elected”? The allegation is really quite outrageous, coming as it does from the board of the industry’s biggest lobby group, and undermines what might otherwise be legitimate criticisms.

Natural resource development requires a tremendous amount of capital, Canada is too small to generate that capital internally, therefore we have to look outside our borders to finance the oil and gas development, pipelines, mines, forestry, and infrastructure that supports the core of our national economy. Most Canadians can support industry’s argument that Canada needs to restore investor confidence in our country’s regulatory regime.

But what is Canada being asked to give up to provide that assurance? Too much, judging by the constitutional concessions required of those rejected C69 amendments.