Yesterday I wrote about MIT’s climate change plan that engages fossil fuel companies to find science and technology solutions. Today the subject is Bill Gates and his plan to invest billions of his own money in clean energy research.

The common theme here is people and institutions investing in real-life stuff that works better – or will work better one day – than our current technology. The lifeblood of Western economies is innovation and better technology. We cannot go wrong developing new technology that allows us to use energy more efficiently.

As I pointed out yesterday, MIT’s approach is the opposite of the negative protest-oriented model of environmentalists like Bill McKibben et. al. Sure, they put climate change and energy on the global political agenda. But that job is done. Now is the time for solutions.

Which means it is time for innovators like Bill Gates to take centre stage.

Everyone knows that since leaving Microsoft nearly a decade ago Gates has dedicated himself to investing 95 per cent of his immense fortune (estimated to be almost $80 billion USD) in solving global problems through the Bill & Melinda Gates Foundation. He gets plenty of attention for investing in financial services for the poor or better hygiene in developing countries. 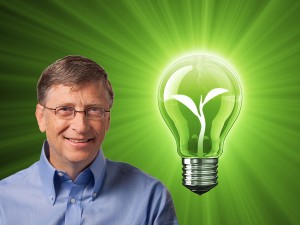 Bill Gates is less well known for investments in clean – or cleaner – energy.

This summer he wrote a manifesto of sorts about his intention to spend several billions of his own money (his Foundation doesn’t invest in energy) on clean energy research, such as new batteries and other storage methods, advances in solar technology, and nuclear design that “would be safer than previous designs and would go a long way toward solving the nuclear waste problem.”

He plans to spend his money in three basic areas:

“In my view, innovation is essential to human progress,” he concludes. “Some people would say that it is the lens I use to look at every problem, and I have to admit that there is some truth to that. But I believe it is justified by history.”

Innovation is, indeed, the answer to climate change. America needs to listen far more to Bill Gates than it currently does to Bill McKibben.