Where have the moderate, pragmatic oil and gas industry centrists gone? You remember this now endangered species: reasoned language in public and on social media, willing to compromise and find common ground with opponents, plugged into global trends like the energy transition and climate change. Unless Alberta-based leaders find their way back to the middle, there is little hope of solving the myriad of challenges confronting the industry.

Let’s recall that fateful day in Alberta energy history – Nov. 22 2015, launch of the Climate Leadership Plan – the last time the hydrocarbon industry staked out a moderate position on energy and climate policy. Onstage with Premier Rachel Notley were four executives of the largest oil and gas companies in Canada: Murray Edwards of CNRL, Steve Williams of Suncor, Lorraine Mitchelmore of Shell Canada, and Brian Ferguson of Cenovus. 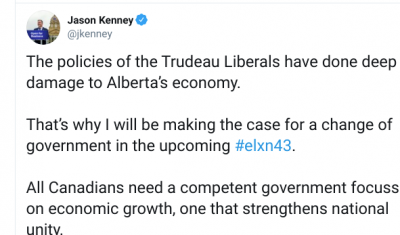 They were there because they and a few others from industry had been meeting with five environmental groups for the past year to hammer out a deal on climate policy, which Notley then enshrined in her Plan. Dave Collyer, former CEO of the Canadian Association of Petroleum Producers, and Tzeporah Berman, now reviled in Alberta, moderated the meetings.

The companies agreed to support province-wide and large emitter carbon pricing, a 100 megatonnes per year oil sands emissions cap, and a 45 per cent reduction in methane emissions. What did they receive in turn? The promise of no cap on production, despite misgivings by the environmentalists that absolute emissions would continue to rise because of the rapid growth of bitumen output.

The NDP premier then used the Climate Leadership Plan to cut a deal with Prime Minister Justin Trudeau a few weeks before the Canadian government headed to the Paris Climate Conference. Alberta received approval in 2016 for two pipelines – the 525,000 barrels per day (b/d) Trans Mountain Expansion Project to the West Coast and the 360,000 b/d Line 3 replacement. When American President Donald Trump put the cancelled Keystone XL project back on the table in early 2017, Trudeau let the Canadian approval stand.

Without that deal, Canada would have landed in Paris with no substantive climate policy to brag about.

The old-fashioned horsetrading ensured that everyone got something even if they didn’t get everything on their wishlist. A win-win-win scenario.

How was news of the deal between the CEOs and ENGOs received? Industry-friendly former Postmedia reporter Claudia Cattaneo nicely summed up the view of Climate Leadership Plan opponents: “…the CEOs made a bad deal to mitigate damage from a hostile provincial government that has undermined their industry’s attractiveness and caused deep divisions between those who were at the table and those who weren’t.”

A word about those who weren’t at the table.

By late November of 2015, global oil prices had collapsed from highs over $100 per barrel, hitting a low of $13.81USD for West Canada Select during February of the following year. Everyone in the industry suffered, but the junior producers (less than 10,000 barrels of production) suffered most. For these CEOs, climate policy added more compliance costs at a time they were already drowning in red ink.

Layered on this legitimate business concern is a deep vein of climate denial. Abacus Data polling over the past five years consistently shows Alberta has by far the biggest proportion of climate laggards. Some hydrocarbon executives, like Peyto Exploration CEO Darren Gee, proudly trumpeted their Friends of Science – which not coincidentally is headquartered in Calgary – inspired pseudoscience explanations.

The boardrooms of Calgary were fertile ground for a policy rebellion.

Several of the industry representatives at the table have told Energi Media they went out of their way to minimize hard feelings. Unfortunately, the bad blood persisted and turned into a two-year pitched battle that the big companies eventually lost. CEOs of the participating companies retired and their replacements weren’t as moderate or as keen to compromise.

Then, the industry backed Jason Kenney, who has made partisan pugnaciousness his calling card.

In previous columns, I have argued that the Alberta Premier takes a page out of Donald Trump’s playbook, using populist techniques to enrage voters.  Communications professor Patrick McCurdy of the University of Ottawa, who studies the use of language in the Canadian energy sector, says that the rise of social media has influenced political language.

“Social media logic is meant to get people angry, not to encourage rational discourse,” he told Energi Media, noting that Kenney is an avid tweeter. “There’s a place for passion in public debates, but social media facilitates ad hominem attacks, especially partisan ones.”

This describes Kenney perfectly. Just two years ago, he told a Postmedia opinion columnist that Trudeau is an “empty trust-fund millionaire who has the political depth of a finger bowl.” He eventually recanted – after refusing to do so for a week – and while his attacks are less personal, they are frequently as vitriolic.

Here we are, five years on from the Climate Leadership Plan announcement, with much of the industry in trouble, many serious issues that need resolution, and the bridges built in 2015 have been torched with a flamethrower.

Worse yet, there is little appetite for compromise with a prime minister and his energy and climate ministers who are considered weak at best, traitorous at worst.

Somehow, as quickly as possible, pragmatism, moderation, and compromise must replace populist acrimony. Concern for the greater good must trump (pun intended) narrow partisan gain. If not, then Canada will increasingly be seen as a risky place for investors.

The moderates within the Alberta oil patch will do their country a great service if they step to the fore as they did not that long ago.