This article was published by the International Energy Agency on Oct. 19 2022.

Despite concerns about the effects of the current energy crisis, global carbon dioxide (CO2) emissions from fossil fuel combustion are expected to grow by just under 1 per cent this year, only a small fraction of their increase last year, as a strong expansion of renewables and electric vehicles prevents a much sharper rise.

New IEA analysis of the latest data from around the world shows that these CO2 emissions are on course to increase by close to 300 million tonnes in 2022 to 33.8 billion tonnes – a far smaller rise than their jump of nearly 2 billion tonnes in 2021, which resulted from the rapid global recovery from the economic crisis triggered by the pandemic. This year’s increase is driven by power generation and by the aviation sector, as air travel rebounds from pandemic lows.

The rise in global CO2 emissions this year would be much larger – more than tripling to reach close to 1 billion tonnes – were it not for the major deployments of renewable energy technologies and electric vehicles (EVs) around the world. Even though the energy crisis sparked by Russia’s invasion of Ukraine has propped up global coal demand in 2022 by making natural gas far more expensive, the relatively small increase in coal emissions has been considerably outweighed by the expansion of renewables. Global energy trends have also been affected this year by the impacts of Russia’s war on the world economy, which have significantly dampened expectations for economic growth, notably in Europe.

The combined result is that the CO2 intensity of the world’s energy supply is set to improve slightly in 2022, resuming a years-long trend of consistent improvement that was disrupted last year by the emissions-intensive economic recovery from the Covid crisis. This year’s expected improvement contrasts with what happened following the 2008 global financial crisis, which saw strong deteriorations in the CO2 intensity of energy supply for several years after the initial economic shock.

“The global energy crisis triggered by Russia’s invasion of Ukraine has prompted a scramble by many countries to use other energy sources to replace the natural gas supplies that Russia has withheld from the market. The encouraging news is that solar and wind are filling much of the gap, with the uptick in coal appearing to be relatively small and temporary,” said IEA Executive Director Fatih Birol. “This means that CO2 emissions are growing far less quickly this year than some people feared – and that policy actions by governments are driving real structural changes in the energy economy. Those changes are set to accelerate thanks to the major clean energy policy plans that have advanced around the world in recent months.”

Solar PV and wind are leading an increase in global renewable electricity generation in 2022 of more than 700 terawatt-hours (TWh), the largest annual rise on record. Without this increase, global CO2 emissions would be more than 600 million tonnes higher this year. The rapid deployment of solar and wind is on course to account for two-thirds of the growth in renewable power generation. Despite the challenging situation that hydropower has faced in several regions due to droughts this year, global hydropower output is up year-on-year, contributing over one-fifth of the expected growth in renewable power.

While electricity generation from both wind and solar PV is growing far more than any other source in 2022, coal is expected to post the next largest increase as some countries revert to coal use in response to soaring natural gas prices. In total, global CO2 emissions from coal-fired power generation are set to grow by more than 200 million tonnes, or 2 per cent, this year, led by increases in Asia.

The European Union’s CO2 emissions are on course to decline this year despite an increase in coal emissions. The rise in European coal use is expected to be temporary, with a strong pipeline of new renewable projects forecast to add around 50 gigawatts of capacity in 2023. These additions would generate more electricity than the expected increase in coal-fired power generation in the EU in 2022. In China, CO2 emissions are set to remain broadly flat this year, reflecting the mixture of different forces at work, including weaker economic growth, the impacts of drought on hydropower, and major deployments of solar and wind.

As well as the challenges for hydropower in some regions, the world’s low-emissions electricity supply has suffered a setback from a series of nuclear power plant outages, which are set to reduce global nuclear power production by over 80 TWh. This has largely been due to more than half of France’s fleet of nuclear reactors being offline for part of the year. The drop in nuclear power generation globally has contributed to an increased use of coal and oil for electricity generation. The world’s use of natural gas is expected to decline following Russia’s invasion of Ukraine, resulting in a decrease in CO2 emissions of around 40 million tonnes in 2022.

Demand for oil is set to grow more than for any other fossil fuel in 2022, with oil-related CO2 emissions up by around 180 million tonnes. This has been driven largely by the transport sector as travel restrictions have been lifted and pre-pandemic commuting and travel patterns have resumed. Aviation is expected to contribute around three-quarters of the rise in emissions from oil use, notably due to increases in international air travel. However, the aviation sector’s emissions are still only around 80 per cent of their pre-pandemic levels.

Uncertainty in global natural gas markets will continue to shape many key energy trends for the rest of this year and in 2023. However, promising signs of lasting structural changes to the CO2 intensity of global energy are evident in 2022 – and they are set to be reinforced by major increases in government support for clean energy investment, notably in the US Inflation Reduction Act, as well as in decarbonization plans such as the European Union’s Fit for 55 package and Japan’s Green Transformation (GX) plan, and in ambitious clean energy targets in China and India.

The effects of recent policies on energy security and global emissions trends will be explored in depth by the IEA’s World Energy Outlook 2022, which will be released on 27 October. 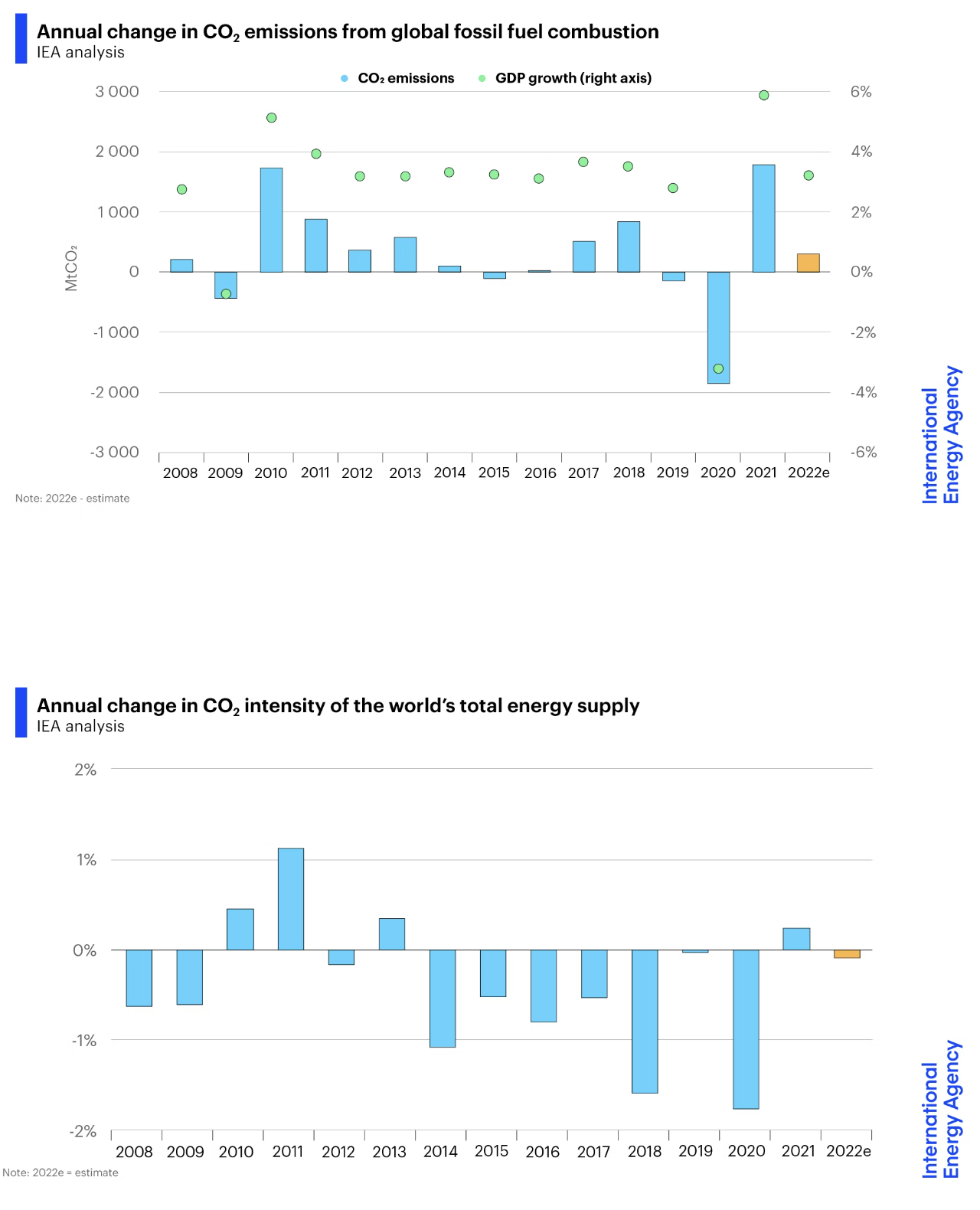 This release is based on real-time energy data for 2022 to date to provide an estimate of full-year CO2 emissions from fossil fuel combustion. Data was gathered from numerous sources available as of 18 October 2022. These include the latest monthly IEA country data submissions; other statistical releases from national administrations around the world; and recent market data from upcoming IEA Market Report publications that cover coal, oil, natural gas, renewables and electricity. The data discussed above do not include CO2 emissions from non-renewable waste, industrial processes, and flaring. Economic growth assumptions are based on Oxford Economics (2022) and IMF (2022).