This article was published by Pembina Institute on April 6, 2021

Canada’s climate targets demand deep decarbonization across the Canadian economy, necessitating improved, transparent and consistent assessment of the carbon performance of the oil sands. Our Oilsands in a carbon constrained Canada report, published in February 2020, outlined the need for improved understanding of the oil sands carbon challenge.

A 2020 report on life cycle emissions assessment in Alberta’s oil sands, published in the Journal of Cleaner Production, increases understanding of the GHG emissions associated with three Canadian oil sands crudes. This is important and valuable work that also demonstrates how collaborative approaches can produce more credible results. It also highlights the difficulty in comparing results of various studies and the need to carefully consider the boundaries and assumptions made.

This study analyzes the GHG emissions intensity of three specific oil sands projects (MEG’s Christina Lake SAGD, CNRL’s Horizon mine, and Imperial’s Kearl mine). Given the variability across oil sands operations in terms of resource quality and technology type, as well as the unique approach taken in this report, we cannot extrapolate these results to show how Canada’s oil sands sector stacks up against other sources of crude oil. But if Canada’s oil sands emissions are indeed 14 to 35 per cent below those reported in the Stanford University Masnadi study, and if emissions in other oil-producing jurisdictions remained the same even after applying the more rigorous methodology detailed in this study, Canada would still remain in the top third in terms of carbon intensity, and above the global average. 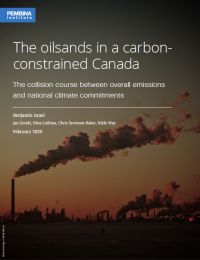 As Canada takes steps toward achieving net-zero emissions between now and 2050, oil demand will decline. Oil producers will be operating in a shrinking market, where cost and carbon intensity will directly influence an operator’s ability to maintain market share. The emerging technologies analyzed in this study show some promise (1.4 to 1.9 per cent emissions reductions over the product cycle from extraction to the combustion of the gasoline in your vehicle, or 14 to 19 per cent reduction solely in upstream emissions). But the reality is that Canada must be in the bottom third of global carbon intensity to compete.

The rest of the world is not standing still, and significant investments, stable and predictable carbon policies, and some tough decisions are necessary to maintain Canada’s competitiveness in the global oil market.