This article was published by Clean Energy Canada on Nov. 7, 2019.

Most voters want climate policies that go beyond what was achieved in the last Parliament, according to a massive national survey conducted by Pollara Strategic Insights on behalf of Clean Energy Canada.

Merran Smith, Executive Director, Clean Energy Canada said “Canadians have sent a clear message: anyone who wants to be prime minister must provide a meaningful plan to address climate change.”  She added “Climate ambition is not only the right thing to do—going forward, it will also be a prerequisite for any party seeking power.”

Given the increased prominence of climate change during this federal election, a large-scale survey of more than 5,000 voters was conducted to collect data about how the issue affected voters’ choices and what they expect from the new minority government.

During the campaign, the Liberals promised to introduce a number of new climate change measures, including legally binding targets that get Canada to net-zero carbon emissions by 2050. 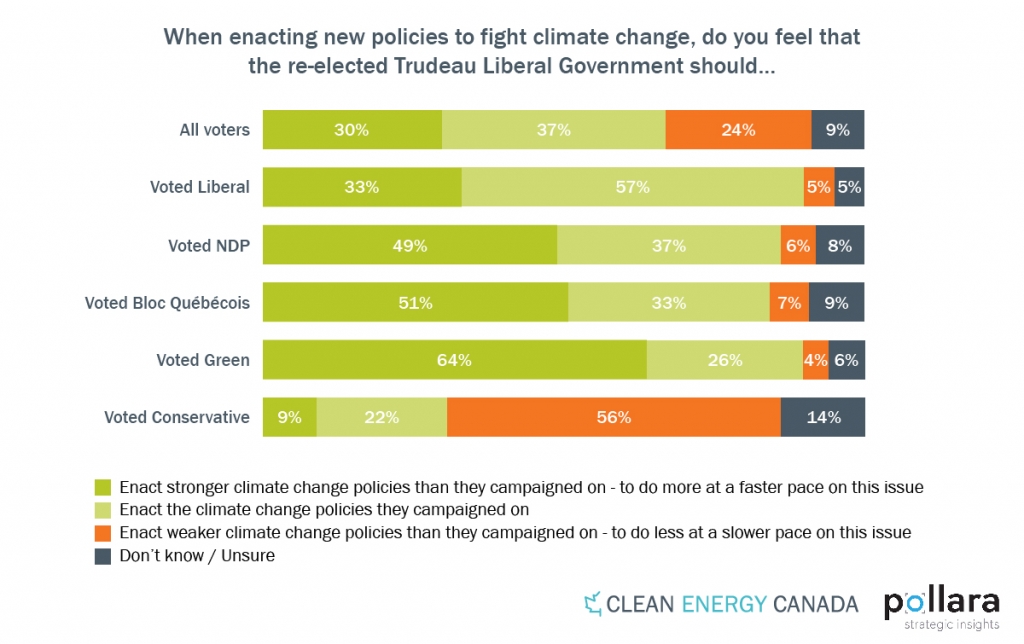 The desire for stronger action is popular across party lines. Even one-third (33 per cent) of Liberal voters want stronger climate policies than what was in the party’s platform, and majorities of Bloc (51 per cent), Green (64 per cent) or NDP (49 per cent) voters share this sentiment.

“This election produced a minority Parliament, but it’s a majority when it comes to the issue of climate change,” said Craig Worden, President, Pollara Strategic Insights.  “Canadians who voted Liberal, New Democrat, Bloc and Green want to see the government put a high priority on taking strong action to fight climate change in the current term.”

The Conservative climate plan failed to connect with most voters

In June, Conservative Leader Andrew Scheer unveiled his party’s climate change and environment platform. It received significant media coverage and commentary, and 69 per cent of voters report being somewhat or very familiar with his plan. 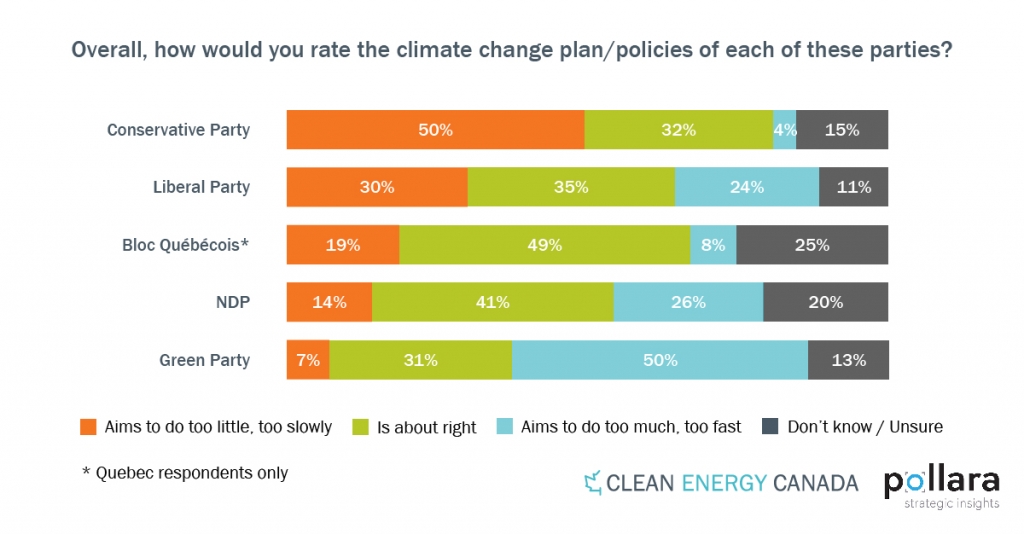 It also had the most negative and sharply divided evaluations of all the major parties’ climate plans: half (50 per cent) of voters said the plan aimed “to do too little, too slowly.” Among Conservative voters, 69 per cent thought the party’s climate plan was “about right.” However, it was seen as doing too little by large majorities of Liberal (73 per cent), NDP (74 per cent), Green (78 per cent) and Bloc (63 per cent) voters.

Securing support in a minority Parliament

The survey asked voters if they supported or opposed the Liberal government adopting certain policies in return for other parties supporting and voting with them in a minority Parliament. 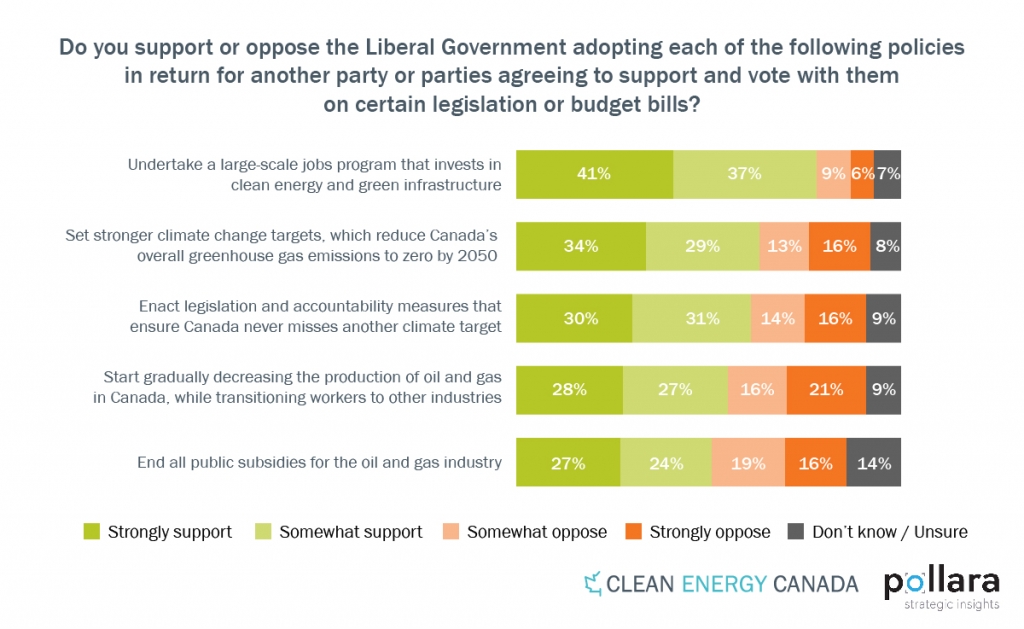 There is majority support nationally for five different proposals that have been discussed publicly by the NDP, the Green Party and the Bloc Québécois. The most popular proposal was “undertaking a large-scale jobs program that invests in clean energy and green infrastructure,” which is supported by 78 per cent of voters, with only 15 per cent opposed.

Support for all of these policies is higher among Liberal, NDP, Green and BQ voters. A majority of voters in Alberta and Saskatchewan supported the jobs program, but were opposed to the other proposals.

The survey asked voters to rate 41 different issues—ranging from health care and the economy to SNC-Lavalin and abortion rights—in terms of the influence each had on their ballot decision.

Each issue was rated on a 10-point scale, where 10 represented a major influence and 0 represented no influence at all. A majority (52 per cent) of Canadians indicated that climate change had an important influence on their decision by assigning it a rating of 7 to 10, ranking it 8th overall.

The data shows that climate change was particularly important for the voters who didn’t choose Andrew Scheer’s Conservative Party. It was one of the five most important issues identified by Liberal (66 per cent), NDP (68 per cent), Green (82 per cent) and Bloc (62 per cent) voters.

Climate was the only top-five issue common to voters for all of those parties, but it was not influential for many Conservative voters (25 per cent).

On behalf of Clean Energy Canada, Pollara Strategic Insights conducted an online survey among a randomly-selected, reliable sample of 5,002 adult Canadians who reported voting in the 2019 federal election. The survey of voters was conducted from October 23- 25, 2019. A margin of error cannot be applied to online samples. A probability sample of this size would carry a margin of error of +1.4%, 19 times out of 20. Quotas and statistical weighting were applied to ensure the sample accurately represents the actual voting electorate in the 2019 federal election, based upon Elections Canada statistics, in terms of the provincial distribution of voters and the provincial and national distribution of political party support.