Part of the drop-off in renewable energy investment was due to falling costs that made renewable sources like solar PV more affordable than ever, the investment decline still represents a warning to clean energy proponents.  Equinor photo by Ole Jørgen Bratland.

This article was published by the International Energy Agency on July 24, 2018.

Global investment in renewable energy declined by 7 per cent in 2017, its largest fall in over 15 years, as reported in the IEA’s World Energy Investment report.

Although part of the drop-off was due to falling costs that made renewable sources like solar PV more affordable than ever, the investment decline still represents a warning.

Renewables are an essential component of a sustainable energy future, and they will have to grow quickly to meet the world’s climate change, clear air and energy access goals.

As projected in the IEA Sustainable Development Scenario, new renewables generation needs to rise rapidly and global investment in renewable electricity needs to almost double to meet these goals, to nearly US$550 billion per year by 2030.

At first glance, 2017 was a very good year for renewables, which accounted for a record two-thirds of power generation investment.

Global renewable power capacity additions rose to a new high, supported by a more than 25 per cent expansion in solar PV installations and record growth in offshore wind. Output from the total installed base of renewable power, influenced by annual resource availability as well as new development, rose by 6 per cent. 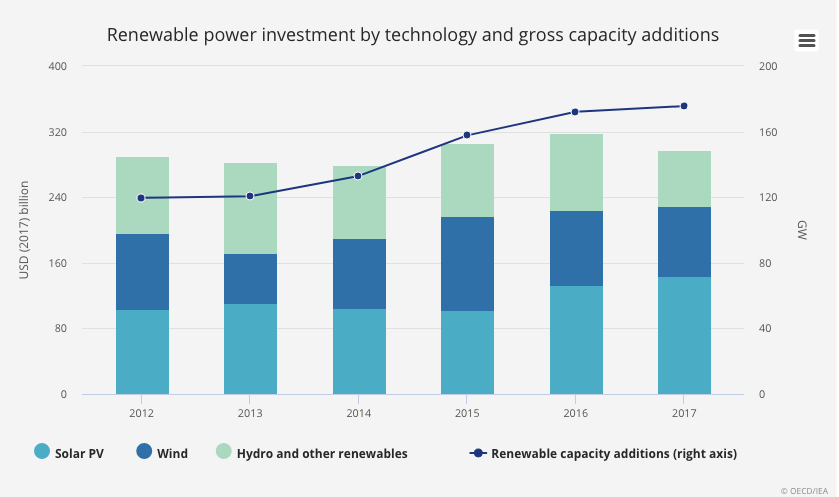 Capital costs continued to fall, by nearly 15 per cent for solar PV and by 5 per cent for onshore wind, indicating that we are indeed buying more for less. While better pricing for key technologies, such as PV modules, supported these economies, there was also a shift in deployment towards regions with lower installation costs.

These factors have supported generation-cost reductions – and in emerging economies, increased scale – for projects awarded in renewable auctions. Cheaper debt and bigger turbines have helped lower generation costs for offshore wind in Europe.

The perceived maturity of renewables and better risk management is also facilitating more off-balance sheet financing structures, from a diversity of financial sources, beyond the United States and Europe. These trends are creating more opportunities globally.

But data for 2017 also reveal warning signs for trends in capacity, new generation and future investment, in part due to a concentration of deployment in markets with policy uncertainty, such as China.

The reason for the decline was the commissioning of fewer onshore wind and hydropower plants which, compared with solar PV, produce more energy per unit of capacity.

As a result, the new annual electricity generation expected from the renewable investments of 2017 points to a decline of 7 per cent compared with the investments of the prior year, in contrast to the modest growth in capacity additions. 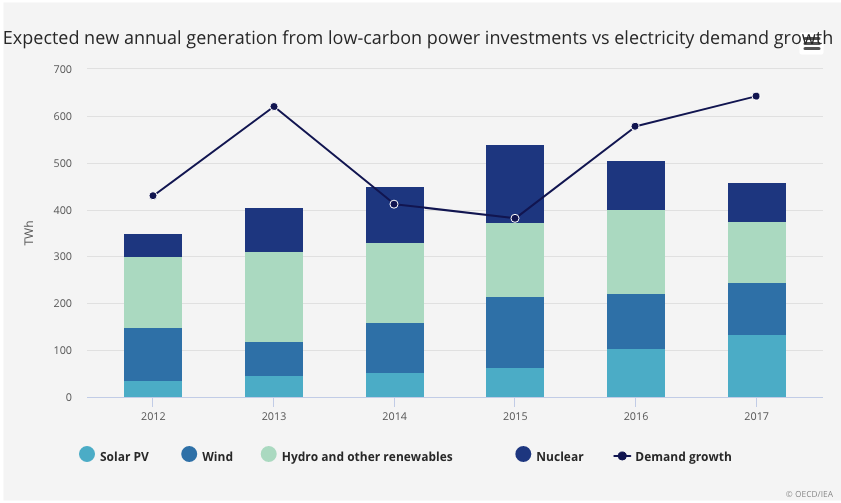 Robust investment in renewable power is even more important for boosting low-carbon power generation in light of a sharp fall in investment in new nuclear power. In some regions, retirements of existing nuclear plants are reducing the impact of new renewables.

Putting all low-carbon power generation investments together, their expected new annual output fell by 10 per cent in 2017, the second straight year of decline, and did not keep pace with demand growth.

This spells a worrying trend for power sector-related CO2 emissions, which grew by 3 per cent in 2017, on the back of a rise in China and India, where renewables deployment was large, but coal power filled the supply-demand gap.

These warning signs underscore the importance of more targeted and stable government policy efforts to facilitate investment, across a portfolio of technologies, in line with sustainability goals, and with capital from a diverse set of industry and financial actors, including public financial institutions.

Governments also need to ensure the value of these investments, through greater system flexibility, and manage the impact on consumers.

Encouragingly, more spending is now going into electricity networks, smart grids and battery storage, which is contributing to a more flexible power system – crucial to the integration of higher shares of solar PV and wind.

Finally, stronger support is needed for investment in electrification of transport and heating, powered by clean sources and the direct use of renewables in these sectors.