Alberta Premier Jason Kenney has accused Tides Canada of receiving money from US foundations and using it to fund anti-pipeline activism directed at projects like Trans Mountain Expansion. In a stunning revelation, CEO Joanna Kerry confirmed to Energi Media that neither the Premier or his office, nor the $2.5 million Public Inquiry into Anti-Alberta Energy Campaigns, has ever contacted Tides Canada to verify the allegations. The Premier repeated the unsubstantiated information again in a Tuesday tweet. 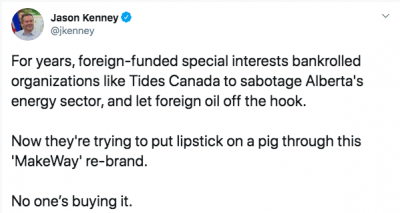 Vancouver-based researcher Vivian Krause has made the allegations many times in her conspiracy narrative blog, Rethink Campaigns. In this exclusive interview, Kerr also confirmed that Krause never contacted Tides Canada to confirm how its grants were actually spent by environmental groups, First Nations, and community organizations.

Tides Canada says she did contact it several times to verify dollar amounts, but not the purposes of the expenditures.

Energi Media has contacted the Premier’s Office and the Public Inquiry for clarification about Kerr’s allegation of non-contact.

Krause’s work has been extensively debunked by Energi Media and Sandy Garossino in the National Observer.

More as this story develops.