This week’s gas supply disruptions to Bulgaria and Poland have highlighted current energy security policy challenges. The Ukraine crisis has altered the energy policy priorities in Europe, with much more attention for short term energy supply security and a focus on new supply routes for fossil fuels, with natural gas supply as a particularly challenging aspect. These new priorities interact with the 2030 and 2050 decarbonisation ambitions and may result in a shift in terms of strategic direction.

The IRENA World Energy Transitions Outlook explores new geopolitical issues such as hydrogen trade and critical materials supply that are currently at the centre of attention. The following analysis focuses on the role of renewables in an accelerated European energy transition and how to design strategies that combine decarbonisation and energy security aspects.

Europe has reached a critical point in its energy transition.

The energy prices are very high due to multiple causes:

Europe has ambitious plans to phase out fossil fuels. Already in 2019, the EU-27 reached its target of 20% renewables in final use, and the Covid crisis in 2020 with falling energy demand raised the share to 22.1 per cent in the following year. The proposal of the European Commission is to raise the renewables target from 32 per cent to 40 per cent by 2030, in order to meet the climate objective of -55 per cent by 2030 (compared to -20 per cent by 2020). In part, this also reflects the fact that countries’ National Energy and Climate Plans added up to around 34 per cent renewables by 2030. In 2021 already 38 per cent of power generation was renewables-based.

The implications for energy transition strategies

In order of priority, the phaseout of coal, oil and gas constitute the cornerstones of the energy transition.

The phaseout of coal is relatively straightforward, as the bulk of coal use can be attributed to power generation. It’s the accelerated roll-out of renewable power generation that is the cornerstone of coal phaseout. The European solar industry calls for on average 90 GW/yr of new solar PV between now and 2030 (more than a tripling from 2021 levels), and the wind industry calls for nearly a tripling of capacity additions to 27 GW per year. One key problem is the slow permitting of new renewables capacity. Streamlined permitting processes will be key to accelerating deployment to the required pace. Also, grid integration is hampered by regulatory constraints. That’s why for example hydrogen (pipelines) have emerged as a potential solution.

The phaseout of oil is closely related to the transportation sector. EU sales of electrically-chargeable cars increased 10-fold over the past five years, reaching 1.7m units last year (18 per cent market share). Forecasts suggest further growth to 6.7 mln units in 2030 and a fleet of 42.8 mil EVs. While Europe has managed to develop a massive pipeline of new battery plant, the rising battery materials cost may slow this growth.

These new electric cars in European roads will need 113 TWh of electricity for charging, around 60 per cent from public and 40 per cent from private chargers. This represents less than 5 per cent of total electricity demand. The challenge lies primarily in the rollout of charging infrastructure and ensuring that electric vehicles contribute to adequate power system management and integration of renewables through smart charging approaches. Up to 6.8m public charging points will be required across the EU by 2030. Up to 14,000 public charging points need to be installed EU-wide every week –a seven-fold increase from current levels.

The phaseout of gas is one of the most complex aspects of the energy transition. Ample gas resources exist worldwide but the potential to ship this gas to European markets is limited in the short term. The recent IPCC mitigation report indicates that global gas use needs to peak around 2030 and decline significantly thereafter.

Natural gas accounted for nearly a quarter of the EU27 energy mix in 2021 and 14 per cent of electricity generation. The bulk of natural gas was used for heating. Figure 1 illustrates three main demand categories of similar importance: 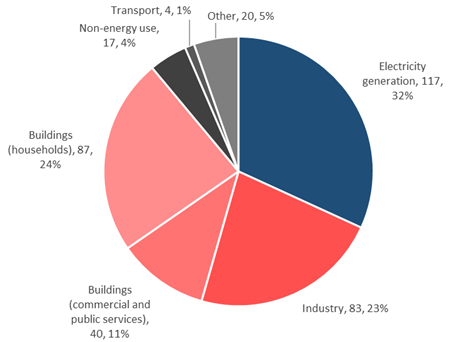 The current energy crisis has reinforced the urgency of the energy transition. Security of supply and diversification have become new priorities. The decision to halt Nordstream II and the phaseout of Russian gas deliveries is part of this redirection. The European Commission wants to cut these imports by two-thirds by the end of this year by boosting supply from other sources and reducing the demand for gas from various sectors of the economy.

Additional 50 BCM LNG imports (about a tenth of global LNG trade, or all LNG not covered by long term contracts) notably from the US can fill part of the gap, another 20 BCM or so from other sources (Norway, North Africa, increased production in the Netherlands etc). However, insufficient import terminal capacity in combination with lacking transmission pipeline infrastructure within Europe may limit the actual LNG growth this year. Some experts think the assumption is optimistic given supply side constraints.

In the power sector, the EU hopes that renewables can replace as much as 20 bcm of gas this year. This would require around 100 GW additional capacity, a significant growth compared to 37 GW solar and wind added in 2021. Given that much of this replaced gas capacity will be from such variable renewable sources, a need for clean dispatchable power is apparent which will be able to provide many of energy non-energy services provided by natural gas generators.

At the same time, gas power plant investments which secure a permit by 31 December 2030 and emit greenhouse gases equivalent to 270g of CO₂ for each kilowatt-hour (kWh) of electricity will be labelled as sustainable. Firms operating such plants must provide a plan demonstrating they will completely shift from natural gas to low-carbon fuels or renewables by December 31, 2035.

European gas demand has remained resilient through 2021 despite record high spot prices, showing limits to demand-side response. Western European demand is expected to fall by around 4.5 per cent this year, partly driven by reduced burning of gas in the power sector which could fall by 6 per cent from 2021, the IEA said in its quarterly gas market report.

One aspect that has been given limited attention to date is the industrial demand response. Industrial gas demand was in October 2021 already 12 per cent below pre-pandemic level long term averages. Fertilizer producer Yara has announced a curtailment of their urea-ammonia production units in Italy and France, citing high gas prices. Others may follow suit if current prices persist. The EU-27 produces around 13.2 Mt ammonia per year, which equals around 10 BCM natural gas use. Around one eighth of all ammonia produced worldwide is shipped and nitrogen fertilizer is shipped even more widely. So as an emergency measure this import option could be considered in order to save gas. Demand response can extend to more consumers. In some European countries changes in wholesale prices are reflected almost immediately in retail prices whereas in others it takes up to two years.

In the residential sector, reliance on gas could be reduced by 14 BCM if all households in the bloc turned down their thermostat by 1C. It remains to be seen if voluntary measures yield significant savings; if the response is weak this may have serious policy implications. Rooftop PV and accelerated heat pump deployment could yield another 5 BCM. Also solar water heaters can save gas. Much more is possible longer term but new customers are currently facing long waiting times as equipment and installers are scarce.

The revision of the energy performance of buildings directive, a key part of energy transition and a key option to reduce natural gas dependency, faces similar constraints. It’s critical to accelerate on all these aspects but they will not solve the short-term gas dependency issues. Accelerating building renovation including fuel switching warrants higher priority. 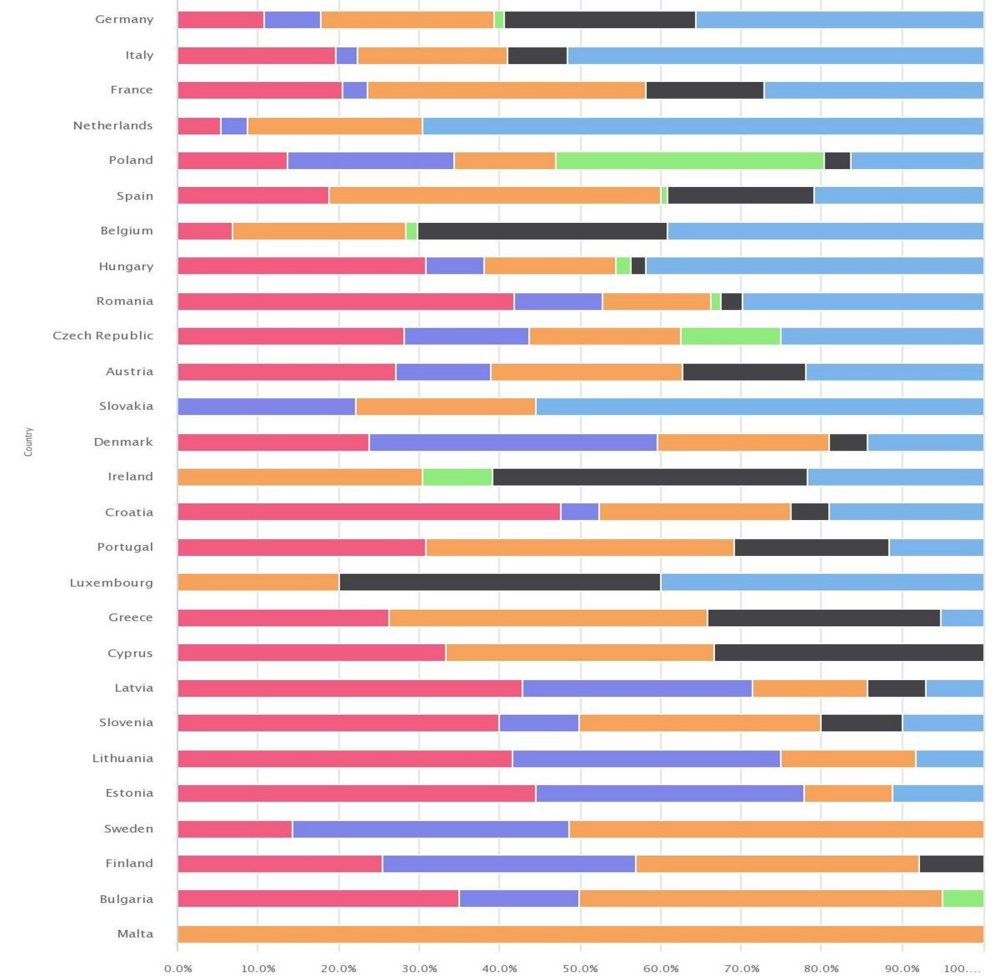 The role of green gases

Various analyses have assessed the potentials of green gases. Biogas and biomethane already account for 4.6 per cent of gas supply. Expansion to 35 BCM is foreseen for 2030. The number of biomethane plants grew substantially in 2021, with more than 1,000 plant in operation.

The European Commission plans foresee 20 million tonnes of green hydrogen production and imports by 2030, the equivalent of 85 BCM natural gas.To put that ambitious objective into perspective, this will require 200 GW of electrolyser capacity and 400 GW of solar and wind generation capacity (at present there is only 0.5 GW of new electrolysers installed in 2021 worldwide).

The most promising hydrogen market segment, renewable ammonia, has currently the equivalent of around 3-4 Mt hydrogen in new projects planned worldwide for 2030, as an upcoming IRENA study reveals. Various new initiatives look into hydrogen and ammonia sourcing, for example from North Africa. But it will take a couple of years to establish this capacity. Finally the way carbon accounting is implemented in the context of Carbon Border Adjustment Mechanisms may have a significant impact on future trade flows, which may also affect future gas demand.

The Ukraine crisis has brought renewed and urgent attention to the issue of energy supply security in Europe. The pressing need to reduce import dependency of key carriers such as natural gas and oil has reopened a public debate about European energy policy priorities.

Further diversification of fossil energy sources can improve energy security in the short to medium term. More temporary indigenous natural gas production – for example in the Netherlands – is being explored, as well as more LNG flows and import terminals. It is critical that such new sourcing and infrastructure is developed in a way that it does not create stranded assets or delays in the energy transition. Current plans to deal with the gas are not set in stone, the intended changes are profound. The success will also depend on temperatures in the coming winter.

Beyond the short term, diversification of fossil sources does not solve import dependency, nor does it address fundamental long-term energy and climate challenges for Europe. A strategy based on renewable energy supply, with a decisive push towards electrification of end-use sectors and energy efficiency, can deliver the bulk of the emission reductions needed to combat climate change in the medium and long term.

This is also the right approach for Europe to minimize fossil fuel import dependency permanently. Europe has vast renewables potential which can supply the bulk of its energy needs in a fully decarbonized energy system. The current crisis brings additional arguments to accelerate the efforts to pursue such a sustainable energy system with renewables at the core, as a priority.

This content was originally published by energypost.eu on 28 April 2022.