This article was published by the International Energy Agency on March 2, 2021.

The Covid-19 crisis in 2020 triggered the largest annual drop in global energy-related carbon dioxide emissions since the Second World War, according to IEA data released in early March, but the overall decline of about 6 per cent masks wide variations depending on the region and the time of year.

After hitting a low in April, global emissions rebounded strongly and rose above 2019 levels in December. The latest data show that global emissions were 2 per cent, or 60 million tonnes, higher in December 2020 than they were in the same month a year earlier. Major economies led the resurgence as a pick-up in economic activity pushed energy demand higher and significant policies measures to boost clean energy were lacking. Many economies are now seeing emissions climbing above pre-crisis levels.

“The rebound in global carbon emissions toward the end of last year is a stark warning that not enough is being done to accelerate clean energy transitions worldwide. If governments don’t move quickly with the right energy policies, this could put at risk the world’s historic opportunity to make 2019 the definitive peak in global emissions,” said Dr Fatih Birol, the IEA Executive Director. “In March 2020, the IEA urged governments to put clean energy at the heart of their economic stimulus plans to ensure a sustainable recovery. But our numbers show we are returning to carbon-intensive business-as-usual. This year is pivotal for international climate action – and it began with high hopes – but these latest numbers are a sharp reminder of the immense challenge we face in rapidly transforming the global energy system.”

The 2020 trends underscore the challenge of curbing emissions while ensuring economic growth and energy security. Amid a growing number of pledges by countries and companies to reach net-zero emissions by mid-century, the rebound in emissions shows what is likely to happen if those ambitions are not met with rapid and tangible action.

Emissions in China for the whole of 2020 increased by 0.8 per cent, or 75 million tonnes, from 2019 levels driven by China’s economic recovery over the course of the year. China was the first major economy to emerge from the pandemic and lift restrictions, prompting its economic activity and emissions to rebound from April onward. China was the only major economy that grew in 2020.

In India, emissions rose above 2019 levels from September as economic activity improved and restrictions were relaxed. In Brazil, the rebound of road transport activity after the April low drove a recovery in oil demand, while increases in gas demand in the later months of 2020 pushed emissions above 2019 levels throughout the final quarter.

Emissions in the United States fell by 10 per cent in 2020. But on a monthly basis, after hitting their lowest levels in the spring, they started to bounce back. In December, US emissions were approaching the level seen in the same month in 2019. This was the result of accelerating economic activity as well as the combination of higher natural gas prices and colder weather favouring an increase in coal use.

“If current expectations for a global economic rebound this year are confirmed – and in the absence of major policy changes in the world’s largest economies – global emissions are likely to increase in 2021,” Dr Birol said. “Nonetheless, there are still reasons for optimism. China has set an ambitious carbon-neutrality target; the new US administration has rejoined the Paris Agreement and is putting climate at the heart of its policy-making; the European Union is pushing ahead with its Green Deal and sustainable recovery plans; India’s stunning success with renewables could transform its energy future; and the United Kingdom is building global momentum toward stronger climate action at COP26 in November.”

Global emissions plunged by almost 2 billion tonnes in 2020, the largest absolute decline in history. Most of this – around 1 billion tonnes, which is more than the annual emissions of Japan – was due to lower use of oil for road transport and aviation. As travel and economic activities pick up around the world, oil consumption and its emissions are rising again. The record increase in sales of electric vehicles is insufficient to offset the growth in emissions caused by the uptick in road traffic around the world.

In order to show a sustainable path forward, the IEA will publish on 18 May the world’s first comprehensive roadmap for the energy sector to reach net-zero emissions by 2050. As part of its focus on leading clean energy transitions worldwide, the IEA is working with the United Kingdom’s COP26 Presidency to bring together heads of government and ministers at the IEA-COP26 Net Zero Summit on 31 March to step up international efforts to turn net zero pledges into concrete energy policies and actions.

In April, the IEA will release its Global Energy Review 2021, which will examine this year’s emerging trends in global energy demand and CO2 emissions.

Global energy-related CO2 emissions were 2% higher in December 2020 than in the same month a year earlier, according to IEA data, driven by economic recovery and a lack of clean energy policies 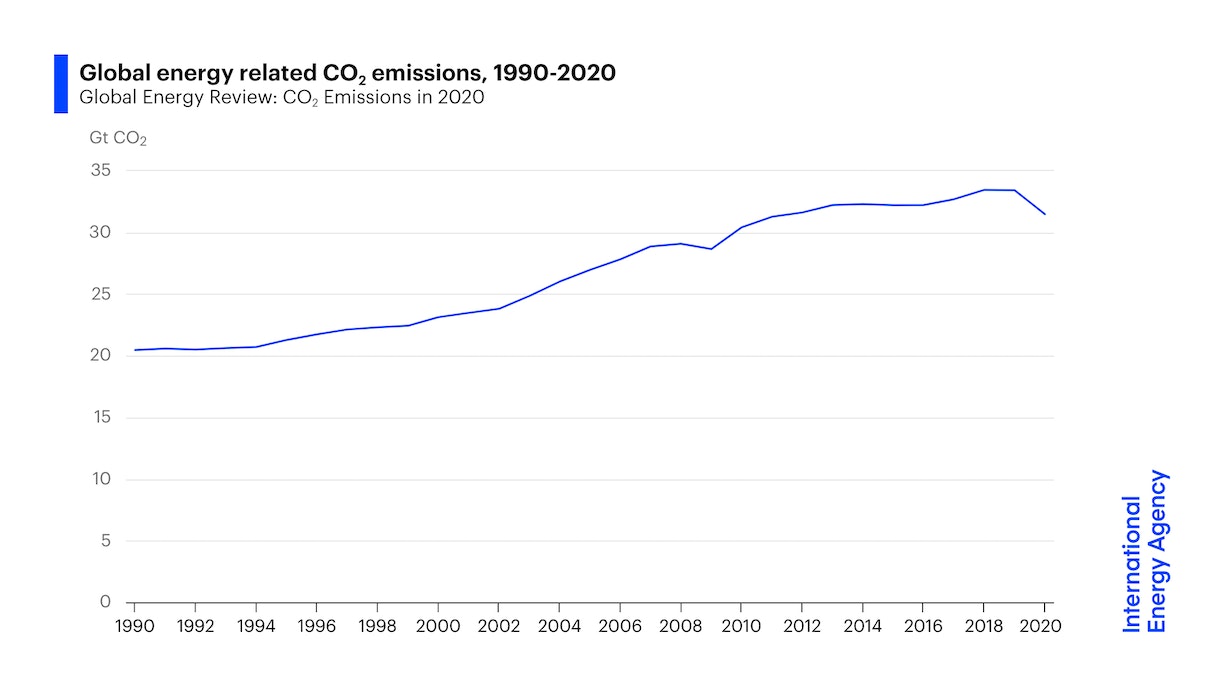 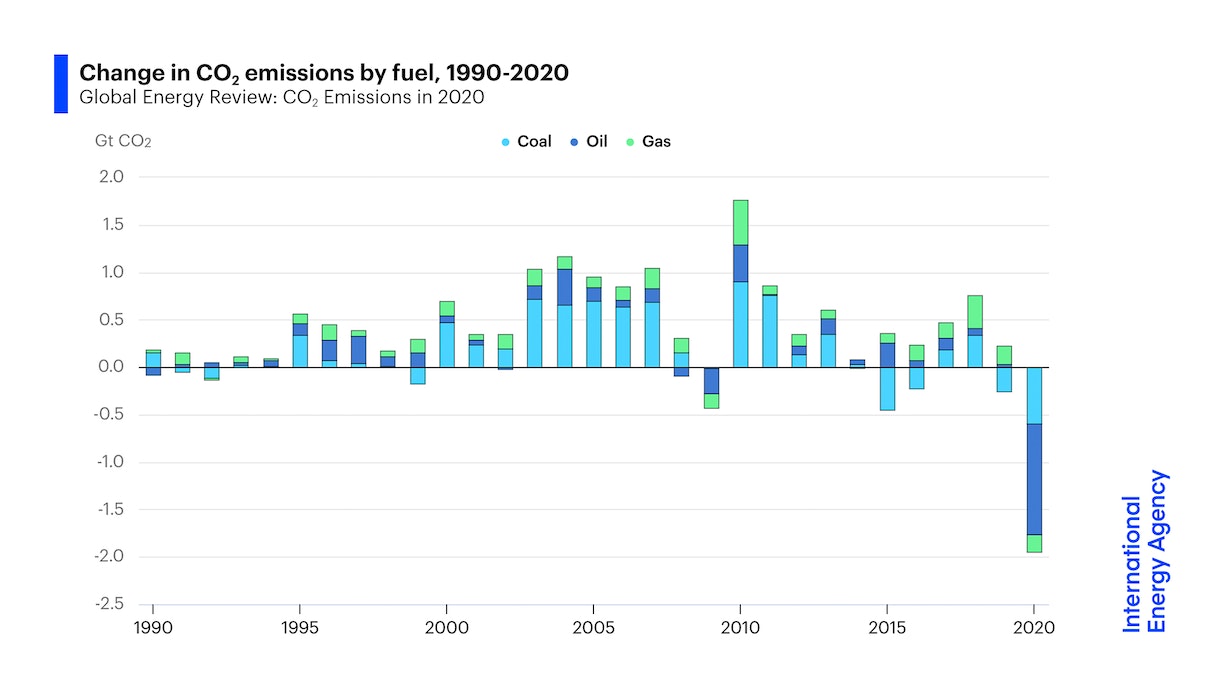 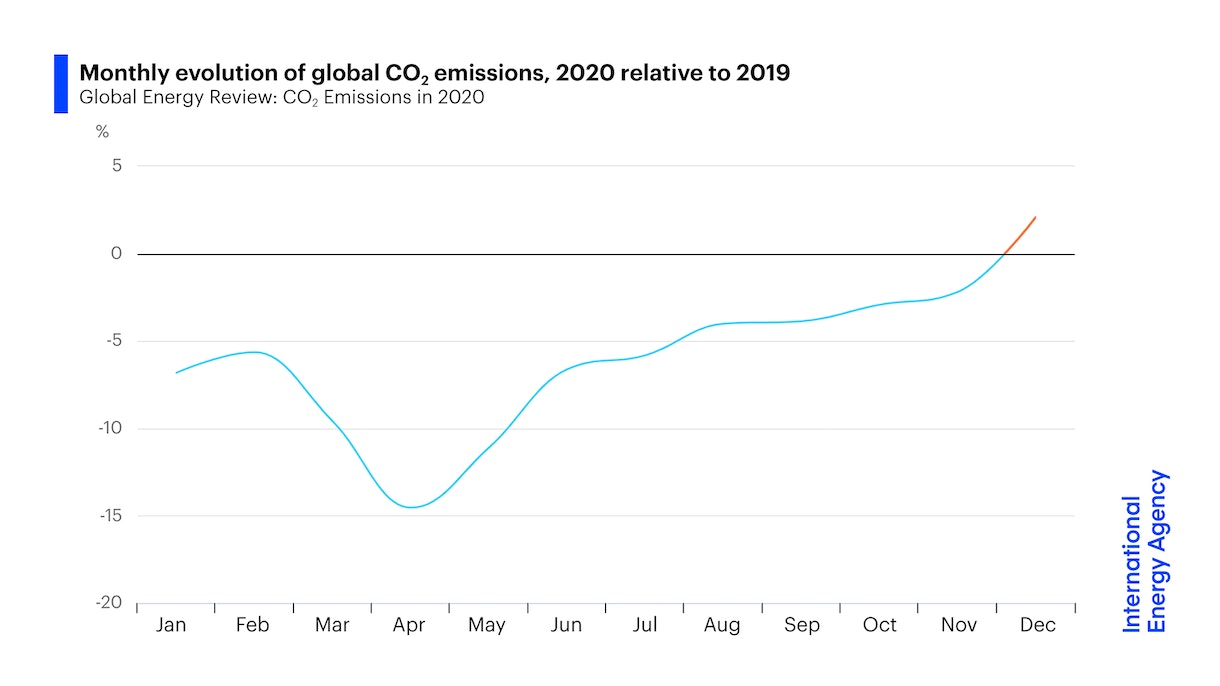 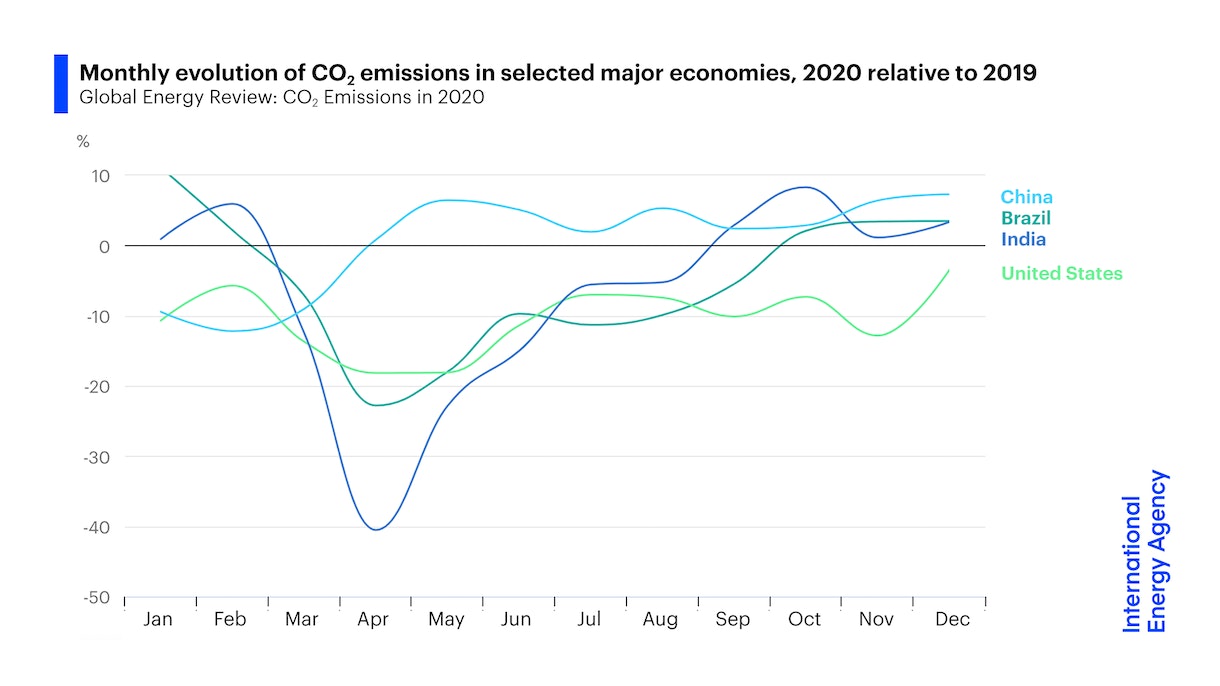