Alberta plans to spend $1 billion over eight years to boost commercialization of bitumen partial upgrading technology, just one of a number of recommendations from the Energy Diversification Advisory Committee that were released Monday. Premier Rachel Notley says more announcements about support for petrochemicals and changes to provincial agencies and regulations will follow over the coming weeks. 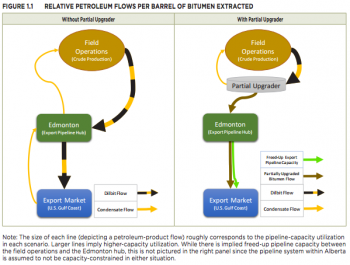 “We are blessed with a greater variety of natural resources than anywhere in the world, but right now we’re not getting full value for them. As we fight for new pipelines and a better price for our oil, we must also create the right conditions for investment and jobs in oil and gas processing and manufacturing,” Notley said at a press conference.

“This is the same vision Premier Lougheed had for Alberta, and I’m proud to move that vision closer to reality.”

Partial upgrading reduces the thickness of oil sands bitumen, which has the consistency of peanut butter, so flows through pipelines more easily without having to be blended with “diluent” (a lighter hydrocarbon like naptha), which the report says will enhance oil sands industry competitiveness by reducing industry costs, increasing pipeline capacity and enabling more refineries to process Alberta bitumen product.

The Alberta government will provide support up to $1 billion for partial upgrading over eight years beginning in 2019-20.

Available fiscal tools will include loan guarantees and grants, which will leverage construction of two to five partial upgrading facilities, representing up to $5 billion in private investment, 4,000 jobs during construction, and 200 full-time jobs during operation, according to the release.

“Alberta needs to begin preparing now for the global energy economy of the future. This means building on our existing strengths, which include a wide variety of resources, a skilled workforce and a world-class petrochemical industry,” said Jeanette Patell, EDAC co-chair and a executive with GE Canada.

“The initial response is a great sign the government is focused on made-in-Alberta solutions for securing a more diversified energy sector.”

The committee’s final report included 36 recommendations. The government says it “has accepted the committee’s advice and is moving forward immediately on a number of fronts.”

A study by the University of Calgary estimated the impact of partial upgrading could be worth up to $22 billion in GDP growth for Alberta over 20 years.

The study estimates there are 10 partial upgrading technologies at various stages of development in Alberta. Most of them will require financial assistance to move beyond demonstration and pilot projects.

Researchers used MEG Energy’s HI-Q technology for their case study and found significant benefits for Alberta and the industry including $10 to $15 per barrel “value uplift,” up to 30 per cent more room in than is currently available in pipelines because of the space required for the diluent (which has little value), and up to 17 per cent fewer emissions, though those benefits would accrue to the jurisdictions where the fuel was burned, not Alberta.

Naushad Jamani, senior VP for NOVA Chemicals said that the “deep history” of his company shows that downstream diversification in Alberta can be successful.

“We have seen the positive impact of employing Alberta’s considerable resources, innovative technology, and talented people to encourage billions in new investment, ensure high-paying jobs for Albertans, and create lasting growth in our communities,” he said in the release.

“This government’s efforts to implement the EDAC report will build upon Peter Lougheed’s legacy, creating the next generation of value-added opportunities and allow companies like ours to continue to grow here in Alberta.”