Canadian economic growth is expected to grow by 2.0 per cent in 2018, higher than initially forecast, according to the Conference Board of Canada.  Seven Generations Energy photo.

The Conference Board of Canada says it expects the Canadian economy to grow by 2.0 per cent in 2018, up 0.2 percentage points from its previous forecast.

“The Canadian economy performed well in the second quarter of 2018, with consumers increasing their pace of spending, businesses raising investment in their capital stock and a double digit increase in exports,” said Matthew Stewart, Director, National Forecast.

“However, significant challenges remain, which will slow growth over the remainder of the year and into 2019.”

Risks to this forecast are substantial due to trade uncertainty.  According to the Conference Board of Canada, a collapse of NAFTA would likely subtract 0.5 per cent from growth.

Meanwhile, there is a broader risk if the U.S. and Canada increase tariffs. This could subtract as much as 1.3 per cent from Canada’s economic growth over a two-year period, according to the Conference Board’s Canadian Outlook: Autumn 2018. 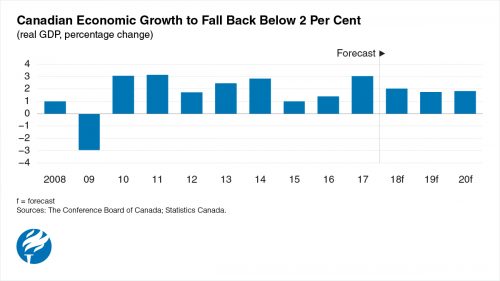 The Conference Board says the Canadian economy will slow to 1.8 per cent in 2019.

The economic acceleration in the second quarter of 2018 took a “significant portion out of the economy’s excess capacity,” writes the Conference Board.  As a result, the Conference Board expects the Bank of Canada will boost its interest rate in October and increase rates three times next year.

Despite the challenges faced by several sectors, exports are expected to climb back up to the 2 per cent range this year, thanks to a weak loonie and a strong U.S. economy.

However, concerns over trade negotiations, carbon taxes, and Canada’s tax competitiveness are all creating an uncertain operating environment and impacting the willingness of firms to increase their capital spending.

With little growth in new manufacturing capacity, exports of non-energy goods will remain weak. Energy exports are expected to continue to post strong gains. However, lower investment levels will eventually weigh on the sector’s growth prospects.

Meanwhile, employment growth has weakened significantly—the Conference Board expects the economy to add 213,000 jobs in 2018, compared to the 337,000 new positions created last year.

While gains in average weekly wages have also slowed recently, wages are still expected to grow by a solid 3.1 per cent this year before weakening significantly next year. When combined with the high-level of household debt, real consumer spending is expected to advance at a slower pace than in recent years.

Canada’s housing markets will continue to cool through the second half of 2018, though a major correction is not in the cards. Recent policy changes designed to temper demand appear to be achieving policymakers’ objective of easing housing prices.

Canada’s average resale price is down about 6.5 per cent compared to the same period last year. Demand for new homes will continue to be limited by rising interest rates, moderating employment growth and an aging population over the next two years.