For a host of reasons – some historic, some cultural – Calgary-based oil/gas and pipeline companies think they can build energy infrastructure and expand the oil sands without engaging with Canadians outside Alberta. From the C-suite on down, industry believes that the economic benefits of energy expansion are so staggeringly large that they should simply over-ride objections from opponents, especially when it comes to climate policy. Dave Collyer, Calgary-based energy executive, disagrees.

This is the second part of my interview with Collyer. In the first part, he talked about the global consensus to address greenhouse gas emissions and gradually decarbonize the energy sector. He argued that industry is worried about competitiveness, about climate policy – such as the Alberta NDP government’s carbon tax, oil sands emission cap – that could raise costs so high that Alberta oil and gas can’t compete in an increasingly competitive global market.

That concern has led many to oppose climate policies at both the provincial and federal level. Collyer thinks industry digging in its heels is a big mistake.

In Part 2 of the interview, he argues that the Alberta-based oil and gas industry must engage Canadians in British Columbia, Ontario, and Quebec, building support for new pipelines and access to new markets.

And engagement can’t wait. The window is open now, Collyer says, but it may close soon if Alberta doesn’t act.

Markham : Let me tell you an anecdote, get get your reaction to it.  I recently debated Dr. Gordon Cornwall of the Green Party of Canada at the Vancouver Public Library on the topic of, “Trans Mountain Expansion pipeline and the Oil Sands: economic boon or boondoggle?” I was the debater defending TMX and the oil sands. The audience was almost entirely Green Party members. The moderator said, “We asked Kinder Morgan to participate, they refused. We asked CAPP [Canadian Assoc. of Petroleum Producers] to participate, they refused. We scoured Vancouver high and low looking for somebody to take the ‘boon’ side of this debate, and Markham was the only person in Vancouver we could find.” After the debate, a number of Green Party types told me my energy transition argument was far more compelling and they were re-considering their opposition to TMX. Is that the kind of engagement outside Alberta the oil and gas industry should do more of?

Dave Collyer: I think it is. Let me make a couple of observations along that line.

And given those two things, we believe, as you said, that we ought to have the right to compete in the marketplace. If there’s no market, if the world transitions off oil faster, then obviously we’ll have a problem.

But we ought to have the ability to compete in that market with the qualifier that we are up for strong climate policy and we are up to being held accountable for our performance.

Donate now! Please support quality journalism by contributing to our Patreon campaign. Even $5 a month helps us continue delivering high quality news and analysis about Canadian and American energy stories that affect your life and your lifestyle.

[Canadians outside Alberta] should say that if Alberta is prepared to do those things ,then within reason there ought to be new pipeline capacity, there  ought to be access to markets, we ought to have the right to compete.

That’s a very sound argument. I believe you can have strong environmental performance and continue to grow the economy.” 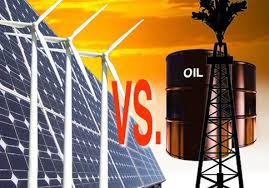 Somebody has to fund the [energy] transition. These things aren’t going to happen by themselves, so if nothing else, it just serves provide revenue for some period of time – potentially a long period of time – to facilitate and enable the transition.

The second part of what you said is that I think our industry needs to be better on message. From my personal perspective, we also need to be more prepared to go into places where we know the audience is not going to be initially supportive of that message.

Your example of the Green Party debate is a good one. We need to be prepared to go and have that conversation and step out into more difficult environments.

Talking to chambers of commerce around the country doesn’t really help us very much because for the most part those are people who would be broadly supportive of the agenda that we’re talking about. I think we need to be much more prepared to talk to people with an opposing agenda and at least express to them what I believe is the responsible position to take.

Hopefully that influences some of them.

At least it demonstrates that industry [and Alberta] is willing to step out and convey our message in a reasonable and balanced way with people who at least don’t initially support it.