“Global demand for oil and gas will be strong in the coming decades.”  – Alberta Premier Jason Kenney

If an anti-EV screed shows up on my social media accounts, chances are it was posted by an Albertan. That tribe’s identification with oil runs deep. But the reflexive push back against threats to hydrocarbon’s hegemony also blinds Alberta to the existential threat posed by electricity. In the not too too distant future, that myopia spells trouble. 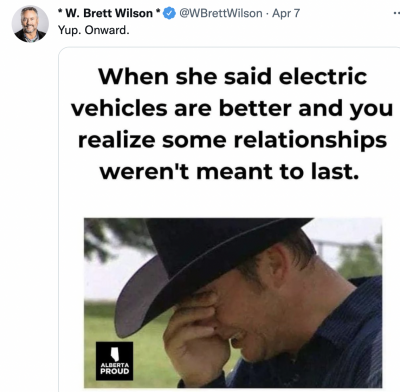 “There’s still a tendency for Albertans in our industry to look at things very much through our lens, as opposed to the lens of people outside Alberta,” says Dave Collyer, oil and gas industry veteran and former president of the Canadian Assoc. of Petroleum Producers.

The “Alberta lens” is a funhouse mirror, distorting reality outside the epicentre of the Canadian oil and gas sector.

Albertans venerate innovation and the oil and gas engineers who make the impossible possible. They can point to any number of technical triumphs – the invention of steam assisted gravity drainage to extract oil sands bitumen, for example – as proof. But they don’t extend the same courtesy to wind, solar, battery, software, firmware, and electric vehicle engineers, the architects of their competition.

And that competition is ready to begin shoving oil out of the transportation market. EVs became competitive so quickly because automakers responded to the threat from pioneering Tesla and its enigmatic CEO Elon Musk by throwing billions of dollars at huge teams of scientists and engineers, who then built on 1990s innovations like lithium-ion batteries.

Like every overnight success, electric vehicles are the product of years of hard work out of sight of the public eye.

Interviewing dozens of experts from the United States, Europe, and Asia over the past five years has opened my eyes to the pace and scale of change in the transportation sector. I often ask analysts if the oil industry understands the electric tsunami that is about to drown it. A chuckle usually precedes the answer, which is always the same: No, it doesn’t have a clue.

This isn’t entirely fair. Alberta oil boosters have a clue, just a faint one. They think EVs won’t be competitive until well into the 2030s, that battery champions exaggerate the promises of lower prices and longer range, and that oil will be needed for many decades after 2050. Boosters cling to the status quo like a life raft.

The rebuttal to that myopia is batteries.

According to Dr. James Frith, former head of BloombergNEF storage analysis, last year the average cost of an EV battery pack was $132 per kilowatt hour. By mid-decade, it will be $100, the threshold at which the EV purchase price will be equal to gas-powered cars. By the late 2020s, the cost will be $60 to $80 and by the early 2030s, just 10 years from now, it could be under $40. At the same time, energy density (which determines range) is rising seven per cent annually.

By 2030, most EVs will be cheaper to buy and drivers will be able to travel 50 per cent further on a charge. At that point, the game will be well and truly over, with EVs the clear victor.

Albertans need to grasp one unassailable but uncomfortable truth: consumers like you and me do not decide if cars will be powered by electricity or gasoline. That choice is up to automakers and the GMs of the world chose electricity. Almost all of them will ditch the internal combustion engine between 2030 and 2035.

Too many Albertans, unfortunately, refuse to accept the new energy reality, mostly because they still view their economic future through their ideological funhouse mirror, the “Alberta lens.” That distorted worldview is supported by a cottage industry of astroturf organisations like Canada Action and tinpot ideologues like Kenney and industry junk yard dog Brett Wilson. This incestuous, self-interested elite wields the “Alberta lens” to exert an outsized influence on Alberta energy politics.

The elite’s arrogance will be Alberta’s undoing. Not today, nor even by 2030. But sometime during the 2030s, most likely, the province’s economic star will dim with the arrival of peak oil demand followed by the inevitable decline.

The elite would do well to remember that for the massive, slow-moving oil industry, a decade is like tomorrow and the clock is ticking.