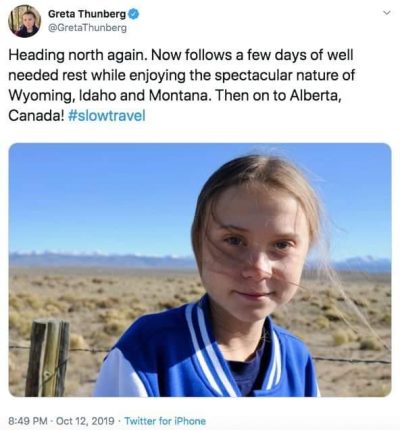 Energi Media is publishing this open letter with the hope it will help her understand that there are Albertans in the oil and gas industry who support her goals.

Alberta is the epicentre of Canada’s oil and gas industry, deeply conservative, and more like Texas than Sweden, with a higher percentage of climate deniers and skeptics than any other province. As you can see from the Alberta government’s statement about your arrival, defending the status quo and deflecting blame is the order of the day.

“We trust that Ms. Thunberg will recognize Alberta’s leading human rights and environmental standards, especially in comparison to oil-producing dictatorships such as Saudi Arabia, Iran, Russia, and Venezuela — which she will presumably visit next — as well as major growing emitters like China,” Christine Myatt, a spokeswoman for Alberta Premier Jason Kenney, said in a statement emailed to media.

You may, however, find allies in what seems the most unlikely of places: the oil sands producers. These companies are responsible for 80% of Alberta oil production. They recognize climate change as a material threat, support climate policies like carbon pricing, and are busy reducing the carbon-intensity of their heavy crude oil. Lowering overall emissions from this sector remains challenging, but the companies are furiously innovating, spending hundreds of millions of dollars on new technology development, to reach that goal. 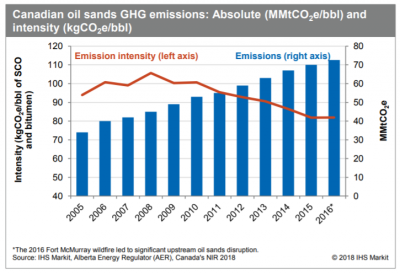 In fact, of all the heavy crude-producing jurisdictions in the world, only Alberta companies are committed to decarbonizing their production. Their goal is to be the “best barrel” of heavy crude oil in the world. When demand for liquid fuels begins to decline as transportation is gradually electrified, Alberta producers intend to provide the lowest cost and least carbon-intense product in the market, including providing feedstock for the emerging crude-oil-to-petrochemicals complexes likely to be built in China.

The growth of non-combustion markets for heavy crude is one reason why the oil sands should not be summarily dismissed even though they currently emit around 80 megatonnes (Mt) per year, more than 10 per cent of total Canadian emissions and 30 per cent of Alberta’s 263 Mt per year. Within the context of the 10 million barrels per day global heavy crude oil market, Alberta oil sands companies are the good guys with the best barrel and they’re committed to making it a better barrel in the future.

This last point is one you may want to raise with the Premier and Energy Minister Sonya Savage if you get the chance.

Canadian conservatives, including federal leader Andrew Scheer, are eschewing policy in favour of subsidizing technical innovation to reduce emissions, taking a page out of the Trump Administration’s playbook. Energy Secretary Rick Perry’s mantra is “innovation, not regulation,” an idea you’ll probably hear quite often in Alberta. The problem with this approach is that it’s like pushing string – it doesn’t matter how hard you push, the string moves much faster and you have more control of its direction if you pull.

From your point of view, governments should pull not push their emissions reductions efforts.

One final thought: don’t fall for the talking points about ethical oil and leading environmental standards.

Alberta exporters and energy professionals don’t hesitate to do business with Saudi Arabia and other non-democratic oil-producing countries if there is a buck to be made. And you may want to remind Premier Kenney and Minister Savage that not one drop of oil is bought or sold on global markets because it is somehow more “ethical.”

As for Alberta’s environmental standards, compared to many international competitors they are high, but there is only anecdotal evidence that they are the highest and plenty of evidence to suggest they are not. The 37 oil sands tailings ponds containing 1.3 trillion litres of toxic waste is just one example of the issues Alberta needs to fix before it can rightfully brag about world class regulatory excellence.

Greta, while you’re visiting the Wildrose Province, keep in mind the central contradiction of Alberta oil and gas in the age of climate crisis: the Kenney government allied with the conservative elements of the oil patch resist change while the oil sands companies support progressive policies as they pivot to a low-carbon future.

Thanks to global media attention, you have an opportunity to chastise the bad in Alberta, but also the opportunity to praise and support the good, which are those companies and the climate progressives in the oil patch who champion decarbonization and lower greenhouse gas emissions.