Substituting solvents for steam could lower costs, GHG emissions by 34% to 40%, says CERI

They say a year is a lifetime in politic. For Cenovus Energy, it’s only been six months since the Calgary-based oil sands giant was vilified for spending $17.7 billion to buy ConocoPhillips’ oil sands and Deep Basin assets. The company’s share price plunged overnight and pundits moaned about “capital flight” from Alberta. Then, on Friday, Cenovus reported higher-than-expected third quarter financial results of 28 cents a share, almost tripling analysts’ expectations. Pay attention because things are going to get even more interesting over the next year or two.

Cenovus is on a mission to drive down production costs to ridiculously low levels because it agrees with Royal Dutch Shell CEO Ben Van Beurden that oil is heading into a “lower forever” environment. 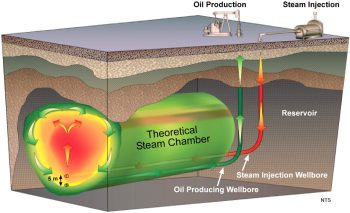 The innovation evangelist within the C-suite is Harbir Chhina, Cenovus’ chief technology officer, a chemical engineer who joined the company three decades ago when it was still Alberta Energy Company, set up by the Alberta government of Peter Lougheed in 1973 and later spun off as Cenovus (oil) and Encana (gas).

Chhina was an early leader in the development of SAGD (steam-assisted gravity drainage), the in situ process that will spearhead the growth of the oil sands by 1.3 million b/d between now and 2030.

“For me, for my generation, Harbir is the godfather of in situ development,” Drew Zieglgansberger, a Cenovus employee who considers Chinna a mentor, told Alberta Venture. “We were the first company to do SAGD on a commercial scale and it was almost entirely on his back.”

The period from roughly 2000 to the present is the first phase of SAGD, according to Kevin Birn of IHS MarkIt, and the technology appears ready for a next generation leap forward in efficiency and effectiveness.

I caught up with Chhina at a recent event and during the interview he told that Cenovus has already reduced cash operating costs by 30 per cent since the 2014 oil price crash, which puts them in the $7/b to $10/b range depending upon the field.

He thinks another 20 per cent reduction is possible. The company intends to meet that goal with the help of three technologies:  substituting solvent for steam, big data and analytics, and improved well/well pad design.

Dinara Millington, research director for the Canadian Energy Research Institute, says the biggest benefit of using solvents was an increase in “the uplift in the production flow…the well or the project produces above the original production capacity. You utilize a similar amount of energy but you’re producing more.”

Years ago, Cenovus developed a “solvent-aided process” that uses light hydrocarbons (e.g. propane, ethane, butane) to the viscosity of the bitumen (which has the consistency of peanut butter), allowing it to be pumped to the surface.

“We’ve looked at combining solvents. Just because we start with one solvent doesn’t mean we have to stay with that solvent,” he said in an interview.

The next big push will be low temperature solvents that are effective in a 100 degree Celsius environment.

“If we could make that work, that would drop our steam oil ratio by 75% which is a game-changer,” he said. “Lower temperature solvents is where the focus should be. There are companies looking at electrical heating and things like that, those technologies are on our watch and wait list.”

In Part 2 of this column I’ll describe how Cenovus is using big data/analytics and better well/well pad design to lower its production costs to levels that would enable them to compete with all but the ultra-low cost producers like Saudi Arabia.