The past year gave us the incendiary phrase “rage farming.” It means to stoke anger for crass political purposes. The Big Lie (repeat a falsehood often enough and it becomes the truth) and conspiracy theories are the favourite implements of rage farmers. Premier Danielle Smith, the former radio shock jock, is a rage farmer. Her latest Big Lie is that the Prime Minister will use Just Transition legislation to shut down the Alberta oil and gas sector.

“@JustinTrudeau intends to shut down our energy industry through something he calls the ‘Just Transition’ plan,” Smith tweeted Thursday. “I won’t let him.” She then set the bait, calling on NDP Leader Rachel Notley to “put partisanship aside for the sake of Alberta’s economy and join us.”

Notley ignored her. Albertans should follow suit because they will hear plenty more about the supposed evils of “just transition” between now and the May election. And it will be nothing but more rage farming.

Which is sad. The idea of “just transition” is sensible and fair, qualities Albertans admire. As the the global energy system slowly transitions away from fossil fuels, workers  should be helped to build new careers and communities should be helped to build new industries. The Government of Scotland prepared a useful backgrounder on various types of “just transitions” that is worth reading.

Alberta has already lost 33,000 oil and gas direct jobs in the past 10 years. Most of them were service sector jobs. Regional hubs like Red Deer and small towns like Taber and Wainwright depended on those jobs. Rig hands and pumpers and supply salesmen bought gas at the local service station and meals at the local restaurants. High wages paid mortgages and vehicle payments.

Where was the support for those workers when their jobs disappeared? Sure, there were the usual unemployment programs. And Notley was roundly criticized by conservatives for deficit spending, in part to maintain services in those communities, from 2015 to 2019.

But the assumption has always been that the bust would be followed by a boom. The jobs would return, as they always have. Unfortunately, that assumption no longer holds.

Ironically, oil and gas companies and their suppliers are to blame. The industry was slow to adopt digital technologies like artificial intelligence and big data/analytics compared to other industries like manufacturing. But it’s making up for lost time now. Fewer and fewer workers are needed to produce more and more oil and gas.

The graph above shows a steady decline in employment, while the one below shows ever rising oil output. In fact, oil supply grew by over a million barrels per day during the decade those 33,000 jobs vanished.

It’s going to get worse. A 2020 EY study estimates that 30 per cent of the Canadian oil and gas workforce, about 50,000 jobs, will be lost by 2040 because of digital technologies. Alberta experts think those jobs will be gone this decade as companies mercilessly drive down costs. 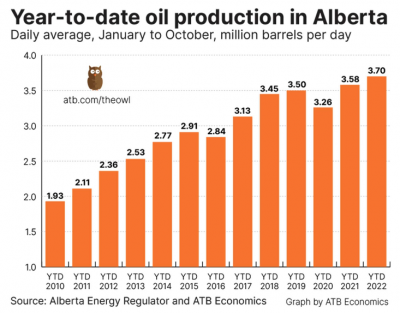 Why don’t those oil and gas workers deserve support? Their jobs aren’t coming back. And they live in communities where jobs are increasingly scarce. Shouldn’t the Alberta government welcome federal dollars to help out-of-work employees? Or should Alberta taxpayers be expected to shoulder the entire financial burden while other provinces share energy transition costs with Ottawa?

Surely Premier Smith knows about Alberta’s Coal Workforce Transition Program? The program provides “financial assistance for re-employment, retirement, relocation and education” for displaced coal workers. Ottawa was a partner and the Auditor General harshly criticized it for taking a “business as usual” approach to federal support. Lessons to be learned for next time.

Nevertheless, a “just transition” for coal seems to be OK but not for oil and gas. The Premier needs to explain why.

The energy transition is a global process driven by new technologies, including digital ones. Change is inevitable. And Alberta cannot resist that change. Better to acknowledge change is underway now and to plan for it.

Smith’s rage farming would be comical if she wasn’t playing with the lives of Alberta workers, their families, and their communities. Today’s it rural Alberta, but tomorrow it will be Calgary and oil company head offices. Calgarians remember oil and gas engineers trudging through the +15s looking for work during the last bust, that started in 2015. Those engineers were often told by employers in other industries that their hydrocarbon experience was a liability. A “just transition” program could have helped them build the skills needed to get a new job.

But agreeing to a “just transition” for oil and gas workers would be a tacit admission that Alberta’s future has clouds on the horizon. That Alberta could use Canada’s help. That Alberta governments – including the Progressive Conservatives, NDP, and UCP – have spent too much time supporting the oil and gas status quo and not enough time paying attention to what’s going on in the rest of the world. That oil and gas is no longer the prosperity engine it once was in Alberta, as CD Howe economist Glen Hodgson explains in this interview.

It’s far easier to beat Justin Trudeau like a political piñata than for Smith to admit she doesn’t have a clue about how Alberta should manage the energy transition. Oil and gas workers need help now and they will need more help in the future. The Premier should stop playing petty partisan politics with their livelihoods and support the federal Just Transition legislation when it is introduced in the near future.