Teck Frontier decision is seminal moment for Canada, which must demonstrate it is capable of negotiating treacherous path to climate action and economic development

The federal government is expected to decide on the future of the Teck Frontier oil sands mining project by the end of February. Alberta is pressing for an approval, which it should not get. Ottawa needs to send a strong message to industry and the UCP government that opposing national climate policies has consequences.

Canada has set the goal of net-zero emissions by 2050. Oil sands companies Cenovus Energy and MEG Energy have announced their intention of achieving the same objective by mid-century, demonstrating that Canada’s most emissions-intensive industry believes it can adapt to a low-carbon future.

The Alberta-based industry’s leadership, however, is riddled with climate deniers, climate laggards, and climate policy opponents. The Canadian Association of Petroleum Producers has never explicitly acknowledged the severity of global warming, never embraced carbon pricing, and consistently calls for climate regulations to be watered down or eliminated.

As the Texans are wont to say, this is a “coming to Jesus” moment for Alberta.

On November 22, 2015 the Rachel Notley-led NDP government announced the Climate Leadership Plan, a robust suite of climate and energy policies that enabled the province to leapfrog from climate laggard to climate leader. The plan included a province-wide carbon tax, more aggressive large emitter carbon pricing (heartily supported by the oil sands companies), a 100 megatonne per year oil sands emissions cap, a coal power phase-out, energy efficiency programs, and a host of other strategies to arrest the growth of – and eventually reduce – Alberta’s runaway greenhouse gas emissions. 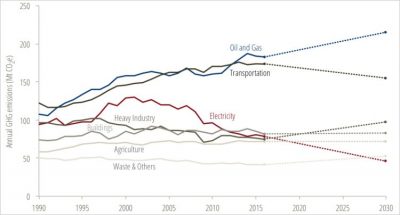 This was the quid pro quo, the handshake deal between Notley and Trudeau: from now on, oil and gas development would be linked to climate action.

Canadians approved. Public opinion polling by Abacus Data showed again and again that pragmatic Canadian voters favoured a gradual transition to a low-carbon economy. If their government supported the energy transition and the reduction of national emissions, then they would support pipelines and more oil and gas output.

Jason Kenney and the United Conservative Party opposed this grand bargain and ran hard against it in the run-up to the April, 2019 election. During the campaign, he promised to kill the province-wide carbon tax and revamp or undo the rest of the Climate Leadership Plan.

When he won with a resounding victory, Kenney followed through on his promises.

Over the past nine months, he has fought tooth and nail against the Liberal climate plan, campaigning relentlessly in Ontario for Andrew Scheer and the Conservative Party of Canada. The Alberta government is suing Ottawa in federal court to remove the imposition of the federal carbon tax. The widely praised Carbon Competitiveness Incentives Regulation was replaced with the UCP TIER scheme that is better at reducing emissions in the power generation sector, but a significant downgrade for oil and gas (the oil sands alone make up 10% of national emissions). Alberta recently tabled new methane emissions reduction rules that have been criticized as weak and ineffective.

The Kenney government is not serious about climate policy. The best face that can be put on Alberta’s efforts under the UCP is that the government is negotiating hard to do the absolute bare minimum to avoid having Ottawa force climate backstop policies – like the carbon tax – on the province.

Alberta obstreperousness must end. And the Teck project is the perfect opportunity for Trudeau to draw his line in the sand.

At at time when Alberta oil and gas capital investment has collapsed, leading to corporate bankruptcies and huge job losses, the Teck Frontier mine is a reprieve from the bad news, a $20 billion shot in the arm for the provincial economy and the best news industry has had for several years. Even if Teck gets approval and decides not to build – a distinct possibility because the project needs high oil prices, new pipeline approvals, and a partner – it is viewed as a symbol of Canada’s willingness to attract investment for natural resource projects.

In other words, Trudeau has leverage. He should use it.

“It’s important that all provinces are working to help Canada to achieve its targets,” federal Environment Minister Jonathan Wilkinson said earlier this week while noting Alberta’s legal fight against carbon pricing. “Provinces need to have targets. They need to have specific actions that they’re taking.”

As Energi Media has argued before, the road to Canada’s Paris Agreement targets runs smack dab through Alberta, which accounts for 36 per cent of national emissions even though it has only 12 per cent of the country’s population.

If the Prime Minister allows Alberta to skate this time, he sends a powerful message to the global community – and Canada’s other large emitters, not to mention recalcitrant provincial governments – that his government is not serious about tackling climate change.

As Trudeau has demonstrated by his $4.5 billion purchase of the Kinder Morgan Canada assets and his commitment to build TMX, he is not anti-oil and gas development. He has consistently argued since 2015 that Canada can both develop its resources and meet its climate commitments.

Well, that cannot happen if Alberta is allowed to flout federal climate objectives while enjoying the benefits of federal temerity.

The federal cabinet, the governor-in-council, should delay its decision for six to 12 months, giving it time to lay down the law for Kenney and the industry: get on board with climate policy or Teck is rejected.

This is a seminal moment for Canada, which must demonstrate to the world that it is capable of negotiating the treacherous path to climate action and economic development. Confronting a vocal, aggressive conservative premier and a powerful industry will lead to a nasty political fight, but it cannot be avoided.

With the Teck Frontier project, there is a very real possibility that Canada can have its cake and eat it, too – toughening its climate policies while still allowing oil sands expansion.

But it cannot do so while the Alberta government fights a very public rearguard action against those same policies.

The time to reign in the Kenney government and its industry supporters is at hand. Let us hope that Prime Minister Trudeau and his cabinet have the courage to of their climate convictions.