For the past five Saturday mornings, about the time we walk our dog, a convoy of big rigs, pickup trucks, and ragtag cars blitzes the main drag, Canadian flags streaming and horns blaring. People line the street, holding signs demanding more “freedom.” Social scientist Frank Graves calls them “authoritarian populists,” ordinary folk radicalized by conspiracy theories, disinformation campaigns, and bad actors that include Canadian rightwing political parties. They’re a big problem and no one seems to have a solution.

If you followed the “truckers freedom convoy” occupation of Ottawa for three weeks, then you were watching authoritarian populism in real time. Most nights, newscasts also included stories of US-Canada border blockades by other big rig-driving populists. The one at the Coutts, Alberta crossing included members of an extreme rightwing religious group who were busted with an arsenal of long guns, pistols, ammunition, and body armour.

This is the stuff of violent insurrection. Surely not in Canada, you say. But these are our family members, our neighbours, our co-workers. We all know good, decent people who have followed former President Donald Trump and his Canadian acolytes down the ragey rabbit hole to a hellish Wonderland where the Canadian Prime Minister is a “tyrant” and outlandish QAnon-fuelled conspiracy theories are the norm.

“[Authoritarian] populism never ends well,” Graves told me, not shying away from parallels with the rise of Hitler and the Nazis.

Last week I interviewed Graves and pollster David Coletto, CEO of Abacus Data, about the causes of authoritarian populism in Canada. A common theme from both interviews is economic dislocation, a perception that the economy is poor and Canadians are struggling, even if data suggests otherwise. 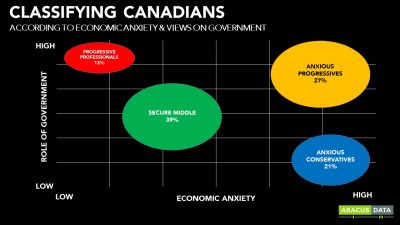 In Coletto’s polling data, economic anxiety defines four Canadian groups : anxious conservatives (21%), anxious progressives (27%), secure middle (39%), and progressive professionals (13%). The two anxious groups are financially stressed: over the past two years, seven out of ten report that their anxiety about money has worsened. Only a handful feel they are better off.

By every economic metric – how they have done versus the top 1% of earners, their perception of the tax system, and whether the future economy is a threat or opportunity – the anxious groups think their world is hanging by a thread. Their outlook is decidedly gloomy and, consequently, they’re mad as hell.

Coletto cites the example of Alberta oil sands workers, with environmentalists calling for bitumen production to be shut down and the federal government implementing robust climate policies aimed at oil and gas production. If they get laid off, there will be “green energy” jobs, like installing solar panels, they are told, but the pay may be only half their former wage. 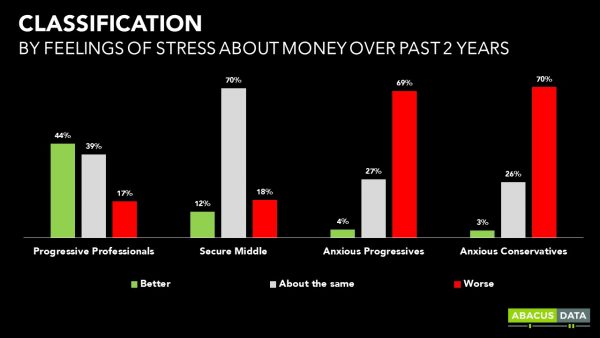 For Graves, the CEO of EKOS Research Associates, the conflict is particularly sharp for Canadians under 50, regardless of political affiliation. These citizens feel that the dream of a middle class lifestyle – buying a house, for example – is slipping away. “Their level of economic despair is really very striking,” he said.”

Canadians with no or little post-secondary education are particularly prone to being radicalized through social media disinformation campaigns. Their angst is further inflamed by irresponsible Conservative politicians, like CPC leadership hopeful Pierre Poilievre, who trade in authoritarian populist language and narratives.

“Once the genie’s out of the bottle, it’s really hard to contain it. It can become a terrible problem for societies,” Graves said.

Which brings to mind 1920s Europe, when the roots of authoritarian populism that led to fascist regimes in progressive democracies like Germany and Italy. Surely it can’t be a coincidence that the 1920s was also the disruptive decade of the last big energy transition (from animals and steam to the internal combustion engine and petroleum)? That transition contributed to a radical restructuring of Western societies, including the shift from an agrarian to an industrial economy, the depopulation of rural areas, and the growth of towns and cities.

Graves says hope is the only antidote to populism, but thus far hope has been in short supply. Without it, more and more Canadians will fall down that populist rabbit hole, and that is very bad news for Canada.