If Tony Seba is correct, the Texas and Alberta economies just took a metaphorical bullet to the head

Will the emerging electric vehicle “transportation as a service” business model kill the global oil industry in 10 years? Tony Seba thinks it will. The Stanford economist released a landmark study Thursday about the revolutionary changes soon to be wrought by electrification of the transportation sector.

Seba has been making the rounds of conferences for the past few years honing his argument. Policy nerds have been sharing videos of his talks as proof positive that an EV “technical disruption” – and the re-engineering of some of the 20th century’s greatest industries, like automobiles and oil – are only years away, not decades as the contrarians thought.

Now Seba has generated the math to prove his revolutionary thesis.

I addressed this in a 2016 column, arguing there are two emerging models of EV ownership, but only one could lead to rapid adoption.

If EVs compete head-to-head as a replacement for internal combustion engine cars, then there are far more constraints than accelerators to adoption. And the effect of the constraints – high cost, range anxiety, lack of choice, etc. – is much more intense.

The replacement model argued for a traditionally gradual rise up the diffusion S-curve, perhaps reaching 70 to 80 per cent marketshare in 50 years. 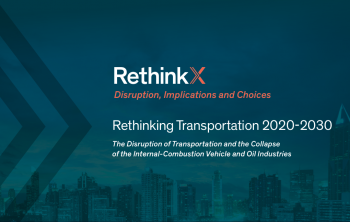 But a business model disruption – like transportation as a service – that dramatically enhances the value of EVs to consumers is another animal altogether.

In Rethinking Transportation 2020-2030: The Disruption of Transportation and the Collapse of the ICE Vehicle and Oil Industries, Seba not only explains why the new business model disruption will triumph, and how its success will be so complete that by 2030 “95 per cent of US passenger miles traveled will be served by on-demand Autonomous Electric Vehicles (A-EVs) owned by companies providing Transport as a Service (TaaS).”

“We are on the cusp of one of the fastest, deepest, most consequential disruptions of transportation in history,” the RethinkX think tank founder says in a press release. “But there is nothing magical about it. This is driven by the economics.”

Imagine the impact of these changes on related industries, as Seba did in his study.

If 70 percent fewer passenger cars and trucks are manufactured each year, global automaker supply chains will shrink to a fraction of their current size, throwing millions of out of work, with ripple effects throughout national economies.

Automakers like General Motors and Ford Co. will either become low-margin, high-volume assemblers of A-EVs or transition to becoming Transportation as a Service providers. No wonder GM invested $500 million in ride-sharing company Lyft.

And what of the mighty oil industry? The impact will be “catastrophic,” says Seba: “Global oil demand will peak at 100 million barrels per day by 2020, dropping to 70 million barrels per day by 2030. This will impact different companies and countries disproportionately — and in many cases, dramatically — depending on their exposure to high-cost oil.”

If Seba is correct, the Alberta economy just suffered a mortal blow. Northern Alberta facilities and infrastructure worth hundreds of billions could be stranded. Calgary and Edmonton will be ghost towns.

I interviewed Seba for almost an hour – it’s like drinking from a firehose. That interview will be the basis of several more columns in the next few days. Frankly, Seba’s work is so important it deserves a thorough discussion.

I also interviewed several economists and analysts about his study. They generally agree with his conclusions, though there are plenty of caveats and objections which suggest the timeline will be more like 20 or 30 years, perhaps longer.

I have my own take on Seba’s study, which I think focuses too much on the “accelerators” to technological change and not enough on the “constraints.” Constraints don’t fit neatly into an economic model because they often tend to be of a type – such as culture – that isn’t easily captured with data.

Quibbles aside, Seba’s work is seminal. It should be taken very seriously by Canadian and American corporate executives, politicians and governments, workers and their unions, and investors.

The reason? Seba has sussed out the single most important driver of rapid technical change: an exponential increase in value. People will pay more if the value they receive is significantly greater than the value created by the old technology, a lesson too often ignored by the boosters and hype cyclers of clean energy technologies.