What is the Alberta energy war room really up to? If you answered, “plagiarizing logo designs” – two in four weeks, after all – you’d be partly right. Behind the Keystone Kops of Canadian energy politics routine, however, is a coherent strategy if you look hard enough. Unfortunately, it’s just not a good one.

“Why create another propaganda machine in the first place?” I asked in an August 2 column, pointing out that industry lobby groups and industry-funded astroturf organizations already flood social media and friendly news organizations like Postmedia with aggressive, truthy but occasionally outright false advocacy.

In a recent interview, University of Calgary political scientist Melanee Thomas answered my question by suggesting that “usually, you have these propaganda initiatives to get people to comply with a position that the state knows they’re going to struggle to get support for.”

The position in question is “greenwashing,” marketing spin from an organization or company designed to present an environmentally responsible public image. What, exactly, are the oil and gas leadership and its government cheerleaders greenwashing?

The argument is that Canada is already far ahead of other hydrocarbons-producing countries in de-carbonizing production, protecting the environment, working with indigenous peoples, and operating with excellent governance. Therefore, Canada’s proper response to the climate crisis should not be punitive climate regulations but more of what Canada already does so well.

There are two key ideas in play. 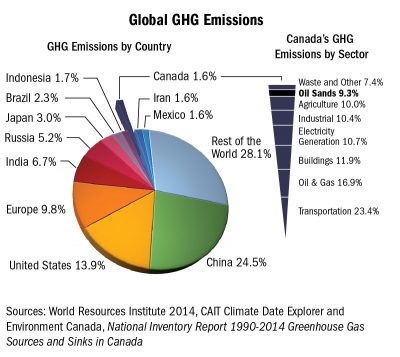 One, Canadian emissions-reducing regulations won’t accomplish much. Canada only accounts for 1.6 per cent – and the oil sands only 0.15 per cent – of global emissions. China and India are the real problems, goes the argument.

Deflecting attention from Alberta is an important part of the Centre’s job.

Two, Canadian hydrocarbons are superior to those on offer from nasty customers like Saudi Arabia, the boosters’ favourite whipping boy. Greenhouse gas emissions from natural gas production are already low and falling for crude oil. Canadian environmental protection is second to none. Canada ranks high on global indices for strong democratic institutions and the absence of corruption.

From the energy warriors’ point of view, Canada is Dudley Do-Right and tying him to the tracks of misguided climate policy plays right into the hands of Snidely Whiplash, the moustache-twirling villains in Riyadh who care not a whit for protecting the environment or lowering greenhouse gas emissions. “Blood oil,” the boosters sneer, hoping to resurrect the discredited idea first floated by alt-right rabble rouser Ezra Levant that Canadian oil is somehow “ethical.”

“The reality is that Canada has a far greater opportunity to help reduce the world’s carbon footprint by expanding the reach of its oil and gas industry than it does by keeping its vast resources in the ground,” the Canadian Energy Centre wrote in a December 31 op-ed. 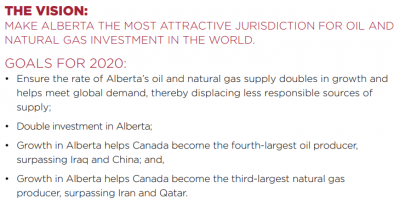 The marketing plan is contained in the CAPP “energy platform” that was released prior to the Alberta election in April. Double investment (from $20 billion) in Alberta? Double oil (from 4 million barrels per day) and gas (from 10 billion cubic feet per day) supply? Yowsers, that’s a very ambitious – CAPP calls it “aspirational” – expansion.

There’s just one hitch. Canadians have told pollsters for years that they only support further oil and gas development if governments support the transition to cleaner forms of energy like wind and solar.

So, here was the scenario confronting the industry and Jason Kenney in 2019.

They firmly believed in the most optimistic international growth “forecasts” for oil and gas consumption over the next 20 years. The federal election, in which two-thirds of voters marked their X for political parties offering beefed-up climate plans, drove home the need to convince Canadians of industry’s green credentials. Finally, the industry has some good news stories to tell – such as low-emission BC natural gas and the declining carbon-intensity of oil sands heavy crude – as a result of significant innovation in innovation and new technologies.

The solution to the big thinkers in Calgary board rooms and the Alberta Legislature was obvious: promote Canadian hydrocarbon positives as loud and as hard as possible. Ergo, create the energy war room using the pretext of fighting back against the bogeyman of “foreign-funded activism.”

Oil sands producers are decarbonizing their heavy crude because they believe that carbon pricing and other restrictive climate policies will be introduced in Asian markets over the next five to 10 years. Gas producers in NE BC are electrifying production and LNG Canada will electrify liquefaction in its $40 billion new plant in order to minimize emissions.

There are many great Canadian oil patch stories to tell. Instead of telling those stories, the decision was made to sell the sizzle instead of the steak. Instead of revamping the tired narrative of climate skepticism and opposition to climate mitigation, the big thinkers doubled down on the status quo by trying to greenwash the industry.

Canadian oil and gas is already the world’s best, is the message. Except the message isn’t true and prominent experts like economist Andrew Leach and a few news organizations like Energi Media and The Medicine Hat News have been busy poking very large holes in the Centre’s work.

What if the Centre had been given the mandate – goodness knows it’s been given enough former journalists – to do real, honest reporting, to tell the truth without greenwashing?

“We’re very good in these areas, not so good in these areas, but governments, regulators, and industry are working to be much better and here’s how they plan to accomplish that goal” is a message that would have been received so much better than plagiarized logos, incompetent media interviews, frequent errors of fact, and half-baked responses to legitimate criticisms from media.

It has been said before and it will no doubt be said many times in the near future, but the task of telling the Canadian hydrocarbon industry’s story to the world has to be put in the hands of competent communications professionals.

The greenwashing efforts of the Canadian Energy Centre are a farce.