“That kind of question in the middle of an economic crisis from a Calgary-based media outlet really frankly throws me for a loop. Sounds like you’re reporting for The Tyee or something.” – Premier Jason Kenney to Tom Ross of 660News

Welcome to Alberta’s tribal politics, where the Premier chastises a journalist for belonging to the wrong team and asking a harmless question about the energy transition, something he himself acknowledged as an issue just a few months ago. Don’t bother being outraged, folks, this is standing operating procedure in the Kenney government. 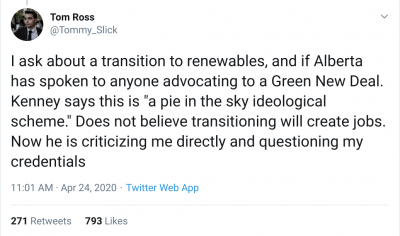 Here is the question from Tom Ross of 660News that prompted Jason Kenney’s outburst at Friday’s press conference: “With the oil and gas market taking such a hit, when do you start thinking about a full-on transition away from traditional fossil fuels? And when you’re talking to American representatives, for example, are you talking to anybody who advocates for a Green New Deal?”

No one is surprised that the query irked Canada’s leading cheerleader for the oil and gas industry. But how do we square his dressing down of Ross with his own comments from February during a panel discussion at Washington’s Wilson Center?

“Over the next decades as we go through the energy transition, we all know that there will be a continued demand for crude,” he said, as reported by the Calgary Herald. “I have a firm grasp of the obvious,” Kenney later told columnist Don Braid. “There is no reasonable person that can deny that in the decades to come we will see a gradual shift from hydrocarbon-based energy to other forms of energy.”

What reasonable Albertans will understand is that the Premier put the energy transition in play with his public comments. Ross had every right to ask the question and to expect a civil answer.

The reason he didn’t get one is that the energy transition and the Green New Deal proposed by left-leaning US Representatives had nothing to do with why Kenney impugned Ross.

Why? Because this is how United Conservative Party government press secretaries, “issues managers,” and surrogates often treat Albertans who don’t share their politics, as anyone who spends a bit of time on Twitter will soon discover.

Less than a month ago, Health Minister Tyler Shandro berated a doctor neighbour whose Facebook post he disliked in the man’s own driveway. In front of his family and other neighbours. Instead of publicly apologizing, the Minister’s press secretary released a statement rationalizing his behaviour.

Can you spot the pattern? Entitled. Nasty. Bullying. 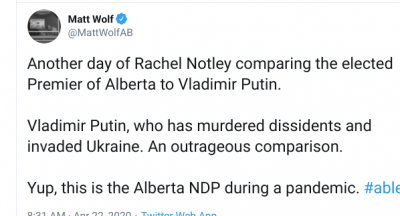 Throw in hyper-partisan and you could be describing the Twitter account of former far-rightwing Sun News executive Matt Wolf, “Executive Director of Issues Management for the Premier of Alberta,” who is often described as a $200,000 a year Twitter troll.

Or Brock Harrison, Andrew Scheer’s former communications manager who was fired a month after the disastrous CPC federal election and hired as chief of staff to Minister of Children’s Services Rebecca Schulz. Unpleasant customer, as a rule.

The Kenney government has a culture problem: it employs far too many entitled, nasty, hyperpartisan bullies. And their boss sets the tone.

This is the party that allowed the odious alt-right political activists Rebel Media to broadcast live from their victory party after winning the 2019 election.

This is the government that doesn’t take kindly to criticism from the tiny Medicine Hat News. Its response to critical columns by Scott Schmidt and Jeremy Appel was to demand rebuttal op-eds and let loose the “issues managers” on social media. When that didn’t quiet the complaining, Schmidt and Appel were given the cold shoulder.

Brian Heidecker has seen the transformation of Alberta conservativism up close and personal. A retired rancher now living in Edmonton, he has a 40-year community service pedigree, including a stint as Board Chair of the University of Alberta. He was also a confidant of Peter Lougheed, vice-president of the PC party, and a savvy election campaign manager.

What a difference a decade makes, he says. Religious social conservatives loosely allied with the hardline oil and gas crowd undermined the PCs, supported the growth of the Wildrose Party, and embraced “unite the right.” After that fait accompli, led by Kenney, moderate conservatives were purged from the new United Conservative Party.

“At the constituency level and the Provincial UCP level, all of the ‘progressives’ have been forced out,” he told Energi Media. “Unless you believe and promote the hard line on social issues and the invincibility of the oil and gas industry you become persona non grata very quickly.”

Unfortunately, Kenney has too many friends in the Alberta media like the fawning Postmedia columnists Rick Bell, Lorne Gunter, and Licia Corbella who regularly sing his praises. Corbella even held a UCP party card while she reported on Kenney’s leadership campaign – a huge no-no for journalists – a fact she withheld from the Calgary Herald.

No wonder he expected Ross to toe the line.

Journalists are not supposed to be cheerleaders for the Premier or his government or the province’s biggest industry. Yesterday, however, Kenney used the power of his office to make them feel like they should be.

That was wrong. But don’t expect this entitled, nasty, bully of a premier to backtrack or apologize.