Levant accuses AFL head of having an Ashley Madison account and a progressive blogger of planting fake offensive signs, while Bernard the Roughneck throws his shoes at the Legislature

They were so weird that the least weird thing was that the rally organizer was a supposed media organization, Rebel Media.

When I started in this business 30 years ago, political groups or activists put on rallies and news media reported on them. Now, we’re supposed to accept that Rebel Media – and its notorious “rebel commander” (who needs a staid title like publisher or managing editor anymore?) Ezra Levant – is both the subject of the news and the news reporter.

Unthinkable not that long ago, this new post-truth, fake news media model has been legitimized by the triumph of Donald Trump in the United States. The President-elect is turning the relationship between government and media on its head. Who needs media, says Trump, when you have Twitter? And who needs TV news networks when you have Steve Bannon, the godfather of online fake news at the influential alt-right Breitbart website, as the senior advisor of your incoming administration?

If you don’t like the media, make your own.

But I already said that who was behind the gathering of roughly 1,000 wasn’t nearly the weirdest thing going on at Levant’s “rally.” What was? Well, I counted five or six pretty weird things. 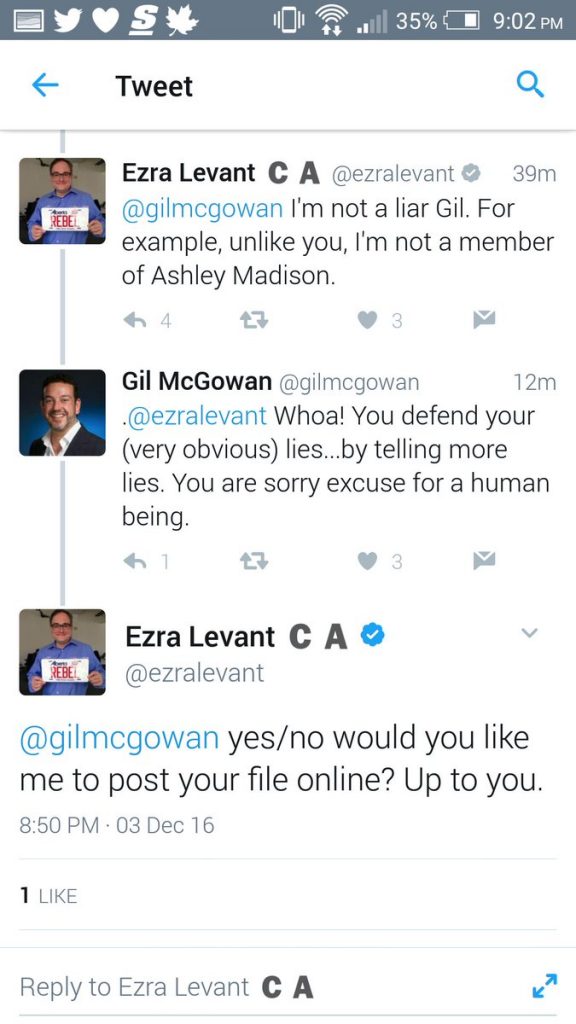 One, disagreement over the crowd count took a very strange turn on Twitter.

Gil McGowan, president of the Alberta Federation of Labour, was grinding Levant’s gears over attendee numbers, claiming the former Sun News Network “host” (he has the same rosy cheeks as Vanna White) inflated them by quite a lot. Levant claimed 3,000, media estimated 500 to 1,000.

Then an extraordinary exchange took place. Levant claimed McGowan had an Ashley Madison account, the site for cheating married adults, an apparent accusation that McGowan is an adulterer.

You can read it in the screenshot graphic on the left.

I cannot remember a single instance of a real journalist (I have argued for a long time that Levant is not a legitimate journalist, nor are most of the Rebel Media crew) threatening in a public forum to reveal personal information about a public figure.

McGowan denied having a file and dared Levant to do his worst:

.@ezralevant I have no “file.” Post whatever you like. But be prepared to face the legal consequences, you sorry excuse for a man.

@ezralevant You’ve really picked the wrong guy to mess with. If you think you can bully or blackmail me, you have another thing coming.

McGowan tweeted that he planned to consult a lawyer about Levant’s alleged “slander.”

McGowan did not respond to an interview request. Levant, however, did. But not in the way most sources reply.

Here is the email correspondence:

EL: You’re a malicious crank. You can quote me on that.
Me: I’m also a real journalist who has never been refused media accreditation and demands that you be held to the same standard. If that qualifies me as malicious, then I’ll gladly wear the label. As far as I’m concerned, you’ve declined to comment. Thank you for your response.
EL: I have not declined comment. Don’t lie. My comment is that you’re a malicious crank who rants about me on Facebook so much that I’ve blocked you.
Me: You’ve declined to be interviewed, which is what I requested. Thank you for replying.
EL: I have just done an interview with you. Your refusing to acknowledge it is more proof of your malice.
Me: I requested an phone interview in which I could ask you questions about your accusation that Gil McGowan has an Ashley Madison account. You have refused to grant the interview. That’s your right. But there has been no malice whatsoever in my request or my correspondence with you. You’re very thin-skinned to mistake my criticisms of your work for malice. Are you above criticism?

And that was the end of the emails from Levant. 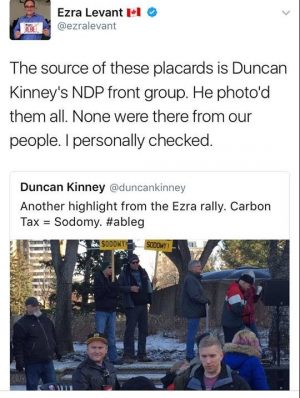 Two, the dudes with signs saying the Alberta carbon tax equals sodomy. I have no clue what those signs mean, but it must be bad because…sodomy, right?

Then it got even weirder.

Levant accused Duncan Kinney, a progressive journalist and activist, of planting the men with the signs at the rally for a photo opportunity. Kinney denied the accusation:

“This is, of course, an utter and outright fabrication. These men were at your rally for its duration,” he tweeted to Levant.

“Your assertion that they are associated with Progress Alberta [Kinney is the executive director] is an outright lie.”

Kinney would not agree to an on the record interview until he consults with his lawyer.

At this point, the only person not consulting a lawyer is me. Let’s hope I avoid the aggravation.

Bernard Hancock is an on-again, off-again oil and gas rig worker in northern Alberta. A few years ago he began showing up at anti-pipeline protests in his Nomex overalls and hardhat to annoy the eco-activists. He has an interesting look (check out the fright wig hair) and plenty of opinions, so naturally became a protege of sorts of Levant’s.

I wrote about him because he participated in a Canadian Association of Oilfield Drilling Contractors public relations campaign.

Bernard took a lot of heat for that campaign, but I was reluctant to pile on because I grew up in a blue collar town with plenty of guys just like him, guys that only wanted to work and raise their families in a decent lifestyle. In a way I get Bernard.

But Bernard jumped the shark in his speech.

At one point he asked supporters if they knew a “computer hacker” because “I know there’s a bunch of stuff they can dig up on what’s going on in that building [the Legislature]…we need their help.”

At another point in his 10-minute ramble he suddenly pulled off a shoe, turned, and threw it at the door leading into the Legislature. The he pulled off his other shoe and threw that.

I am not making this up. You can find the video on Youtube.

Four, while federal Conservative Party leadership candidate Chris Alexander was at the microphone the crowd began chanting “lock her up,” referring to Premier Notley.

The phrase has particular currency now because it was shouted frequently during the rowdy Trump campaign rallies. Trump even threatened to appoint a special prosecutor to investigate Clinton during the third presidential candidate debate.

The threat to “lock her up” is considered a part of the bullying and threats that female politicians endure these days, and it’s received plenty of criticism. The crowd, many of them Wildrose supporters (leader Brian Jean spoke at the rally), didn’t seem to care about the phrase’s notoriety, they belted it out with gusto.

Many on social media accused him of chanting along, a charge he denies.

“I could clearly hear what they were saying and I was uncomfortable,” Alexander told CBC News on Sunday.

Five, the carbon tax equals sodomy signs weren’t the only awful placards at the rally.

One sign read, “Don’t let gay activists in schools.” An anti-immigration leaflet calling for less immigration was passed out to the crowd.

How did Canadian politics become so debased?

Many of the actions described above are right out of the Trump/KellyAnne Conway/Breitbart playbook. Is Canada about to embrace the same post-truth, fake news politics as the United States, where “facts” no longer exist?

If Canada does, Ezra Levant may be the drum major at the head of the parade. And if you think things were weird at Saturday’s Rebel Media rally, just wait.