I liked when [Greta] said, “You think this is fun? No. We are striking to save the planet and it is a crisis and we need to act.” – Alan Besecker, Edmonton.

As 10,000 or more Albertans jammed the Legislature grounds Friday afternoon to hear climate activist Greta Thunberg, UCP staffers covered office windows with paper, a fitting metaphor for a government that pretends the climate crisis doesn’t exist instead of taking action. 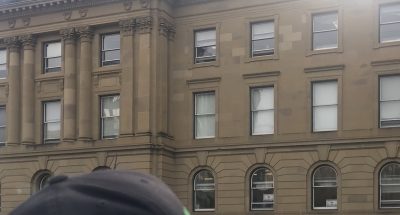 We asked Energi Media readers for their thoughts about Thunberg and the climate strike.

Covering office windows “reflected poorly on Premier Jason Kenney,” said Carol Nazaruk Marocco of Edmonton, and “showed all the young people gathered today, and the whole world that he only cares about and listens to those whose ideology aligns with his.”

Thunberg’s message was simple: governments and those in positions of authority must act because climate science tells us we must.

“We are doing this because in this crisis we will not be bystanders and we are doing it because we want the people in power to unite behind the science” she told the cheering crowd.

Her message that rich countries like Canada and Sweden have to reduce their emissions to net-zero as soon as possible to spare poorer countries, especially in the southern hemisphere, was well-received:

On January 1, 2018, [we had] 420 gigatonnes of carbon dioxide left in our C02 budget and now that number is down to less than 360 gigatonnes as we emit four to two gigatonnes of [new] CO2 every year. If you include land use add current emissions levels, that remaining CO2 budget is gone within less than eight and a half years. Again, that budgets is for a six to 7% chance of seeing below 1.5 degrees global temperature rise and avoiding the risk of setting off several irreversible chain reactions beyond human control. That would lead to enormous sufferings for countless of people, especially among indigenous communities and people in the global South.

That was the gist of Thunberg’s 12-minute address, which resonated with Energi Media readers.

“I think she’s wonderful. Welcome to Alberta Greta. I hope my daughter is as strong as you are,” Patrick O’Connor of Red Deer.

“I am very pleased that the efforts of Greta Thunberg are raising awareness, and also inspiring and encouraging young people to be involved in trying to change the world for the better,” added Mark Polushin. “Hasn’t happened since the Sixties!”

Energi Media readers who attended the rally said it was the largest they have attended in recent memory.

“This was the largest rally I have ever been to. The last [big one] was in 2000 against Bill 11 (privatization of health care),” says Albertan Rebecca Lippiatt. “It’s clear from the numbers that a lot of Albertans care an awful lot about the environment.”

Despite speculation by fake news sites like Rebel Media that Thunberg intended to interfere in the Canadian election campaign, allegations the Swedish high school student denies, she did not mention the election or partisan politics.

“I was there. I can safely say that the thousands of Greta supporters were clearly having a great time,” says Daniel Boulet. “Her message is very simple: the science of climate change is settled and there is an urgent need to deal with the problem. She made an interesting point which was that both sides share a common enemy – physics.”

John Blades of Tofield, Alberta agrees: “Many Albertans thought she was here to vilify us, to rant about the oilsands, and to tell us what bad people we are for selling oil. It didn’t happen. Unfortunately, our government and many citizens reacted as if it would and did. Not a great way to showcase ourselves to the world.”

“It’s great to see that many Albertans are rallying behind Green ideas,” added Wade Graham of Canmore. “We aren’t just oil and gas. We are just trademark conservative. Many of us deeply care about the earth and our part in the climate crisis. This was a great gathering of those folks.”

Thunberg spent time chatting and mingling with the many younger Albertans who showed up to support her.

“It was absolutely unbelievable. The number of active and engaged youth,” said Kyle Hamilton of Edmonton. “This was the first day of activism that many had ever had.  And they liked the taste. “

It was wonderful to see it was multigenerational. People with canes and walkers, people with strollers and babies. All demographics…..everyone respectful and kind,” observed Wendy Rudiger of Stony Plain, Alberta.

United We Roll promised to stage a huge counter-protest, but the group that organized the trucker convoy to Ottawa earlier could only muster a few hundred supporters.

“I was in an area where a bunch of ‘I heart Canadian Energy’ people showed up,” says Kenneth T. Williams. “They were there to say their piece with their signs. They weren’t disruptive or loud. The people there for Greta gave them room without any confrontation.”