Talk about poking holes in a narrative. A New Year’s Day poll from Abacus Data shows that a majority of Canadians want the construction of Trans Mountain Expansion pipeline to begin this year, and only slightly smaller percentage of voters think it will actually happen. 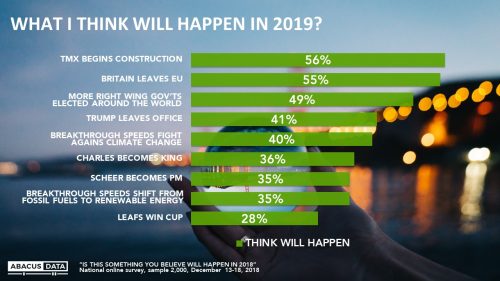 “Two out of three people hope that the year sees the renewal of construction on the TMX pipeline expansion,” Abacus principals David Coletto and Bruce Anderson say in the press release accompanying the survey.

The survey results contradict the popular sentiment that a majority of Canadians – including most British Columbians – oppose new pipelines for Alberta.

“The political rhetoric implies that large swaths of centrist, Liberal, BC or eastern voters are dug in against the TMX project but the reality in our polling tells a different story,” Coletto and Anderson write.

“A modest majority in Quebec are against the project, but everywhere else majorities support completing this pipeline. A majority of Liberal voters and half of NDP voters do as well.”

Yes, the political rhetoric at huge rallies organized by Truckers for Pipelines, for instance, where politicians from Alberta’s United Conservative Party and the Conservative Party of Canada fulminate against foreign-funded anti-pipeline activists whipping up opposition against Trans Mountain Expansion.

A dispassionate observer might almost think the rallies were organized for partisan purposes.

The survey was conducted online with 2,000 Canadians aged 18 and over from December 13 to 18. A random sample of panelists completed the survey from a set of partner panels based on the Lucid exchange platform. These partners are double opt-in survey panels, blended to manage out potential skews in the data from a single source. The margin of error for a comparable probability-based random sample of the same size is +/- 2.5%, 19 times out of 20.

“Overall, the results kind of renew faith, if people are willing to do more than just hope,” says Kevin Van Tighem of Canmore, Alberta.

A majority of the respondents (56%) think the Trans Mountain Expansion will begin construction in 2019.

Within the survey, Abacus found that an overwhelming majority of Canadians hope for a “scientific or technological breakthrough that can accelerate progress in the fight against climate change (90%) and a shift from fossil fuels to renewable energy (87%).”

Michelle Shaw of Edmonton worries that the hope for a breakthrough masks Canadian apathy towards making the personal and policy changes needed to counter global warming.

“I’m afraid ‘breakthrough’ often means ‘magic.’ In other words, the people hoping for that are sitting back, doing nothing, until some mystical piece of technology is created that makes it easy for them,” she said.

“We need to see more incentives for industries to start doing the switch over,” says Brian Wincherauk of Peace River, Alberta.

“The results to these questions reinforce our findings throughout the last couple of years on energy and climate issues – people want progress in the fight against climate change and believe in the need for a shift to renewables – but they also want Canada to participate sensibly in the energy markets that exist today, including getting more Canadian oil to new customers,” Coletto and Anderson write.

Albertan Bob Stallworthy says he is in the 90 per cent who would like to see a faster transition to renewable energy sources, but also understands the practical realities of modern living.

“I am not so naive as to think that that is going to happen without a lot of planning on the part of politicians and co-operation (acceptance) by the general population. This will take time,” he said. “In the meantime, we need to be able to continue keeping warm, cooking meals and all the things we need to do now. That means fuel.”

The Abacus poll and the comments by Energi Media readers reinforce an emerging but underappreciated consensus, one that suggests that as long as Canada is supporting the global energy transition then most Canadians will also support the development of oil and gas resources as well as the construction of energy infrastructure to get those resources to market.

Extremists from both ends of the political spectrum – industry boosters who demand pipelines now and anti-pipeline activists who insist the Trans Mountain Expansion must not be built – operate outside that consensus, and their arguments are not actually supported by Canadians.

We’ll leave the last word to reader Janice Strachan Wing of Innisfail, Alberta: “I’m pleased to see this. Social media has skewed perception and perspective on the realities of the issue as well as the responses. This poll provides balance in thinking – as well as suggested alternatives and forward thinking.”