The federal government is providing $10 billion over three years through the Canada Infrastructure Bank and most of the money is earmarked for renewable energy, zero-emission buses, and building retrofits to improve energy efficiency. If this is what a “green recovery” looks like, Prime Minister Justin Trudeau is on the right track. 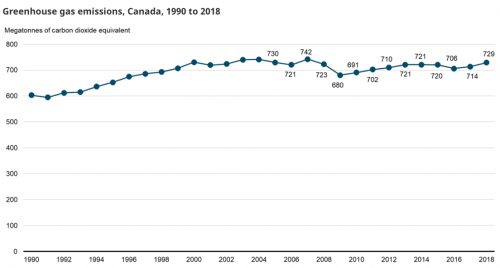 In 2018, Canada generated 729 megatonnes (Mt) per year of greenhouse gas emissions from electricity generation and distribution (64.3 Mt), transportation (185.9 Mt), buildings (92.5 Mt), and industry (386 Mt). Oil and gas production accounted for 193.2 Mt, a whopping 26.5 per cent of national emissions, and the oil sands alone account for 11 per cent. Industry is arguably the toughest to decarbonize and the hydrocarbon-producing provinces, led by Alberta, have complained loud and long about the potential negative impact of a “green recovery” approach. Expect a separate announcement for this sector, one that likely emphasizes electrification and fuel-switching to hydrogen.

An important element of this infrastructure program is how projects get financed. The Bank’s website says it has a “wide range of financial instruments” it can use, including senior debt, subordinated debt, preferred equity, equity, and structured risk positions, “depending upon the needs of a specific project or business case.”

CUTRIC (Canadian Urban Transportation Research Innovation Consortium) lobbied for two years for large-scale financial support of electric and hydrogen buses, according to CEO Josipa Petrunic. While e-buses are lower cost over the lifetime of the vehicle, municipal transit authorities don’t have the extra cash (a diesel bus is $600,000, an e-bus is $1.1 million plus charging infrastructure) in their budgets and private lenders won’t step up.

The Infrastructure Bank can fill “the gap in high-risk, high-cost projects that the country needs to reduce emissions, but which no private sector lender on its own would finance because of the complexities and the risks involved,” she told Energi Media.

Petrunic provides an example of how this might work in practice: “The bank knows that when you electrify fleets, it’s cheaper every year to operate those vehicles. However much the [transit authority] saves, that’s what it pays back. Some years it might be more money, some years it might be less money. Most financial institutions can’t do that.”

Catherine McKenna, federal infrastructure minister, said in a press release that the Infrastructure Bank will bring in “the private sector to get more infrastructure built.” How might that work in practice?

“HSBC has helped to finance electric buses in Britain,” said Petrunic. “Large construction and manufacturing firms like Siemens or SNC Lavalin have investment or finance wings that invest in complicated projects in sectors where they specialize.”

The federal government backstop is what makes the private investment possible, she adds.

On the face of it, investing in renewable power is about displacing coal-fired plants in Alberta, Saskatchewan, and New Brunswick that comprise the 23 per cent of Canadian electricity generation that isn’t already low-emitting (60% hydro, 17% nuclear). In reality, the situation is much more complex.

Federal and provincial climate policies rely heavily upon the electrification of transportation, buildings, and industry to reduce emissions. Where is all that extra power coming from?

My September 29 column discussed how British Columbia might generate the 26,000 megawatt-hours of electricity needed to achieve CleanBC (the NDP government’s climate plan) 2030 emission reduction targets. This a 50 per cent increase in provincial power supply, the equivalent to five new Site C dams, in less than a decade. Just developing enough wind and solar farms to supply the power is a Herculean task likely costing tens of billions.

Laureen Whyte, CEO of Clean Energy BC, thinks her members should lead the private sector investment in renewables: “The federal support for renewable energy is timely for BC independent power producers. IPPs, especially First Nations, are ideally positioned to build the necessary wind, solar, small hydro, and biomass facilities.”

Now include building out the transmission and distribution capability to get the power where it will be consumed. For this issue, finding the money is the least of BC’s problem.

BC Hydro controls the power grid. It is an old-fashioned, cost-of-service utility in an age where changing technology is forcing utilities across North America to re-engineer their business models. Where Alberta and Ontario began reforming their provincial power systems over a decade ago and now have an independent system operator, multiple utilities, and wholesale electricity markets, stodgy BC has doubled down on the public-ownership model.

Just as a robust power system is needed to meet the challenges of climate change and the energy transition, BC Hydro is in financial trouble, has no experience developing wind and solar resources, and appears to be uninterested in reform. “I spoke at a BC hydro event several years ago,” said utility expert Peter Asmus, who leads Guidehouse Insights’ microgrids solutions. “I have to admit, I was taken back by what seemed like old-fashioned thinking.”

Change has to start somewhere. If federal cash kickstarts that change in BC, then it will have performed a valuable service. If it doesn’t, then Alberta may be the biggest beneficiary of the Infrastructure Bank program.

According to the CBC, Norwegian consultancy Rystad Energy thinks Alberta could become the Canadian wind and solar leader as early as 2025, forecasting that 83 per cent of the utility-scale wind and solar capacity developed over the next five years will be in the Wildrose province.

Devil is in the details

“There’s a handful of agencies that are ready to potentially start using this type of financing very soon,” Petrunic says of the e-bus part of the program. “The devil’s in the details, but I have no doubt the Infrastructure Bank has done the right kind of consultation and planning to be able to design a program that would work for cities.”

Let’s hope this holds true. The 2020s promise to be a turbulent, disruptive decade in which competition intensifies within important emerging sectors like renewables, electric vehicles, and battery storage. Canadians must recognize that the United States, the European Union, and China are pouring vast sums into these sectors. Ten billion dollars is a drop in the bucket, but it’s the price Canada has to pay to remain competitive.

By 2030 we should have a pretty good idea of who are the winners and losers of the energy transition. Canada has a decade to ensure it isn’t one of the losers. Trudeau’s infrastructure plan holds promise to help Canada be a winner, now let’s hope the money is spent wisely and achieves the government’s objectives.