What is Jason Kenney up to with Thursday’s sarcasm-laced letter to Amnesty International? The same thing he’s been up to since he turned his attention to provincial politics: burnishing his populist narrative. From this point of view, Monday’s Amnesty missive was a political gift for the Alberta premier. Don’t be surprised, though, if this turns out to be the apex of the “foreign-funded activist” narrative.

Alex Neve wrote an open letter criticizing the UCP’s “Fight Back Strategy,” the much-mocked “energy war room,” and the public inquiry into foreign funding of anti-oil sands/pipeline activists. His main point was that Kenney’s bellicose language “feeds into a worsening climate of hostility towards human rights defenders – particularly Indigenous, women, and environmental human rights defenders – exposing them to intimidation and threats, including threats of violence.”

Neve’s perfectly reasonable argument plays well outside Alberta. Kenney’s angry narrative in defence of the oil and gas industry status quo – we produce the most ethical and environmentally responsible oil and gas on the planet, just ask us! – does not.

But Kenney is not the premier of the rest of Canada and his narrative plays really well to his tribe of angry, frustrated Albertans who feel cheated out of the post-2017 oil and gas recovery they mostly missed. The cheering will be equally loud in the Calgary Petroleum Club and Red Deer’s Tim Hortons.

That’s the entire point of the letter.

Populist politicians appeal to an electorate that feels under siege from a perceived existential threat. Continually whipping those voters into a frothing rage is an essential part of the populist playbook, as even a casual acquaintance with Donald Trump’s politics makes plain. 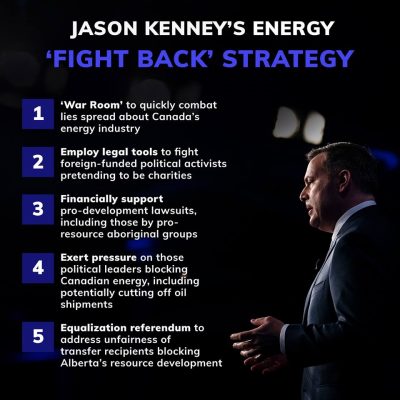 In fairness to Kenney, he makes some valid points. The industry’s efforts to build bridges with Alberta First Nations and indigenous communities is a story not well appreciated in other parts of Canada, nor is the commitment to boost aboriginal suppliers and employment. Similarly, the UCP government’s $1 billion commitment to creating the Alberta Indigenous Opportunities Corporation, which will help First Nations invest in oil and gas projects, is a laudable initiative.

Most of the Premier’s letter, however, is his standard “push back” talking points, many of which are either false or misleading.

For instance, his claim that activists are responsible for “tens of billions of dollars in lost investment and thousands of lost jobs” is pure political theatre. The Canadian Association of Petroleum Producers makes the same claim. When presented with contradictory data and pressed by Energi Media to explain the link between anti-pipeline activism and lost investment and jobs, CAPP refused to comment.

Then there is the repetition of Vancouver blogger Vivian Krause’s claims about American charities initiating the Tar Sands Campaign to landlock Alberta oil that Energi Media thoroughly debunked. “Today, you are fighting on the side of foreign billionaires trying to shut down an industry on which hundreds of thousands of hard-working men and women depend,” Kenney writes. “Forgive me if I express a concern of my own: that Amnesty International may have drifted somewhat from its core mission.”

This is classic populist rhetoric. Who really believes that Alberta oil and gas companies with market valuations in the tens of billions are actually threatened by American billionaires? Plenty of Albertans, judging by the 55 per cent who voted for the United Conservative Party on April 16, and that’s all one needs to explain why Kenney returns again and again to the foreign-funded activist trope.

His problem is that the trope is falling apart.

In Tuesday’s column, I warned that the Allan inquiry will have a difficult time obtaining information; neither the American foundations nor the Canadian environmental groups have any incentive to cooperate and the Calgary forensic auditor has no authority to compel them to do so. Hard to imagine how he will investigate charities and non-profit organizations with no testimony or paper trail.

In a Friday National Observer piece, lawyer and former Crown prosecutor Sandy Garassino adds additional context to Neve’s letter, and sets the stage for a bombshell: “That’s because just about everything you think you know about the entire foreign funding conspiracy theory is false and misleading. The whole thing is a house of cards. Next column, we start pulling them out, beginning at the bottom.”

Energi Media has been busy the past few months interviewing sources for deep dives that will debunk Krause’s conspiracy narratives about the Great Bear Rainforest as a “green trade barrier” to Alberta oil exports and her claims about corruption in the Canada Revenue Agency over audits of Canadian charities funding environmental groups. Thus far, the conspiracies don’t fare well under scrutiny.

The evidence against the foreign-funded activist conspiracy is growing quickly and there is a very good chance we will look back on Kenney’s spat with Amnesty International as the beginning of the end for it.