The Alberta oil and gas industry has a fundamental strategy problem: it’s misaligned with the major energy trends of the modern era, the transition from fossil fuels to clean energy and the climate crisis. The cause of the misalignment? Calgary office towers are seized with a backward-looking groupthink fixated on profiting from Asian economic growth at all costs. “Just get out of our way!” is their rallying cry. Well, that way lies utter failure.

Thursday’s column introduced energy apologetics, the idea that an “informed rational discussion” with Canadians will somehow persuade opponents like anti-pipeline activists and supposedly obstructive federal politicians to support Alberta’s ambitions. The purpose of theological apologetics is to proselytize, to persuade and convert the non-believer. The objective of energy apologetics is similar, to recruit supporters of oil and gas supply growth and the construction of more pipelines.

Oil companies are run by engineers and energy apologetics is an engineer’s approach to political strategy and communications: once Canadians have the right facts and data they’ll be persuaded of the need for more pipelines and hop right onto the industry bandwagon.

This is a disastrous strategy, doomed to crash and burn, and constitutes a leadership crisis within the industry.

Why? Because, according to public opinion surveys, a majority of Canadians are concerned about climate change and global warming, are on board with the transition to electricity generated by low-carbon technologies (wind and solar, for example), and only support more oil and gas development if their governments enact policies that speed up the energy transition and reduce emissions. 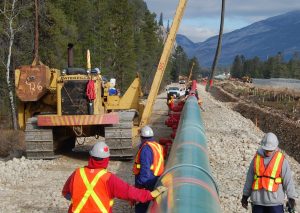 This is the grand bargain, the deal on offer to the Alberta oil and gas industry. If industry leaders can craft a strategy consistent with that deal, one that gets them what they want – more production and access to tidewater on the West Coast – while reassuring Canadians, then there is hope yet for Alberta ambitions.

Thus far, industry leaders have failed. Badly. They have some great stories, but the narrative they have woven from them would be right at home in 1950s Texas. Or the Trump Whitehouse, to which many Alberta oilmen look to for inspiration.

Professor Monica Gattinger calls this narrative “Canadian energy in the world,” an “opportunity-based vision” that believes Canadian oil and gas is uniquely positioned, because of its high environmental standards and falling greenhouse gas emissions, to exploit growing markets in China and India over the next two to three decades. Canadian CEOs have long coveted the type of growth enjoyed by American shale producers, who took US oil production from five million barrels per day in 2008 to 12 million barrels per day in 2019, upending global markets in the process.

But there is one crucial difference between Canada and the United States: most of the American growth has come from Texas, which has 590 kilometres of Gulf Coast and doesn’t need federal approval for new pipelines, while Alberta is landlocked, has to cross at least one provincial boundary to reach tidewater, and inter-provincial pipelines are subject to federal environmental assessments and regulation.

Simply put, Texas can thumb its nose at other states while Alberta has to curry favour with neighbouring provinces. Pipeline politics really matter in Canada.

Eventually, the old oil patch won the internecine civil war with the progressive camp and changed direction. No more appeasement was the new rallying cry, summed up perfectly in Jason Kenney’s “fight back strategy.” 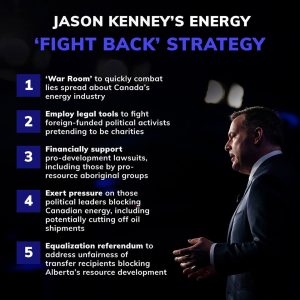 The new strategy is to bully – sorry, “advocate for your industry” – other provinces and opponents into submission. Energy apologetics is the new playbook.

This approach only works if enough Canadians can be persuaded by the industry’s version of a “rational discussion.” What are the odds of that happening? Slim to none and Slim is playing for the Vancouver Canucks.

A 2018 opinion poll by Abacus Data for the Ecofiscal Commission provided wide-ranging insights into how Canadians think about oil, gas, pipelines, and climate. On every measure, Alberta has the highest percentage of climate skeptics and deniers, while British Columbia competes with Quebec and the Maritimes for the lowest. Not surprisingly, hydrocarbon support is clustered on the Prairies and lower on the West Coast and east of Manitoba.

Recent polls suggest extreme weather events have further boosted concern about climate change and support for government action – including transitioning off fossil fuels – to combat it.

There is just no evidence in the polling data that indicates Canadians can be persuaded to back a worldview like Slubicki’s by a rational or any other kind of discussion. The political gulf between Alberta (and to a lesser extent Saskatchewan) and the rest of Canada is just too great to be bridged by energy apologetics.

But let’s imagine for a moment that Canadians could be persuaded. Would the rational discussion not have to take place in a forum outside Alberta? Where is that forum? Media interviews? Advertising campaigns? Public meetings in hotbeds of opposition, like the lower mainland of BC?

Oil CEOs and their lobby groups have never shown interest in talking to ordinary Canadians. They talk to politicians and governments, business groups, but not citizens. “We have not engaged the community in a way that they understand the value of what we do and what we bring to their lives,” Chris Bloomer, head of the pipeline trade association, told Energi Media earlier this year. “We have not had a consistent presence in the messaging over the long-term and we need to reconsider how we do that as an industry.”

No, this is just Albertans talking to Albertans, industry evangelists preaching to the choir in the same old church. Forget taking a tent revival on the road, judging by the industry’s track record it will never happen.

When Slubicki and other CEOs, accompanied by lobby groups like the Canadian Association of Petroleum Producers, head to British Columbia and Ontario and even Quebec – especially the Montreal region, where pipeline opposition is fierce – for real conversations with ordinary Canadians about the future of hydrocarbon production in this country, as well as the energy transition and climate policy, then we’ll buy their line about wanting a rational discussion.

It is time for industry leaders to stop blaming foreign-funded activists and federal politicians – read, Justin Trudeau and the Liberals – and accept their share of the responsibility for the mess in which they find themselves. Once they do, then they need to step up and provide the leadership needed to realign the industry’s go forward strategy with global market trends and Canadian public opinion.

Continued failure to do so – almost guaranteed by the energy apologetics approach – will result in the consequences the CEOs most fear. It will be their own fault.