When Canadians talk about energy issues, it often resembles an old school hockey game – elbows up, fists flying – more than a polite discussion over a double double. The debate is “polarized,” according to critics, who think that citizens must stop talking past each other and end the blame game. Canada, unfortunately, may not have time to reform public discourse around energy. 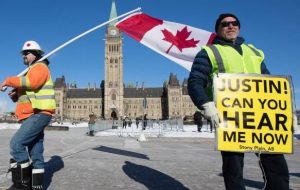 A recent Edmonton Journal op-ed by Tanya Doran, Meilissa Easton, and Gareth Thomson argues that in Alberta the debate is “reverting to the level of pre-literate kindergarten kids,” with the climate and oil/gas camps shouting incoherent slogans at each other while the majority in the middle tune out the name-calling. They call for more critical thinking, better listening, avoiding stereotypes, and “working to create innovative solutions.”

“The world is changing, and we have to change with it,” they write. “We need to depolarize the energy/climate conversation, and soon.”

Plenty of good advice here. If we’re going to have a conversation about the future of energy in Canada, being civil seems to be the least Canadians can aspire to.

Monica Gattinger also has some ideas about how to proceed. She is an energy policy expert and executive director of Positive Energy, a think tank associated with the Univerity of Ottawa, and she has written extensively about Canada’s polarized energy debate. Watch her Energi Media video interview here.

“How to get out of this mess?” she asks. Her answer comes in three parts: one, decision-makers and influencers must recognize that Canada has a problem talking about energy; two, use more inclusive language and trusted sources of information; three, if the discussion currently occurs mostly between “elites,” then find ways to move it out to the general public.

More good advice. And Gattinger can back it up. Her organization recently undertook a comprehensive public opinion survey with pollster Nik Nanos about national attitudes toward energy and found that Canadians across the country are much less divided and polarized then we might think.

Gattinger, Doran, Easton, and Thomson aren’t wrong. Their arguments are insightful, timely, and if they could be put into action they would no doubt improve the national energy conversation.

Can they be implemented? As an energy journalist, commentator, and public speaker who participates in that conversation daily, I don’t think so.

Division and conflict are a feature, not a bug, of the new global energy reality, whose defining characteristic is wrenching structural change.

When we say the world is changing, as the writers above do, what we really mean is that the global energy system is being transformed by new technologies and climate science has finally motivated world leaders to take action against global warming.

Transitioning from fossil fuels to electricity generated by low-carbon technologies like wind and solar – essentially, humans are electrifying the global economy – and implementing restrictive climate policies in a relatively short time is by its very nature enormously disruptive.

Is it surprising that blood pressure spikes in Calgary oil and gas boardrooms when environmental groups talk about stopping oil sands expansion now, then phasing them out by 2030? Vancouver has a similar reaction when the IPCC issues another gloomy view of the climate future and some Alberta industry leaders respond by denying climate change.

Buckle up because the energy transition is moving faster than imagined even a few years ago.

For example, a new study from the Rocky Mountain Institute shows that Lithium-ion battery costs fell far faster than expected over the past few years and new technologies will become available sometime in the next decade that could halve costs yet again. EVs will be cheaper than internal combustion engine cars, large electric work vehicles like freight trucks become economic, and cheap storage will make renewables and batteries far cheaper than natural gas power plants.

Rapid innovation has “unleashed massive investments in the advanced battery technology ecosystem. These investments will push both Li-ion and new battery technologies across competitive thresholds for new applications more quickly than anticipated,” the report says. “This, in turn, will reduce the costs of decarbonization in key sectors and speed the global energy transition beyond the expectations of mainstream global energy models.”

If this prediction comes true, then greater uncertainty and volatility seem certain over the near to medium-term.

Is civilized discourse even possible within that scenario? Given the climate imperative, does Canada have enough time to deliberately change the tenor of its energy conversation?

Probably not, on both counts.

What, then, should Canada do? That will be the subject of part two of this column.