All 1.1 million b/d of Energy East capacity was legally committed to by oil producers for 20 years – that is the business case

Justin Trudeau did something unusual Saturday, speaking directly to Canadians about a contentious and current political issue – TransCanada’s decision to cancel it’s $12.4 billion Energy East pipeline project – via a Facebook note, without the filter of the news media. Unfortunately for voters, much of what he wrote about the company’s decision and his government’s regulatory process was egregiously disingenuous.

The first is arguing that the Calgary-based pipeline giant backed out of Energy East, swallowing a $1 billion charge spent over the past four years, solely because oil industry economics have changed.

“Energy East was conceived at a time when the global supply of crude was relatively tight, and practical alternatives for shipping Canadian heavy oil to global markets were few,” he said, adding that since then prices have plummeted and “other pipelines are now in the works. TransCanada is a private company. Its directors are entitled to make decisions for their business based on market forces.”

As distinguished economist Robert Mansell explained in my Thursday column, pipeline companies don’t decide to build (or not build) infrastructure intended to last 30 to 50 years based upon the price of oil today, next month, or next year.

But there’s an even more fundamental issue at play here, according to former TransCanada VP Dennis McConaghy, who oversaw the Keystone XL project.

The most important questions involve Alberta oil producers, particularly in the oil sands, which will be responsible for all of the 1.3 million b/d expansion in Canada’s oil supply to 2030, according to the Canadian Association of Petroleum Producers.

Do producers believe they will be able to pump or mine enough oil to fill up Energy East over the course of its lifetime? This is why TransCanada requires shippers to commit to long-term 20-year contracts before a final investment decision is made.

The author of Dysfunction — Canada after Keystone XL says the Energy East pipeline project was “contractually configured consistent with traditional practice” between pipeline owners and their shipppers.

“In this case TransCanada had in place prior to pursuing regulatory approval sufficient -long term shipping agreements to justify on a risk-adjusted basis its investment in the project,” McConaghy said in an email.

“Those contracts obliged the shippers to pay for using the pipeline to transport their oil to the available delivery points. If those shippers did not ship their oil, they were still obliged to pay for the fixed costs for their share of the capacity of the pipeline.”

To the best of McConaghy’s knowledge, Energy East’s 1.1 million b/d were fully committed, which he says allows the TransCanada to enjoy the best financing available.

“The term of these arrangements is essentially over the economic life of the asset, usually no less than twenty years in duration,” he said.

“The shippers must internalize before entering into such arrangements that the value of the asset to be shipped on the pipeline will be sufficiently ‘in the money’ over its term.”

What McConaghy means is that some of the risk around Energy is assumed by the oil producers, who must pay the shipping tolls whether prices are high enough to be profitable or not.

“Finally, the pipeline company must be sure that the counter-parties [oil companies] it is contracting with are sufficiently credit-worthy and the under-lying economics of the commodity shipped are robust long-term as part of the due diligence of their project development.”

In other words, if this is true – and thus far TransCanada is not speaking to reporters about Energy East – then Trudeau is dead wrong about “market forces” killing the pipeline project.

Market forces are irrelevant if the company has 20-year contracts that generate revenue regardless of the ups and downs of prices.

What are the odds that Canadian oil companies will be competitive – and in business – in five or 10 or 20 years?

As I’ve reported in many columns, the oil sands sector is busy driving down its production costs by $10 to $15 a barrel, which would make its crude competitive even in the carbon-constrained, “lower for longer” price environment industry is preparing for. And oil company marketing departments love the idea of “optionality,” the ability to access different international markets rather than being tied down to the Americans – especially with protectionist (and unpredictable) President Donald Trump rattling the NAFTA trade sabre.

The second specious comment by the Prime Minister is that, “As liberals, we hold that a clear, transparent regulatory process is key to the success of major resource projects. But to attribute the cancellation of Energy East to federal regulation – good, bad or indifferent – ignores the obvious [Trudeau approving two pipelines a year ago and standing behind the revival of Keystone XL].”

The problem here is that the Liberal government is “modernizing” the National Energy Board and doing a terrible job of it, from the industry point of view.

That view has merit.

Take the recent inclusion by the NEB of downstream emissions as part of the Energy East review.

Pundits and the public have a hard time understanding why this was cited by TransCanada as the “straw that broke the camel’s back,” in McConaghy’s words. 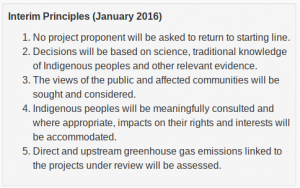 Typically, the government only assesses GHG emissions associated with the construction of a pipeline.

When the Liberals were elected, they published a list of five interim principles in Jan. 2016 that would guide pipeline reviews going forward. One of them was assessing upstream (extraction process) emissions, which was new, but not unprecedented because the US State Department had considered Keystone XL’s upstream emissions in its final 2015 report and recommended approving the project.

To make sure upstream emissions assessments were clear and transparent, the NEB and Minister Catherine McKenna’s Environment and Climate Change Canada entered into a detailed Memorandum of Understanding that laid out principles, objectives, deliverables, and timelines.

TransCanada would know exactly where it stood. (As an aside, pipeline executives highly value clear process and certainty before they invest billions in a project. This point can’t be stressed enough if readers want to understand TransCanada’s Energy East decision)

There was no MOU for downstream emissions.

In fact, the NEB simply amended the list of issues that would be reviewed and included downstream emissions, catching the company by surprise.

“A single pipeline or supply source is not going to create global crude oil demand or even Canadian domestic crude oil demand. So there are no incremental downstream emissions to ever attribute,” he said.

How do you hold TransCanada responsible for emissions created by refineries and automobile drivers in other countries?

Or is the issue the economic viability (which the NEB is mandated to assess) of Energy East compromised by anticipated carbon policies in export markets, as economist Kent Fellows argues?

Maybe it’s both? Or maybe it’s neither?

We don’t know and it appears TransCanada didn’t know, either.

Mansell told me in an interview that it could be years just sorting out this issue, as TransCanada alluded to in its Oct. 5 letter to the NEB withdrawing the Energy East application.

Finally, there is the issue of public participation, which opponents of West Coast projects Northern Gateway and Trans Mountain Expansion used to great effect as part of their campaign to stop both pipelines. They overwhelmed the NEB process (e.g. numerous intervenor requests) and basically broke it, which was the point of the exercise.

From industry’s point of view, this was a key point. No proponent wanted to repeat that lengthy, costly, and exhaustive process (keep in mind that the Energy East project was formally proposed in 2013 and the NEB public review still isn’t underway).

The panel reported in May and did a very good job of splitting the baby.

And industry would get a three year review timeline. The first year would include extensive consultations with all Canadians (this point was emphasized) and discussion of policy issues (e.g. Canada’s carbon pricing and GHG emission reducing strategies), followed by a federal cabinet decision if the project was or was not in the “national interest.”

If the answer was positive for the proponent, then a two-year technical review followed. The review would still include public and stakeholder input, but would be far more restrictive than previously.

This was a very good compromise.

Industry would no longer be required to spend hundreds of millions and the better part of a decade holding its breath, wondering if a project would be cancelled for political reasons (all projects require cabinet approval before proceeding), which is arguably why Enbridge’s Northern Gateway was rejected by the federal cabinet.

Then the Trudeau Government followed up with a discussion paper in June that borrowed heavily from the expert panel recommendations on public and indigenous participation, but the three-year timeline was nowhere to be found. In fact, instead of reflecting the reasonable middle ground of the panel report, the paper was weighted almost entirely in favour of groups and indigenous communities opposed to pipelines.

The only reasonable conclusion for TransCanada is that it would be subjected to the same cumbersome and painful process Kinder Morgan and Enbridge endured, but made worse (from its point of view) by new rights enjoyed by its opponents.

“Carr , Trudeau, and [Secretary to the PM Gerald] Butts are utterly indifferent to actually fixing the Canadian regulatory process to make it functional again for any private sector capital,” said McConaghy. “Never again will private capital risk this kind of money when a regulatory process is this uncertain.”

Is Trudeau lying about a poor business case being the cause of Energy East’s cancellation? Is he misleading Canadians about the federal government’s regulatory regime?

The facts to date don’t favour the Prime Minister.