“They [energy companies] are operating at a much more efficient and effective rate…We don’t see them as the big job creators that they have been in the past.” – Mary Moran, former CEO, Calgary Economic Development

Husky Energy booked $233 million from Jason Kenney’s supposedly job-creating corporate tax cut, then laid off dozens or hundreds depending upon the news story. Why is a highly profitable company shedding workers? Is this an industry trend? 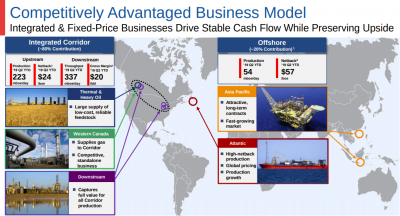 “Husky has been taking steps to better align the organization and workforce with our capital plan and strategy,” is how the oil and gas giant explained employee layoffs last week in an email to Energi Media. “These changes put Husky in the best position to achieve its goals. This was about changing the way we approach our business, the way we make decisions and the way we work together to meet our goals.

Husky’s 5-year strategy and capital plan are laid out in its September investor presentation and can be summarized as boosting production (from just under 300,000 barrel of oil equivalent per day to 400,000 boe/d), reducing annual capital spending from $3.3 billion to $2.8 billion, and boosting annual free cash flow from about $800 million to just under $3 billion. These forecasts are based upon $60/b West Texas Intermediate, which has been hovering in the low-$50 range and is expected to be lower over the next year or two as global economic growth softens.

Spending $500 million a year less to increase output by over 30 per cent while earning a lot more for investors seems like a tall order. How is Husky likely to achieve its goal?

In part by adopting new digital technologies like artificial intelligence, automation, and blockchain to reduce costs and boost productivity. The company has formed an innovation group headed by Jason Hinchliff, a former Blackberry engineer, whose job is to disrupt the existing business model with new ideas and technologies that improve operational performance, including raising productivity so the company can do more with less.

“I’m building long-term road maps that help us do business differently,” he told me in an interview for my book, The New Alberta Advantage: Technology, policy, and the future of the oil sands. An example is teaching Husky employees new data science and machine learning tools so that they can automate their own workflows, reducing repetitive tasks.

The impact on work can be material, says Roland Labuhn, the Calgary-based digital and analytics lead for Deloitte.

“I’ll pick on engineers. We’re seeing potential impacts from automation, broadly defined, of 30% to 50%,” he said. “These are white-collar jobs most people might think wouldn’t be affected by the new digital technologies.”

The internet and innovations like cloud storage have enabled companies to source technical services in other countries where wages for well-educated and highly trained professionals are much lower than in Alberta, according to Labuhn.

“If you look at what the EPC [engineering, procurement, construction] firms are doing, some of that white-collar work goes to another jurisdiction,” he said. “The nature of the work is changing.”

Canadians might be shocked at the type of jobs being automated or outsourced offshore, according to Professor Ramanan Krishnamoori, chief energy officer for the University of Houston.

“In many of the energy companies we’re starting to see the number of lawyers dropping significantly because you’re starting to see law jobs outsourced to countries like India,” he told Energi Media. “Human resources, economic modelling, back-office operations, etc.”

In 2019 alone, the Canadian oil and gas workforce shrank by 11,440 jobs, 11,100 of them in Alberta (7.5 per cent of the provincial oilfield labour force). Earlier this year, PetroLMI told Energi Media that 12,000 oil and gas positions would disappear in 2019 and that forecast now appears to be conservative.

In fact, the trend may well intensify as the global economy slows and oil prices weaken while Canadian natural prices remain perilously low. Add low prices to a full pipeline system that forced the Alberta government to curtail oil production by 325,000 barrels per day and the stage is set for several more years, at least, of constrained investment.

Albertans shouldn’t expect market access problems to be resolved any time soon. After permitting delays, Line 3 is expected to be in service later in 2020, Keystone XL may be in service by 2021 but still faces American legal challenges, and Trans Mountain Expansion won’t be finished construction until 2022.

Even if oil prices recover and market access improves in a year or two, oil patch employment still may not rebound because producers are also determined to drive down operating costs. Husky, for example, is forecasting a drop in operating costs from $37 per barrel this year to $28 per barrel by 2023. Innovation and new technologies that increase labour productivity will almost certainly be part of driving down both oil sands and conventional oil and gas costs.

“We will not be sharing the number of jobs affected,” Husky said in its email. If a reporter hadn’t bumped into a departing Husky employee, we might not have known any jobs were affected.

At what point do the oil and gas producing provinces – especially Alberta – have a frank conversation about how changes to technology and markets are destroying jobs and transforming the nature of oil patch work?