A Friday tweet from energy reporter Shawn McCarthy pulled back the curtain a bit on Premier Jason Kenney’s off-the-record view of climate change: “investor concerns about climate risk are ‘flavour of the month’…” he is reported to have told the Globe and Mail’s editorial board. There are two big problems with Kenney’s point of view. 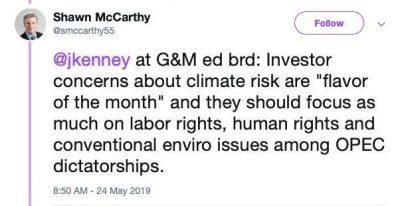 The first is that it seriously underestimates the degree to which the international oil companies and the Alberta oil sands producers have integrated carbon risk management into their corporate strategies. The idea of carbon risk permeates their corporate culture from the board of directors right down to the field operations. Some of the super-majors, like Royal Dutch Shell, are transforming their business model by pivoting to lower-carbon forms of energy like natural gas and electricity generated by wind and solar.

Last fall I interviewed Arlene Strom, Suncor’s senior vice-president and general counsel, for my book The New Alberta Advantage: Technology, Policy, and the Future of the Oil Sands. She told me a story about how at the company’s 2016 annual general meeting an investor proposed Suncor put out a climate report that details how one of the largest heavy oil producers’ strategy to be profitable in a low-carbon future.

“Over the last number of years we have increasingly had investors talking to us about a broad range of environmental, social and governance matters,” she said. “We released our first carbon risk report in 2017, and updated it again this year. We had very positive feedback from investors about that report.”

Carbon is now designated as a “material risk,” which means that it “gets discussed at the most senior level of our organization including the board on a regular basis,” according to Strom.

The other four big oil sands producers – CNRL, Cenovus, Husky, Imperial Oil – are all managing carbon risk in more or less the same fashion. They are attuned to the global trends affecting their heavy crude oil markets and the requirements of Wall St. and Bay St. Former Alberta deputy minister of climate change Eric Denhoff wrote two inightful op-eds for Energi Media (here and here) about his meetings with a New York investment house and European investors that demonstrate just how seriously capital takes carbon risk. 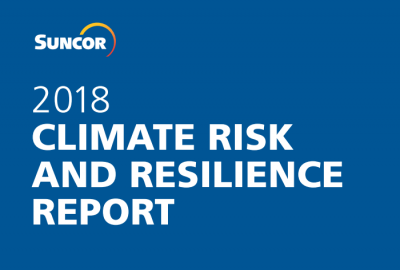 Much of the capital that drives oil and gas growth comes from outside the province and Alberta cannot afford to be offside with investors. The Big 5 oil producers account for 67 per cent of all the crude oil produced in Alberta. Carbon risk is not a flavour of the month, it is the new market reality they manage to maximize shareholder value over the long-term.

The second problem with Kenney’s comments are found in the last part of McCarthy’s tweet: that investors should pay as much attention to “human rights and conventional enviro issues among OPEC dictatorships.” That’s a direct shot at Saudi Arabia, which accounts for about 15 per cent of Eastern Canadian crude oil imports and is the new whipping boy for Canadian conservatives. They have revived the discredited “ethical oil” trope – that Canadian oil is produced at the highest environmental standards due to our already stringent regulations and that crude from many of Canada’s competitors is essentially “blood oil.”

Unfortunately for the “ethical oil” proponents, not a single drop of oil has ever been sold in global markets because it was produced in countries with better records on human rights or environmental protection. Crude oil is sold on price. Full stop.

The “ethical oil” argument should be seen for what it really is, a ham-fisted sleight of hand to deflect the focus from Alberta’s real environmental issues (for instance, 1.3 trillion litres of oil sands tailings sitting in 37 huge ponds and the inherently high carbon-intensity of oil sands bitumen). After tall, why should Canadian producers be saddled with the high cost of complying with carbon taxes, the forthcoming federal clean fuel standard, or a more obstructionist environmental assessment process if their competitors are not held to the same high standards?

This race to the bottom approach is best illustrated by the Canadian Association of Petroleum Producers, which has become the principal industry mouthpiece advocating carbon and environmental policies more in line with Donald Trump’s America.

The oil sands producers, on the other hand, see climate and carbon policy as part of their strategy to gain a foothold in Asian markets over the next decade or two, a competitive advantage that other heavy crude oil countries like Venezuela and Mexico don’t have. Professor Harry Vredenburg has been the Suncor Chair of Energy at the Haskayne School of Business in Calgary for the past 20 years. He often sits across the board table from Suncor senior management to discuss greenhouse gas emissions and strategies for reducing the carbon-intensity of the company’s output.

“To be an international player, we have to have lower emissions and low costs, and that’s very much the strategy of the oil sands,” he said in an interview.

Premier Kenney is on the record of noting being a fan of Alberta’s largest oil companies. He’s called them out publicly in the past for supporting Rachel Notley’s Climate Leadership Plan. But this is no time for blind adherence to ideology to trump the needs of the titans of the Alberta oil patch.

Or perhaps the Premier just doesn’t understand this issue? If that’s the case, he needs to get up to speed in a hurry.

Alberta can’t afford for a rookie premier to get it wrong on an issue that could significantly affect its biggest job creators from accessing the capital it so desperately needs.