Despite demand fluctuations, Wood Mackenzie says the global supply chain of wind turbines will spend approximately $600 billion by the end of 2028.

According to new analysis the energy consultancy group, annual average wind turbine supply is forecast to hit $60 billion between 2020 and 2028, which is an increase of 8 per cent compared to 2019.

Higher than average prices for wind turbines and a 20 per cent growth in offshore demand reflect a 37 per cent uptick in supply chain potential.  This represents a cumulative value of $222 billion by 2028. Strategic capital components, such as blades and towers, present a $25 billion cumulative opportunity, separately. 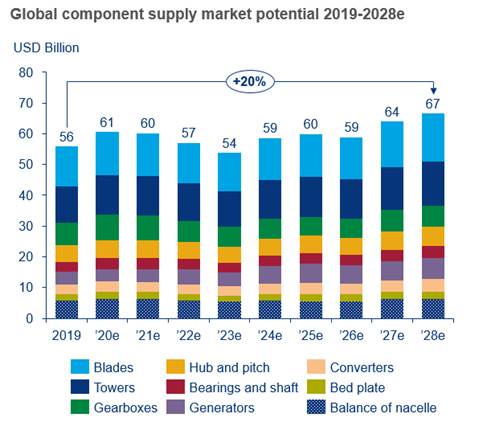 However, the COVID-19 virus presents some near-term hurdles for the wind turbine supply chain, despite the healthy outlook for the industry.

Rising combined peak wind demand to 44GW in the US and China is expected to strain the wind supply chain in 2020 and  a shortage of several critical components has been exacerbated by the coronavirus crisis.

“A rush in installation activity has caused a shortage of blades and bearings,” said Shashi Barla, Wood Mackenzie Principal Analyst.  “The coronavirus has jeopardized approximately 10-15 per cent of production volumes in China, Spain and Italy. However, Chinese companies resumed production in early March, resulting in a downgrade of only 3GW for 2020 installations.”

In the first quarter of 2020, just over $6 billion worth of turbines and component supply has been jeopardized, according to Barla.  “The coronavirus impact could worsen this if facilities continue to face delays in resuming production.”

Barla says turbine OEMs and suppliers can mitigate the impact by boosting manufacturing during the second half of 2020 and relocating supply to other markets, including India and Mexico.

Wood Mac says US federal Production Tax Credit phaseout post-2020 will spur demand for nearly 5,000 wind towers this year which is expected to compel turbine OEMs to increase tower imports into the US, despite anti-dumping duties.

“The US Department of Commerce slapped preliminary anti-dumping rates on these four countries in 2020, ranging from 5.04 per cent to 65.96 per cent, to create a level playing field for domestic tower suppliers,” said Barla.

Barla added “A surge in demand will force turbine OEMs to continue imports into the US, incurring additional import duty costs between $60-90 million in 2020. Turbine OEMs will be forced to absorb the additional costs and renegotiate contracts with asset owners.”

Over the past six years, US tower imports from Canada, Indonesia, South Korea and Vietnam surpassed a combined total of $900 million.