This article was published by the Canada Energy Regulator on Feb 24, 2021.

In ICEVs, fuels like diesel and gasoline are ignited so the expanding gas pushes pistons to create motion. However, only 12 per cent to 30 per cent of the energy in gasoline is used to move a vehicle, with most of the remaining energy lost as heat.

BEVs, on the other hand, have electric motors, which use almost all of the energy in electricity to move the vehicle. BEVs also use “regenerative braking”, where, to slow down, the vehicle’s brakes convert kinetic energy (or motion) into electricity and store it in BEV batteries. Altogether, BEVs are far more efficient than ICEVs, with over 77 per cent of the energy in electricity converted into movement when including regenerative braking.

Hybrid-electric vehicles (HEVs) are powered by both an electric motor and an internal combustion engine.(3) As a result, they are generally more efficient that ICEVs but less efficient than most BEVs.

Figure 2 shows the fuel economies of BEVs, ICEVs, and HEVs for sale in Canada in 2021 in litres equivalent per 100 km (Le/100km) driven.(4) Fuel-economy testing for these vehicles consists of five stages, including some cold weather conditions (with temperatures down to -7 °C).

Still, even if a BEV’s fuel economy falls by 50 per cent, it would still have better fuel economy than comparable ICEVs.

While more fuel efficient, BEVs currently cost more to buy than comparable ICEVs. This makes it more complicated to determine if a BEV’s lower fuel costs saves an owner money versus buying an ICEV. It is also worth noting that Canada’s personal vehicle fleet is typically heavier and larger than in other countries. This means the average personal vehicle owned by Canadians ranks amongst the worst in the world in fuel economy. 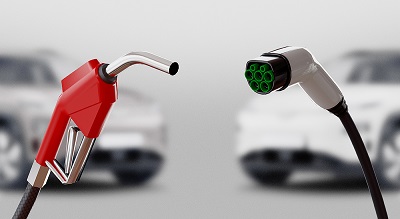 1. Not including hybrid-electric or plug-in hybrid electric vehicles.
2. From battery to wheels for BEVs and tank to wheels for ICEVs. Natural Resource Canada’s fuel economy data do not include energy losses upstream of the vehicle, such as during electricity generation, transmission, and distribution or refining of crude oil.
3. HEVs can include plug-in hybrid-electric vehicles (PHEVs), though these are not included in Figure 2. This is because PHEV fuel economies are more difficult to compare. PHEVs can operate entirely on their batteries for daily needs of most Canadians, often giving them fuel economies similar to BEVs. However, for longer trips, when the ICE motor must be engaged, fuel economies will fall, likely toward those of HEVs.
4. Natural Resources Canada converts kW.h/100km fuel economy for BEVs to Le/100km by assuming each litre of gasoline contains 8.9 kW.h of electric energy.