Fuelled by public policy and declining battery costs, global electric bus adoption is set to triple by 2025. And according to new research from Wood Mackenzie, the Chinese market will surpass the 1 million e-bus mark by 2023 and reach 1.3 million by 2025.

Through 2018, China dominated the heavy-duty electric vehicle (EV) segment, accounting for 98 per cent of the global e-bus market. To support this high concentration of e-bus use, a total of more than 50,000 e-bus charging points will be installed by the end of 2019 and this figure is set to more than double by the end of 2025. 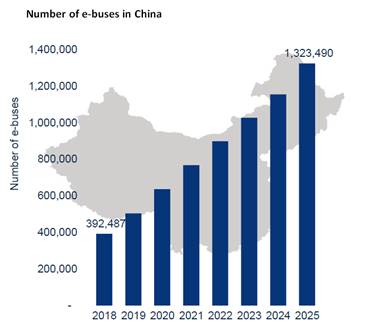 Timotej Gavrilovic, Wood Mackenzie Contributing Research Analyst, said “In 2018, 23 per cent of bus purchases in China were electric.”  He added “Overall bus purchases in the country are expected to remain stable, with 420,000 new purchases by 2025.”

Electric bus purchases are expected to increase along with further market growth and continuing government support, reaching 40 per cent of new bus purchases globally in 2040.

US and Europe e-bus markets to see growth post-2025

According to the Wood Mackenzie research, a combined 40,000 electric heavy-duty vehicles will be on the roads in the US and Europe by 2025.

The current market will expand to 7,300 e-buses by the end of 2019, representing pilot schemes across both regions that will add up to nearly $6 billion in market value.

“Most transit and school bus operators are still wary of e-buses as a new technology and will continue testing the equipment prior to investing in scaling current deployments,” said Gavrilovic. But, he added that government and transit agencies have clean transportation targets that should accelerate growth beyond 2025.

According to Gavrilovic, long-haul e-buses are not expected to enter the market before 2023 and will likely be limited to 1 per cent of new sales through 2025. European e-bus growth is driven by urban bus deployments, while the US market is driven by transit and school e-buses.

Along with government, school bus operators and transit agencies, US and European utilities are beginning to examine new models to support clustered charging at depots and are encouraging operators to manage charging for the benefit of the grid.

Gavrilovic said Dominion Virginia Power recently offered the most aggressive proposal yet to develop the charging infrastructure and pay the cost difference between a diesel bus and an electric bus for 100 per cent of all diesel bus replacements in their service territory by 2030.

Charging infrastructure deployment limited in US and Europe

The deployment of e-bus charging infrastructure has already started to surge in China. Meanwhile, growth in the US and Europe is limited by the size of existing pilots, where one to five charging points are typically enough to support several buses. Despite this, the total number of charging points for all three regions will more than double to a total of 108,000 charging points by 2025. 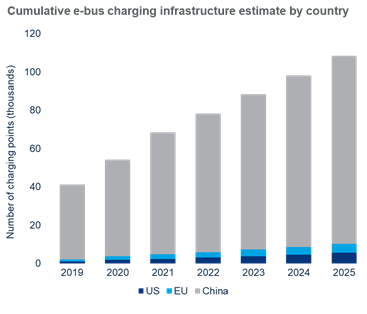 “Following larger deployments of e-buses beyond 2025, and potential synergies with e-truck and e-fleet charging, a higher e-bus-to-EVSE ratio can be expected. This would lead to a slower rate of growth for infrastructure in relation to bus demand.”

Gavrilovic says the Wood Mackenzie forecasts assumes all e-bus chargers are depot chargers, which in practice, may not always be the case.  On-route charging will represent a fraction of the chargers deployed.

“On-route charging will most commonly be used in intracity transit applications, as their routes are pre-determined. A higher percentage of on-route chargers will increase the number of charging points deployed per bus and lower the battery size required for buses to operate,” said Gavrilovic.