This article was published by Pembina Institute on Sept. 16, 2020.

In its 2020 annual energy outlook, energy giant BP predicts a “fundamental restructuring” of the global energy system in order to decarbonize. The world, it says, is on an unsustainable path, and delays in policy and behaviour shifts will result in significant economic costs and disruptions.

While the outlook projects the global energy demand to increase throughout 2050, the structure of the energy demand is likely to evolve in the coming decades, with a declining role for fossil fuels compensated by an increasing role for electricity and renewable energy.

To explore the energy transition through 2050, BP developed three scenarios: business-as-usual, rapid transition (70 per cent emissions reduction by 2050), and achieving net-zero emissions by 2050. Only the latter two of BP’s scenarios are consistent with limiting global temperature rises to 2°C and 1.5°C respectively. (According to the 2018 Intergovernmental Panel on Climate Change (IPCC) special report, 1.5°C is the maximum warming we can accept for a “safer” world. This would require a decline in global carbon (CO2) emissions of 45 per cent from 2010 levels by 2030, and net-zero by 2050.)

What does this mean in terms of restructuring energy systems? In the net-zero scenario, the share of primary energy sources changes significantly, with fossils fuels’ share declining from the current 85 to 20 per cent and renewables growing from 5 to 60 per cent by 2050. 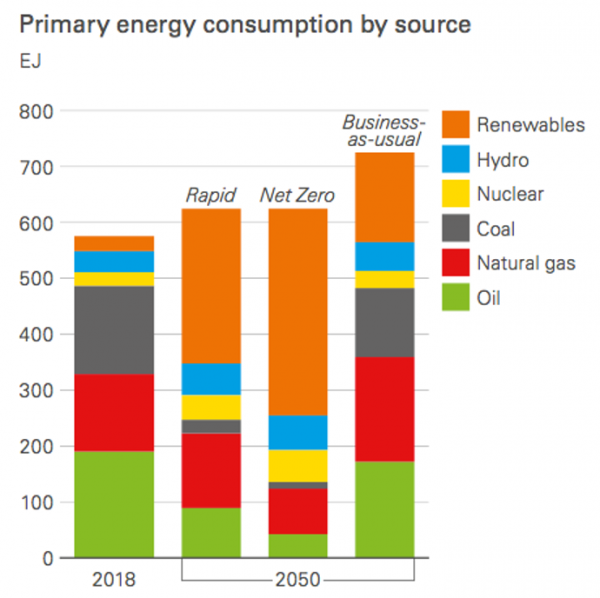 In all three scenarios, BP shows that global oil demand will decline between now and 2050 (below left). What’s more, BP predicts non-OPEC (Organization of the Petroleum Exporting Countries) countries — like Canada — will be impacted the most between 2030 and 2050 by a decline in oil production (below right). GHG emissions from remaining oil production in rapid and net-zero scenarios are offset by negative emissions technologies, such as carbon capture, utilization and storage; bio-energy with carbon capture and storage; and nature-based solutions.

Furthermore, BP explains that carbon intensity will be a major driver of the competitiveness of crudes, thereby shrinking the market share of carbon-intensive crudes. Our recent report, Oilsands in a carbon-constrained Canada, shows most of Canada’s oil production comes from the oil sands, which are on average more carbon intensive than lighter/conventional sources of oil. As a result, Canada has some work to do to prepare for the impending competition – and maintain market share. 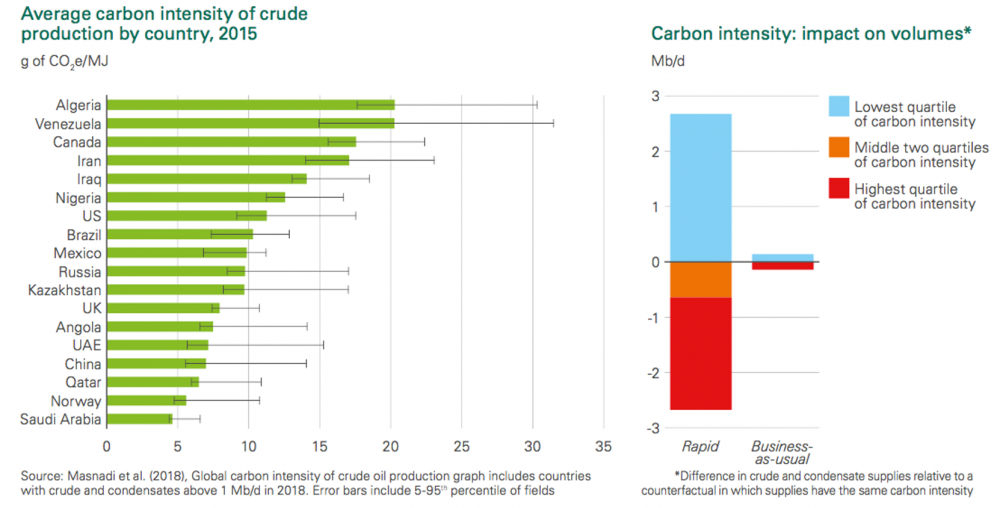 So, where does BP see energy growth? According to BP’s scenarios, renewable energy dominates the growth of the power generation sector with coal use decreasing dramatically (below left). These scenarios predict a dramatic drop in costs of wind and solar energy (below right).

According to BP, hydrogen will also play an important complementary role to electrification, by reducing the carbon emissions from hard-to-abate sectors such as long-haul transportation and heavy industry. Low- and zero-carbon hydrogen will represent between 7 and 16 per cent of energy consumption by 2050 in the 70 per cent reductions by 2050 (rapid transition) and net-zero by 2050 scenarios. (Check out our webinar series on hydrogen and renewable natural gas.) 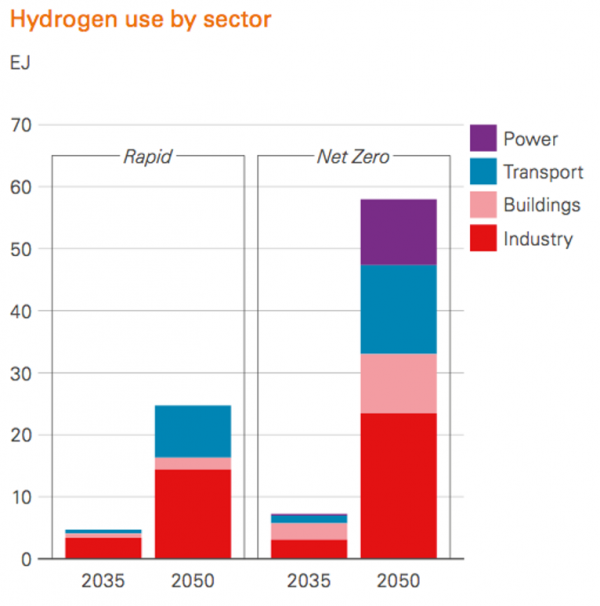 BP’s net-zero energy outlook illustrates a possible pathway to limit temperature increase to 1.5°C. For Canada to remain competitive as oil demand continues to decline, industry, governments and civil society need to work together to develop policies that will enable rapid deployment of clean technology and behaviour changes that will make the energy transition a reality.