This article was published by Pembina Institute on Jan. 9, 2020. 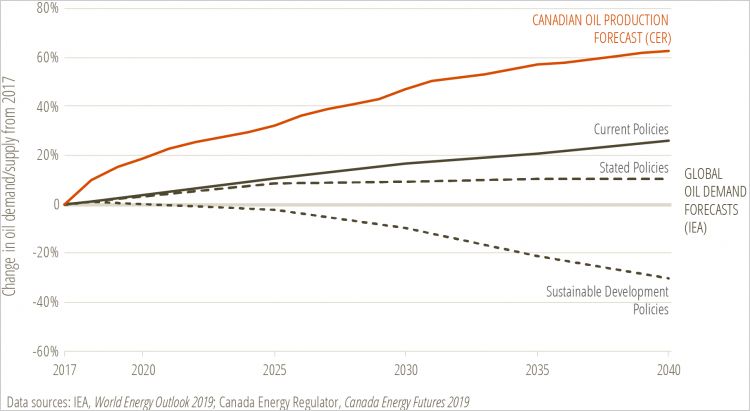 The report findings may surprise you — as the federal government commits to net carbon neutrality by 2050, the federal energy regulator is projecting crude oil production in Canada will increase by nearly 50 per cent by 2040.

How does the government’s long-term decarbonization plan square with its projections for energy production? The simple answer is that it doesn’t. The report’s implication is that Canada will blow past our climate targets as our oil and gas sector effectively continues on a business-as-usual trajectory.

The report’s assumptions don’t take into account future climate policies nor does it project adoption of new disruptive technologies and shifting market demands (including for increasingly decarbonized energy sources). According to the findings, renewables and electrification – including transportation – see only modest growth to 2040.

While the report clearly highlights the current tension Canada is facing between the necessary climate action and an expanding fossil fuel sector, it is more than a mirror on disparate, and likely incompatible, priorities. The report has real implications for federal planning and decision-making and, perhaps most significantly, the overall vision of the energy sector in this country.

Predicting more of the same

The key issue with the CER projections is that they miss important global market shifts and imminent disruptions in the energy sector.

Even the rather conservative outlook from International Energy Agency (IEA) tells a very different story of the role of fossil fuels in the next decade.

The graph below illustrates the relative growth rates of crude oil production against three IEA scenarios. Even under the current policies scenario (effectively business-as-usual), the IEA predicts a much slower growth rate than the CER predicts for Canada’s crude oil.

Adding in policy goals that have been announced but not implemented (stated policies scenario) shows global crude production with a much reduced rate of growth until 2040. 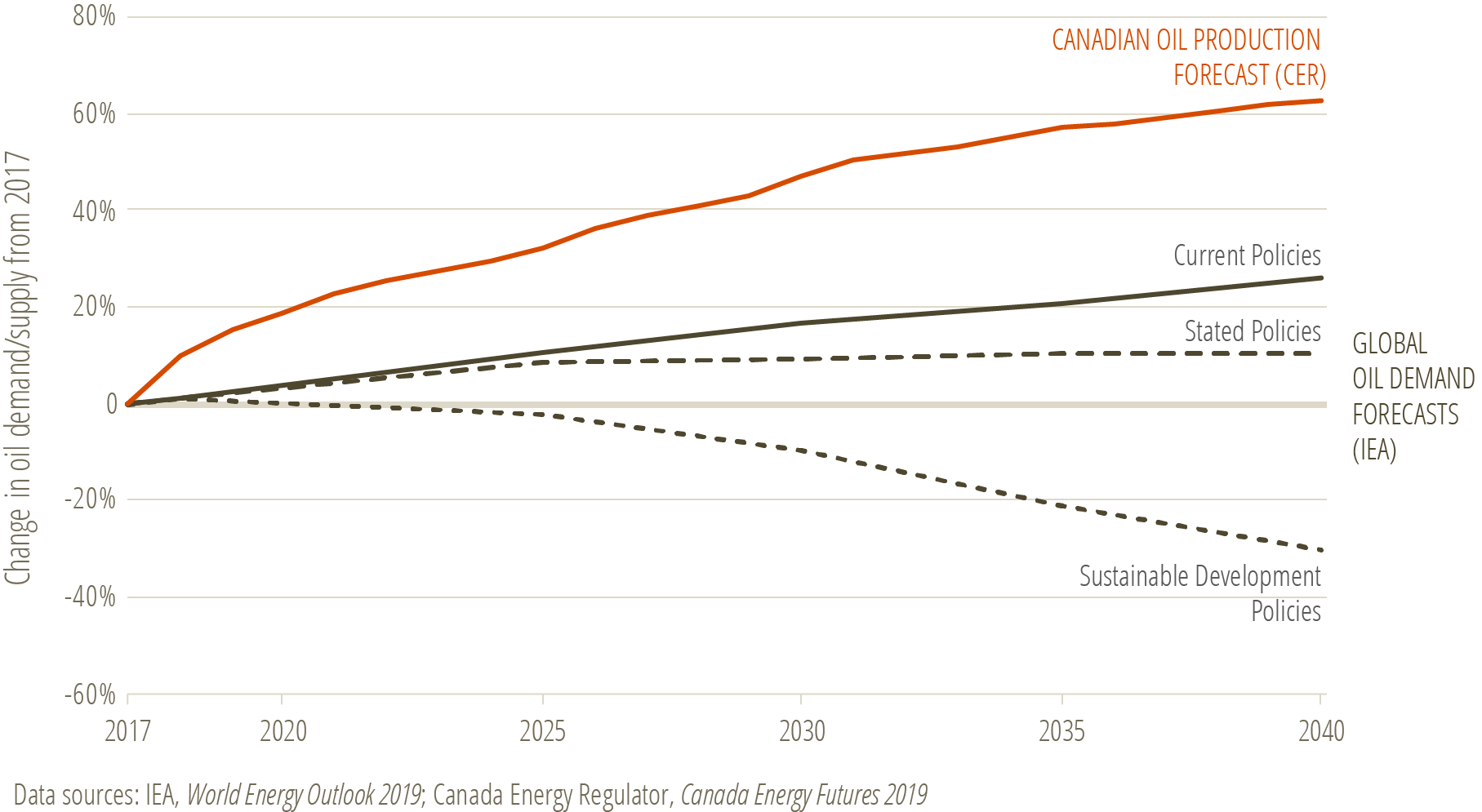 How does the CER reach the conclusion that the growth of Canadian crude oil production will outpace global demand growth? There are a number of conservative assumptions that factor into that projection, but the underlying issue is that the CER projection does not envision systemic or structural change in either domestic or global energy markets over the next 20 years.

According to the CER, reduced global demand for oil, potentially significantly reduced if the world achieves its commitments under the Paris Agreement (sustainable development policies scenario), does not influence growth rates for Canadian production.

This is particularly problematic since so much of Canadian-produced oil and gas is exported. At the same time, the CER projection only shows a (very) modest drop in domestic use of oil in the next 20 years.

You just need to take a cursory glance at business and energy news headlines to know this is missing the structural transition underway. The world is moving to more energy efficient homes, and more fuel efficient and electric vehicles.

An equally important story here is the assumption of the slow growth of renewables. It is a far cry from the federal government’s 2030 goal of 90 per cent non-emitting electricity generation, and it also seriously underestimates the impact of cost reductions in both renewables and battery technology.

According to the report, wind and solar are only projected to grow from 5 per cent of the electricity mix in 2017 to 10 per cent in 2040. Not only is this counter to the federal government’s own targets, its counter to the growing global understanding that renewables are a surefire investment — clean electricity portfolios are emerging as the lowest cost approach to electricity generation.

Our research shows this to be the case even in Alberta with abundant, low-cost natural gas.

Why we need to reframe the issue

Canada’s Energy Future 2019 reveals the fundamentally conservative and arguably problematic approach to projecting energy supply and demand based on past behaviour. This is not a problem that is limited to the CER, it is inherently difficult to model disruption.

But the danger in the CER’s approach is in creating the impression that business-as-usual is an option. It implies that without specific policy intervention, Canada’s energy future will actually look like the CER’s projections.

With electric vehicles on the cusp of mainstream adoption and dramatic year-over-year reductions in battery technologies we know that the future of energy is anything but business-as-usual. Change is coming due to global trends that are related to, but not dependent on, climate action.

The CER could play an important role in guiding the country through the energy transition that is underway. To start, it should create energy supply and demand scenarios that assume global temperatures are held to 1.5 degrees Celsius, and set Canada up to do its fair share to reduce global emissions.

This would help Canada’s energy sector successfully navigate the coming transition by illustrating where the world could–and should–be going. It would also be an invaluable tool as we collectively map a course to the government’s commitment to mid-century decarbonization.

A Paris-compliant energy supply and demand scenario would be a means to not only plan for the change that is coming but also to proactively steer the Canadian economy towards success in the low-carbon energy future.

In future instalments of this blog series, we will be delving into trends in the oil, gas, and electricity sectors and exploring how those sectors can prepare for the change ahead.