Markham: There was a lot of interest recently in Canada’s electric vehicle manufacturing industry. And we started off a little slow, but we’re we’re catching up now and I want to talk to Flavio Volpe, who is the head of the automotive parts manufacturers association, about a really interesting project that he’s working on.

Why don’t you just give us an overview of project.

Flavio: In March, 2019, I was a guest of Prime Minister at the Throne speech in Ottawa. I sat there in the Senate chamber and listened to the speech, which talked about a net-zero emissions target for the Canadian economy by 2050 and how are you going to get there and start thinking about it now it’s, it’s sooner than you think.

I got back to the office and was thinking about our work on technology demonstration fleets for the past five or six years. We took cars, usually Lexuses that are made in Ontario, and we’d say to our members who had technology commercially ready technology to demonstrate, “why don’t we put them on those fleet Lexuses and we’ll take them everywhere – consumer electronics show in Las Vegas or tech demonstrations?”

Why don’t we put our money where our mouth is on this claim that in Canada we make every single part of the vehicle components everything from the wheels to the drive line, to body, to power electronics, to alternative propulsion?

So we came up with this idea that we would launch an all-Canadian designed, engineered and supplied Zero-Emission lightweight vehicle. We borrowed shamelessly from one of the other Canadian myths and called it Project Arrow.

That was the genesis of Project Arrow and we’ve now got 380 companies that want to do it with us.

Markham: This is a concept electric vehicle launched it at the consumer electronics show in Las Vegas in January. And you have a schedule here for rolling it out on tour in 2022. 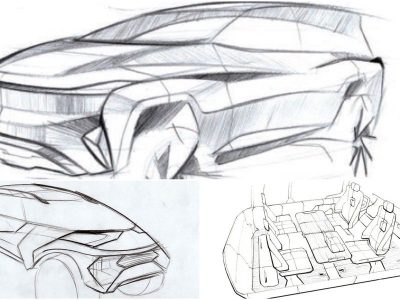 Flavio: We launched in January, 2020, we did a design competition that resulted in a design in October of 2020, went for request for proposals. We hired a chief engineer of special projects from Aston Martin to be our chief engineer and hired the former CTO at McLaren and put together a team.

We’ve got a schedule that puts a car together at the end of 2022. And we go back to Consumer Electronics Show in January of 2023, but we’re also building a virtual twin and a digital twin virtual for promotion.

Markham: Now I understand how you design this digitally. Industry is well set up for that. How do you put together the prototype?

Flavio: So first of all, you hire somebody like a Fraser Dunn, who with Aston Martin over 19 years put together a lot of short-run vehicles, including the Bond cars for the 007 films. Then of course, the companies that we’re dealing with and that we represent are Tier 1 suppliers and Tier 2 suppliers to original equipment manufacturers.

And so what we’re working with is put together the engineering and then we work backwards with the companies that’ll make the components. The ones that are that go on the surfaces of course, has to be a custom tool made. But a lot of the other systems they kind of mix and match and get into place.

Building a physical car is not an issue. We have enough time to do it. But what do you do with it?

And we’re going to go out and promote Canadian suppliers around the world. But it’s that digital twin that’s really important. I want to show people that look, Hey, by the way, this is a production capable configuration. And does somebody want to build it? You know, we’re a trade association, I’m happy to partner with someone to build it, but I’m also putting together notes that we’re going to give to everybody. We are doing all the homework and we think there should be a startup culture here just like there is in Silicon valley. We’ve got the technology and we we’re better at cars.

Markham: I want to ask you about that because I’ve been arguing for a couple of years now that the there’s a difference in electric vehicle manufacturing, that it’s a simpler to manufacture, which could allow Canadian startups to make niche vehicles for things like, you know, who are cold weather resource industries, forest mining, and oil and gas.

Is that what you’re getting at?

Flavio: Well, certainly, you know the electric powertrain of course, is a lot simpler than internal combustion technology. The DNA of vehicles, 95% are the same, but it allows for those like companies like Miller technologies that makes off-road vehicles for mining use in in in the, the Northern mining regions of Canada to be able to play in on an electric vehicle mass electric vehicles.

There’s a lot of companies and we know some of them like Electrameccanica or a company being started by Frank Stronach, who was the original founder of magnet city cars. It is the evolution of vehicles through the electric or zero emission technology evolution, but also the way that governments around the world are treating vehicles, low speed vehicle, neighborhood vehicles. Off-Road, on-road.

All things that started with, you know, the, for me, one of the parting points is the congestion charge in the city of London, you know, 15 or so years ago governments are very important to how consumers relationships with their vehicles what those dynamics are. And I think electric vehicles or fuel cell vehicles helped to enable a whole bunch of other technologies and a bunch of other skills that Canada’s really, really good at. We’ve got the natural resource, but we’re also very, very skilled at at information technology. And of course we are currently the global headquarters of artificial intelligence and machine learning.

The opportunities are endless,

Markham: Well, let’s talk about project arrow because I’m kind of keen to get into the technical side of this thing, right? So walk us through the, the drive, train, the battery size and type what kind of a vehicle is.

Flavio: It’s a CUV platform and we’re still doing some of the engineering. So if we check back in three to six months, we’ll have it exactly.

It is the size of an Acura MDX or a Lexus RX. We are of course going to zero emissions. We’re deciding we’re very likely to go battery.

We’re also very cognizant of the, the amount of interest we have from the fuel cell sector here in Canada. We’re likely going to do is we’re going to do a battery electric vehicle with with a a standard range. You know, our targets are 500 kilometers. We’re looking at different types of of chemistry’s very interested in in a Canadian company that just announced a lithium-ion battery enhanced by graphene.

This isn’t just zero emission vehicle. We wanted to feature all of the autonomous-connected interactive technologies that are available here in Canada.

One of the orientations we’re going to have on the vehicle is the vehicle as a “caregiver.” You know a lot that happens in a digital world versus an analog world is an analog world. There is a time where a, a driver is either short or long-term incapacitated or unable at the very least to meet the, the, the standards of safety to be on the road.

It what we’re doing is building to the 2025 year model, your specs, we’re going to take no shortcuts. It is a vehicle and a concept that will be that will adhere to Canadian motor vehicle safety standards. And what we can do in the, in the concept is about this much in terms of those standards, but on the digital twin, we’re going right to the end. It’s the challenge we made to our suppliers to say, this isn’t a science experiment. If you’re going to feature something on this, make sure it’s available for sale, because we’re going to feature it to all the OEMs that we deal with and currently have listed that we deal with a numbers 21.

Well one of the things I keep hearing from the experts that I interviewed around electric vehicles, batteries, and so on is the technology is changing very, very rapidly, right? And, and so I think, and again, this is something I’m often told that by the time we get to 2030, and we look back on 2021, we’ll be astonished at the, how much has changed. And this seems to be a, an observation that holds true in the in the automotive sector and the sector. Give me one or two examples of things that, you know, the average consumer maybe wouldn’t be aware of, but will be designed into your car that will be kind of, you know, astonishing or, or, you know, we’ll be amazed.

Flavio: One of the things that are you trying to get me to scoot myself. One of the things that that is a challenge and historically been a challenge for electric vehicles is what do you do with the battery? How does it affect the driving dynamics? And of course, we’ve all come to the conclusion that we’re going to build skateboards. One of the things we’re looking at is Kendi engineering support some of that battery chemistry being in the structural components of the vehicle, therefore allowing you to do a different and more of an analog driving experience and to be able to position the vehicles interior in a way, such a way that not only are we featuring zero emission technology, what we’re trying to do is also give a window into a driverless technology, driverless future.

And we may come out as a level three, but then we want to give it a window to level five. So what you’ll see in this vehicle, when we put it on tour is that we’ve put as much thought into the interior, the ergonomics of the interior, what a vehicle of the future looks like. And then what can that enable both in terms of how it, how your seats in the interior can reconfigure itself, but also in which a lot of the technology that we are, we all think about that will connect with infrastructure and other cars. No, it’s gonna, we’ve got a whole bunch of technologies that face the driver and the passengers that make for a, a we hope that people will see a very different experience.