Summary: Markham interviews Dr. Sara Hastings-Simon of the University of Calgary about the effect of countries adopting policies required to achieve net-zero by 2050 would have on Canadian oil and gas, which is dominated by the Alberta oil sands.

Markham Hislop: It’s May 18th and we’re doing another interview about the international energy. Agency’s new that zero by 2050 pathways report. We’ll be talking to Dr. Sarah Hastings-Simon of the University of Calgary about the Canadian oil and gas industry and how, if that scenario becomes the objective of global governments, what implications are there for Canada? 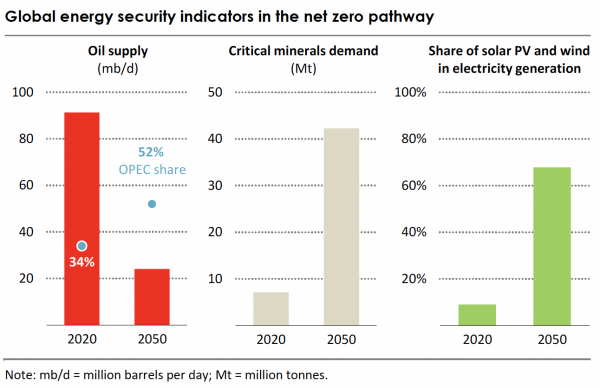 Sara Hastings-Simon: Yes, I think that’s right. What the IEA released today, this net zero scenario is, you know, one scenario of many. I often say that a scenario is not a forecast and that’s something that I think is often misunderstood in this conversation. It’s one potential future that could play out.

Scenarios are really useful because they allow companies as well as policy makers to test future plans. And so what this scenario today is telling us is that if the world you know, acts in a way to avoid the worst impacts of climate change, if they are successful at doing so then the demands for oil and gas and coal will decrease quite dramatically over the next couple of decades.

And that is a more aggressive decline certainly than any of the Canadian scenarios we have been planning for. And it would be as you say, it would be highly problematic for the sector within Canada.

Markham: Now I had an article published in Alberta Views magazine for which I interviewed Janet Annesley, who was then a senior vice-president for Husky Energy, which has since been merged with Cenovus. And in it, she talked about their scenario modelling and she said their best case scenario, their strategy, is to reduce operating costs between now and 2050, and gradually reduce our greenhouse gas emissions.

The company is not going to invest in, you know, electricity generation like wind and solar farms, any of that kind of stuff. It’s stick to your knitting, get your costs down, get your emissions down.

And, and aside from Suncor, which has a slightly different wrinkle on this, because they do invest in some renewables and so on, that seems to be the approach that most, almost all Canadian oil and gas companies are taking. If global governments commit to the IEA net-zero by 2050 pathways that we’re talking about, that sounds like it spells big trouble for the Canadian oil and gas modelling scenarios.

And you know, in a world where whale and gas demand stays relatively flat you know, I think there is a fair amount of credibility to that to such a strategy, right? So the idea that you, you know, you try to compete on, on costs and you remain a part of that mix. And so the, really the, the key thing then is what happens when that amount of demand starts to decline.

And that’s what we’re seeing differently in this scenario that came out from the IEA today.

One thing I’ll note is that, you know, I think the, the, the messenger is as equally important as the message in this case. The net zero scenario is certainly not the first scenario that we have seen which is a net zero scenario, which shows a dramatic decline in oil and gas coming from, you know, trusted providers of, of such energy scenarios. 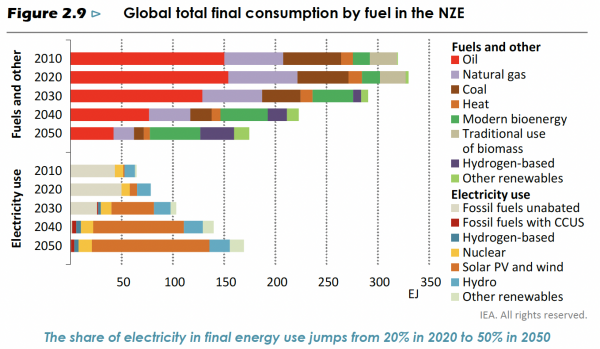 But it’s the first time that the IEA has come out and and said something like this. And I think that that’s you know, that that’s meaningful because I think, you know, historically they have really been sort of one of the most cited energy scenario providers by international governments. They’ve also been of course, one of the more conservative in terms of future demand for oil and gas.

And it’s interesting that in the run-up to this, they did release some forecasts for or some projections future solar and wind growth. And after, you know, many, many years of sort of under forecasting growth they’ve actually really dramatically increased these projections. But what was interesting is that they called this a, you know, a more aggressive, but new normal. So it really seems to me that there is a bit of a shift in the thinking within the IEA around those those forward-looking scenarios.

Yeah, we should point out that the IEA is, I think it’s entirely funded by governments. If I understand correctly, the American government being the biggest one and therefore that advice in their projections and so on are paid a lot of heat by governments.

And the Canadian government’s attitude here, their approach to oil and gas has been very interesting and criticized by many environmental groups, because essentially what they’ve done is, is taken almost the IEA stance that there will be a very gradual, transition away from gas but a little more quickly for oil .

The Justin Trudeau government has taken a fairly hands-off and gentle approach, I think, to the oil and gas industry. And I wonder if you think that if there is a new normal come out of COP26, if that might change?

But I think what we’re seeing is that there is an increased likelihood that we do get on something resembling this net zero pathway, whether it’s exactly that or, or close to it. And what that really tells us is that, you know, if, if there is a real chance that this is what the future looks like, then Canada and Alberta you know, better have an economic plan that is robust, and that is going to create a prosperous future for the province and the country in a world where the demand for oil and gas declines rapidly.

And until now, you know, we haven’t seen that. We hear a lot about you know, Canada is only going to be able to be prosperous if it has a strong oil and gas sector. And I think that kind of language is, is, you know, that’s concerning in the light of these additional scenarios coming up, because it’s really saying, you know, if you take it at face value, are you really saying, you know, either the world fails to act on climate or Canada has a grim economic future, and I certainly don’t want to live in either of those worlds. And so I think increasingly what we need is planning for this future, where oil and gas demand is declining. And you know, as, as one of many,

Markham: Now I want to ask you a related question because if we’re going to plan for the decline of oil and gas, well, the IAA scenario says that we also will see the rise of electricity and the estimates that I’ve seen suggest that most national economies, including Canada will use by 2050, maybe two times as much electricity, possibly as much as three times electricity. And so the question then becomes is our national electricity system up to the task. And I’m writing a series of articles in which I argue it is not, it is basically designed for a 20th century economy, not for the scenario we’re talking about and that there are a lot of problems to be fixed.

What’s your take on that?

Sara: I mean, clearly we’re going to need more electricity. And so we are going to need to grow both the amount of generation that we have as well as, you know, the transmission and distribution systems. I will note that the kind of growth that we’re talking about in the piece of growth and the demand for electricity is something that we experienced previously, right?

And so we’ve been living in sort of this couple of decades now across north America with a relatively stagnant, and even in some cases declining demand for electricity due to improvements energy efficiency improvements. And so, so sort of a world where you’re seeing the increased demand for electricity might feel a little unfamiliar, but we only have to go back you know, a few more decades before that to see that north America, Canada, and the U S with building out an electricity system that was meeting that growing demand.

So I do have you know, I don’t want to underplay the, the investment that’s needed in the work that’s needed, but I think it’s important to put it in the context and understand that this is not a, you know, fundamentally unachievable goal. If we put our mind to it, the other, the other piece here is where you know, kind of thermodynamics comes back into it.

And, and we have to be really careful when we’re talking about energy. We are often looking at primary energy. And so the amount of primary energy that goes into our energy systems and move more using oil and gas when we’re burning fossil fuels for heat only a portion, only a fraction of that energy is actually useful. You know, we can use it to move our cars or move our machines or things like that.

And so when we are talking about electrify and electrified future, where there’s actually quite a bit of efficiency gains that you can get in there. And so the, the overall challenge itself looks somewhat less daunting. I think when when we also understand that it, we don’t need to replace one for one, every unit of primary energy that we get from fossil fuels today.