The Alberta energy war room – err, Canadian Energy Centre – was officially launched Wednesday by Premier Jason Kenney. He says the purpose of the Centre is pushing back against activist lies and disinformation, educating Canadians, and hosting research. We say it’s a $30 million propaganda machine. 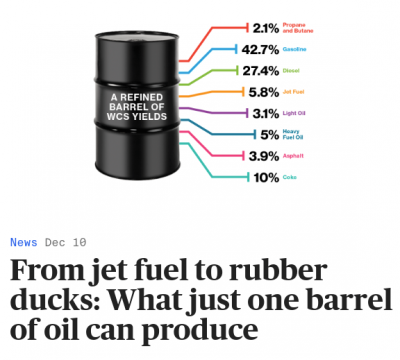 Here’s a sample of articles from the Centre’s website:

“If you care about climate change, here’s why you should support Canadian natural gas”.

“From jet fuel to rubber ducks: What just one barrel of oil can produce”.

If you think those headlines could have been ripped from the Calgary Sun, there’s a good reason – CEO Tom Olsen is an old Postmedia hack who ended his career as the Progressive Conservative columnist with the Calgary Herald in 2008 to become PC Premier Ed Stelmach’s director of communications. This spring he ran as the United Conservative candidate for Calgary-Buffalo in the provincial election.

If you think those headlines are bad, watch the Centre’s video, Canadian energy makes the world a better place. Madison Avenue has nothing on this 150 seconds of agitprop and spin. Wait, didn’t the Premier say this was about truth and accuracy?

What, then, do we make of this thigh-slapper from the video?

We are creating a new energy mix, a cleaner energy supply, and we could be doing this everywhere, lowering our footprint while looking to expand our production and export our products and knowledge around the world to serve others because we understand the global challenges ahead. 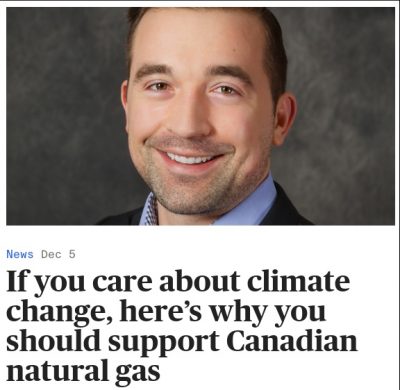 The oil sands account for 80 per cent of Alberta’s crude oil and last I looked, bitumen was far more carbon-intense than US shale oil, for example. New technologies and investments in greater efficiency are slowly lowering that carbon-intensity, and there is plenty of room to lower it even more, but there is still much to be done.

When oil and gas producers agreed in 2015 to reduce methane emissions 45 per cent by 2025, government and industry didn’t even know how to properly measure the emissions. “We know methane leaks are occurring – but we don’t always know where or how much,” according to the CMC Research Institutes. Since methane is up to 80 times more potent than carbon dioxide as a greenhouse gas, how can the Centre claim a “cleaner energy supply” without data to prove it?

Frankly, the claim of a new, cleaner “energy mix” is false and misleading. That trend continues throughout the video and the articles sampled for this column. How will Albertans square the Centre’s obvious disdain for accuracy with Premier Kenney’s claim that Olsen’s war room is in the truth business?

“Why did we commit in this last spring election to establish the Canadian Energy Centre? Because we were not doing nearly enough to tell the truth in response to a campaign of lies,” Premier Kenney said during the Centre’s launch at SAIT.

What is the UCP government really up to? Two things, both of them misguided.

One, Kenney is deliberately chilling public dissent, even though he denies it. “Nobody is proposing to trample on anybody’s free speech,” Kenney says. “If there are organizations that use their free speech to put misinformation into the public square, we will respond…That’s called public discourse.” 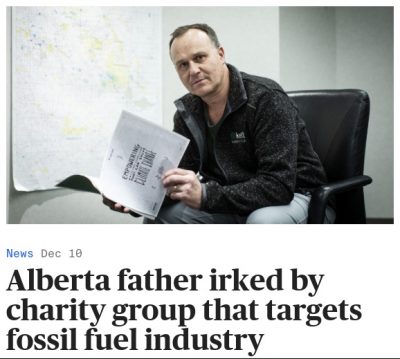 He might be able to make that argument if the Centre is viewed in isolation, but not when considered as part of the UCP government’s aggressive “push back strategy”: the $2.5 million public inquiry into anti-Alberta foreign-funded activism; funds for pro-pipeline First Nations to mount legal challenges against pipeline opponents; aggressive social media tactics by government ministers, their press secretaries, and hired guns like former Sun News Network executive Matt Wolf, who has already earned a reputation as an unpleasant Twitter troll making $200,000 on the public payroll.

Consider the early November submission to the inquiry from the venerable Muttart Foundation, which expressed concern that investigating the source of funding for Alberta charities might “raise fears amongst some about the ‘price’ to be paid for taking a position that is different than that of the government of the day.”

Raising fear among critics seems to be exactly what the Centre is designed to do.

Two, the war room is supporting the industry’s big campaign of its own to push back against change, to promote the idea that the status quo is good enough, that Alberta’s environmental standards are world-class, that displacing coal in Asia with Alberta natural gas in the form of LNG does more to fight climate changes than climate policy.

Check out the December issue of Business of Energy, whose release – coincidently? – was nicely timed to the war room launch. In a lengthy piece by editor Melanie Darbyshire titled, Getting the Message Out: Alberta’s Energy Industry Advocates for Itself, the whole sordid strategy is laid out for anyone who cares to look.

The obvious conclusion to those who closely follow energy issues is that the Canadian Energy Centre launch, the funding of new “grassroots” campaigns, and the more aggressive push by existing boosters like Calgary realtor Cody Battershill and his misguided Canada Action group, has been well coordinated.

Many Albertans won’t see a problem with this approach. In fact, they’ll cheer their government for following through on the campaign promise to defend Alberta and its oil and gas sector from attack.

But that’s not the government’s job. Nor should it be so deeply in the pockets of an industry it also regulates.

The most disturbing aspect of the energy war room, however, is the promise to speak “truth” that turns out to be as dishonest and deceptive as the “lies” supposedly told by the anti-pipeline/oil sands activists.

The Canadian Energy Centre could only be more disturbing if Kenney, Energy Minister Sonya Savage, and Olsen actually believe their own propaganda. Sadly, this is probably the case.